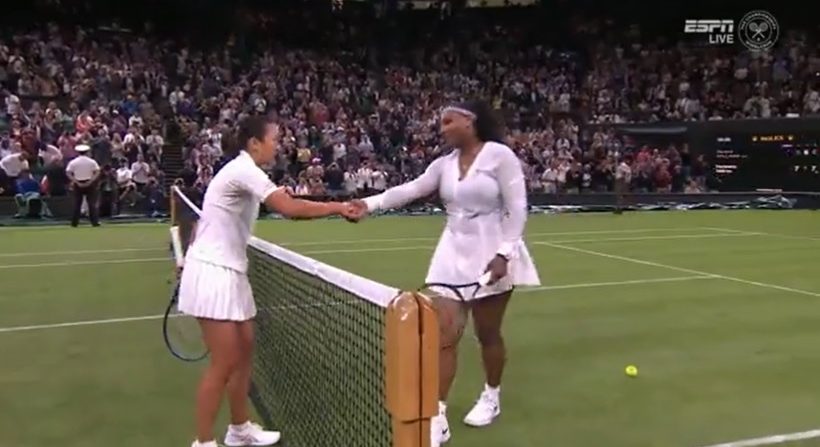 While it was her first singles match in a year, Serena Williams was favored to beat France’s Harmony Tan in the first round of Wimbledon. Instead, we saw a marathon match that ended in a big upset.

Tan opened the match with a 7-5 win in the first set. Williams not only evened the match in the second set but with a 6-1 win, appeared to give herself all the momentum needed for the third set. But that was not the case. The two players battled back-and-forth in the third but Williams fought through it to take a 5-4 lead with serve. But Tan broke Serena’s serve. Then, after holding serve to go up 6-5, nearly broke Williams again, getting to match point. Serena fought back from there, though, forcing a tiebreak.

Williams had the upper hand early in the tiebreaker, scoring the first four points. But Tan battled back to take a commanding 9-7 lead on serve. Serena couldn’t come back from there, as Tan held serve to win 10-7, pulling off the upset victory.

Serena Williams loses to Harmony Tan at Wimbledon in her first singles match in a year.🎾 pic.twitter.com/hzgEz2hhZF

It was only the third time in her career that Williams has lost a first-round match at a Grand Slam event and only the second time the match was completed.

Serena Williams loses in the opening round of a major for just the 3rd time.

The other two came at the 2012 French Open against Virginie Razzano and at last year's Wimbledon against Aliaksandra Sasnovich (retired due to a hamstring injury). pic.twitter.com/Xnd0hE3i4n

But given that she’d been off for a year and has nothing to prove in the sport, Serena’s effort in defeat earned well-deserved high praise.

What a legend @serenawilliams 🙌🏻 pic.twitter.com/cIV5zRtioG

This is a true champion at work.

Incredible desire from someone with absolutely nothing to prove.

Serena Williams you are unbelievable.

There are a number of things Serena Williams could be doing tonight. She has a great family, millions in the bank, 23 grand slams & successful businesses. But here she is, grinding and hustling for every ball on Centre Court. What an athlete… #Wimbledon

head high Serena, thanks for giving it all🙏🏻 pic.twitter.com/G7r9volRFh

Not to be this year, but she’ll be back. 🙏 @serenawilliams | #Wimbledon pic.twitter.com/fMQxrWJTfM

It was great to see you again 💪

Of course, there are two sides to every match. When the match was over, Tan admitted to being scared when she saw that she was matched up against Serena in the first round. But she didn’t play that way.

And while Serena deserved every bit of adulation that she received for her incredible effort, the same can be said for her opponent. Tan also received a lot of praise for her performance.

That was amazing sport, won’t lie I wanted Serena to win but my word Harmony Tan was incredible – bloody brilliant match. 🎾#Wimbledon2022 #SerenaWilliams

Oh my, Harmony Tan is victorious over Serena Williams at Wimbledon in an amazingly crazy match and the cute little kid in Harmony’s support team becomes an immediate iconic gif. Wonderful stuff, loved it #Wimbledon pic.twitter.com/iNSKAy1Sh4

I adore watching Serena Williams play and I’m sad to see her leave the tournament, but my god what a game from Harmony Tan at #Wimbledon2022 that was absolutely incredible to watch pic.twitter.com/67MaSlPKNJ

Harmony Tan I salute you. Phenomenal performance. Serena gave everything. One of the great Wimbledon matches. #Wimbledon2022

Regardless of how the rest of Wimbledon plays out, this will definitely be one of the more memorable moments from the tournament.