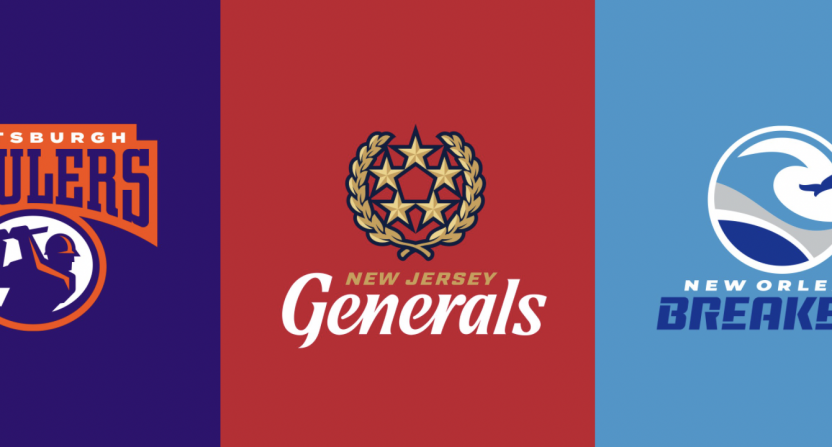 The new and improved USFL announced the eight teams that will play when the league starts in April 2022. All eight names should be familiar to anyone who remembers the original version of the league from the early 1980s.

The new-look USFL will be split into two divisions. The Michigan Panthers, New Jersey Generals, Philadelphia Stars, and Pittsburgh Maulers will play in the North Division. The Birmingham Stallions, Houston Gamblers, New Orleans Breakers, and Tampa Bay Bandits will play in the South Division.

USFL games will be played on Fox Sports, which also owns the league. The league’s corporate masthead is heavy on Fox Sports personnel, including Daryl Johnston and Mike Pereira.

While the names might be familiar, some of the team logos and color schemes have been updated for the modern era. We decided to break down each of them to determine which ones missed the mark and which ones are likely to be big merchandise sellers in the lead-up to the inaugural season.

We are the Philadelphia Stars ⭐️ pic.twitter.com/nWP9Kz6Hde

The color scheme just screams the late 70s/early 80s to us. And while that made a lot of sense in 1982, it feels a bit outdated now. We also don’t get a lot of “Philly” from this. The Liberty Bell is one thing, but Stars just feels super generic.

We are the Houston Gamblers 🎰 pic.twitter.com/VeO8N1nyTL

The longer you stare at the G with a Texas-sized hole in it, the weirder it looks. Also, the Block H with the laces feels a little “graphic design is our passion” in our opinion. Still, the color scheme might be basic but it’s solid. You can’t go too wrong with red and black. We have hope for the uniforms.

We are the Michigan Panthers 🐾 pic.twitter.com/SC1VuRDH07

The Panthers suffer from the fact that the NFL incorporated a Panthers team as well in the years between their first iteration and this one. So the name doesn’t exactly pop in 2021. The color scheme isn’t bad, it’s just muted in comparison to a lot of the other ones in the league. It also reminds us of some of the MAC directional Michigan schools, which isn’t a great mental association to go for when you’re trying to establish yourself as a strong pro team.

We are the New Jersey Generals 🎖 pic.twitter.com/QvK3M2Ac8t

The first of two USFL teams opting for a red & gold look, the Generals ranks slightly lower because the shade of gold feels a little outdated to us. Still, we appreciate that the five-star logo plays off the name well, and the secondary NJ logo is sure to be a big hit at Jersey Shore boardwalk t-shirt shops. Much like the New Jersey Turnpike, it’s not exciting but it gets us where we’re going.

We are the Birmingham Stallions 🐎 pic.twitter.com/LOUDD7Sa4m

We give the red and gold nod to Birmingham if only because the color scheme feels a little more modern, even if it makes us think they’re Southern Boston College. Stallion is one of those names and logos you can’t go too wrong with and you don’t have to work too hard to make it good. Again, that B logo screams Boston College, so they might want to consider something different down the road. Instead of the B, you’ve got the HAM just sitting there waiting to be used.

We are the Tampa Bay Bandits 🤠 pic.twitter.com/K3oR3dyfYj

The second red and black color scheme in the league, we’re giving a much higher ranking to the Bandits if only because the logo is more fun and it looks like they’ll be incorporating some gray and white in as well. The TB secondary logo almost looks like it says TTB, when it would have been cool if they’d found a way to make it TBB, but we’re nitpicking. Hopefully, they play up the bandit aspect more than the horse, to differentiate themselves from the Stallions.

We are the Pittsburgh Maulers ⚒ pic.twitter.com/kvQL4hY8uI

We love the Maulers for two reasons. One, the color scheme just pops. It’s not classic or vintage, like the Steelers, but you’re gonna notice that uniform. The name is fantastic, as a reference to the sledgehammer-wielding workers in steel foundries. It genuinely connects to the place the team represents (whereas many of the other names are generic) and the sledgehammers are a wildly underused logo item.

We are the New Orleans Breakers 🌊 pic.twitter.com/3MnzJGhc8N

It’s like the Tulane Green Wave, Miami Dolphins, and Tampa Bay Lightning had a logo baby. The colors are wonderful together, evoking something you don’t get very often in football. It fits the name perfectly, which ironically started in Boston but seems to fit the Gulf Coast much better. The NOLA secondary logo is a great repurposing as well. Let everyone else haggle over the reds, blacks, and golds. This mixture of blues and grays has us dying to see how the uniforms will turn out.