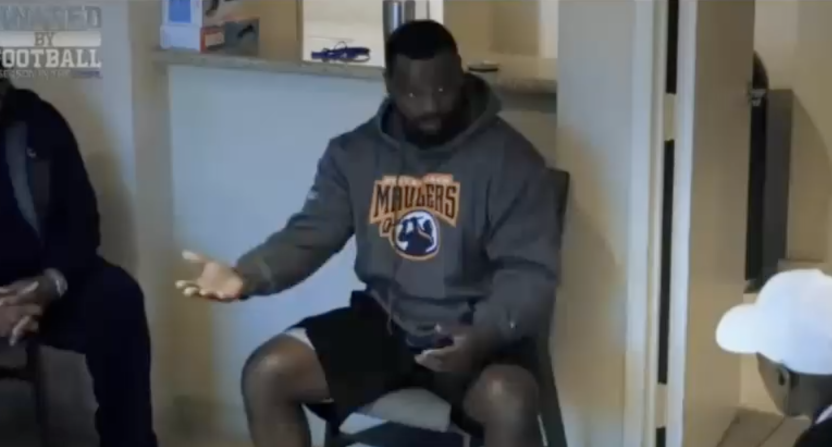 While the new-and-improved USFL began its initial season this weekend, the Pittsburgh Maulers did not get to play their season-opener, which was postponed due to weather. They’re rescheduled to begin play on Monday night but when they take the field, running back De’Veon Smith will not be among their players as he was recently cut for an extremely eye-opening reason.

The USFL released a documentary called United By Football: A Season in the USFL that showcases their teams in training camp, during practices, and behind the scenes in the lead-up to Week 1. In one specific clip in the documentary, we see Smith meeting with Pittsburgh head coach Kirby Wilson and other team officials when he is told that he’s been cut.

The stated reason for being cut? Because he wanted pizza instead of chicken salad from the hotel room service.

Bro got cut by a USFL team for ordering pizza instead of a chicken salad??? lmaoooo pic.twitter.com/Vo7n7HD0PU

“Any disrespect of football or members of staff, USFL, etc. will not be tolerated,” Wilson said. “He crossed the line, so we had to deal with it…Someone’s hurt feelings are a distant second to the greater good of the team. And we’ve moved on and turned that page, and I’m happy we did it.”

After he tells Smith that he’s been cut because he asked if he could get pizza instead of a chicken salad, he explained what happened in what sounds like a very rational explanation for this overblown decision.

Smith also tweeted out a reaction to the cut on the same day as well as adding one on Monday when the clip went viral.

In the annals of “football guy decisions,” this might be one of the most “football guy” of them all. Wilson takes his fairly benign incident and turns it into an epic metaphor for “disrespect” and “dishonor.” It’s also incredibly infantilizing and demoralizing. Imagine being a player in the USFL and seeing this go down. While Wilson clearly thinks his intentions are professional, they come off as childish.

The 27-year-old Smith played college ball for Michigan before spending time on NFL practice squads. He was also on the Orlando Apollos of the AAF and the Tampa Bay Vipers of the most recent version of the XFL. We’re guessing he’ll be focused on playing for the third iteration of the XFL next year so he can prove just how dumb and short-sighted this decision was.

In the meantime, reactions to the clip were pretty strong amongst sports fans on Twitter.

If so…why? They can’t possibly think this is good branding. https://t.co/ybMARgNaTJ

This is BS. Not a good look AT ALL! https://t.co/lUfkAtjssT

He could have not held the door for someone and got cut. @USFLMaulers just needed a reason. 🤦🏾‍♂️ https://t.co/SgLyrMiEi9

This makes NO sense https://t.co/t7fqqkOrJv