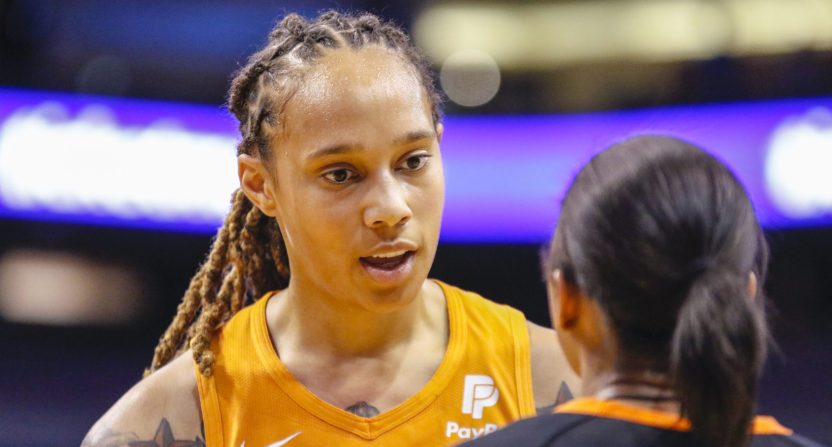 Controversial rapper Tekashi 6ix9ine, real name Daniel Hernandez, is currently in Russia interacting with fans. That comes following his early release from his two-year prison sentence, after he testified against his criminal coconspirators on racketeering charges.

While admittedly drunk, 6ix9ine took to Instagram to bash imprisoned American women’s basketball superstar Brittney Griner. Griner has been in Russian custody since February, when authorities allege she attempted to carry hashish oil in her luggage while traveling for UMMC Ekaterinburg.

Griner has since pled guilty, while American president Joe Biden has unsuccessfully lobbied for her release. She has been sentenced to serve nine years in prison. Griner’s wife Cherelle has said, “She’s not doing well. She’s losing it.”

Griner’s plight was of no concern to 6ix9ine.

“You know we [are] out here,” the rapper said in an Instagram video. “Sh-t is crazy.” 6ix9ine then whispered into the camera, “F–k Brittney Griner.”

6ix9ine did not back down from the sentiment when he sobered up, either.

“I’m not gonna lie, I was drunk … but I stand on that,” 6ix9ine wrote. “I’m in Russia while y’all scared to come here… argue with yourself. [Shaking my head], I’m like that,” he wrote on Sunday. “Just remember I’m still alive while your favorite rapper is dead. [I would] be mad, too.”

Russia, for its part, has refused to release Griner.