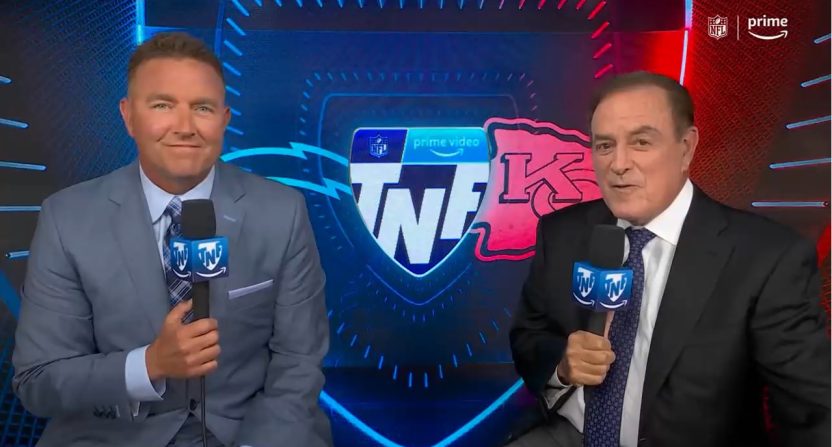 When the Buffalo Bills and Los Angeles Rams kicked off the 2022 NFL season, something was missing. While Cris Collinsworth was in NBC’s booth, the slide onto camera that he’d done with long-time partner Al Michaels was absent. Michaels is now with Kirk Herbstreit for the Amazon Prime Thursday Night Football broadcast. So, in his regular-season debut with Michaels, would Herbstreit bring back the slide?

As the broadcast for Thursday’s game between the Los Angeles Chargers and Kansas City Chiefs started, the camera was focused solely on Michaels. The setup was perfect. Just as Collinsworth had done in the past, Herbstreit would slide in on either side of Michaels.

But it never happened.

The lack of a Collinsworth slide stings here… #TNFonPrime pic.twitter.com/dR4ZPYYiY1

Some people were surprised, as the camera shot made it seem as though a Herbstreit slide was inevitable.

I really thought Herbstreit was about to do the slide

Was I the only one waiting for Herbstreit to slide in next to Al?

The reaction to the lack of a slide was divided. For some, a slide-in from his broadcast partner seemed like a necessary part of an Al Michaels broadcast.

If I'm running @NFLonPrime, I would have had Kirk Herbstreit slide in next to Al Michaels during his pre-game table-setter for 'Thursday Night Football.'

Social media would have loved it. Would have been a great inside joke for fans who looked forward to 'Collinsworth slide.'

Others, though, were more relieved. The feeling among them was that the slide is meant for the Collinsworth and Michaels team. Once that tandem ceases to exist, the slide should go the way of the dodo.

No slide. Coast is clear.

When I saw Al Michaels give his pregame speech alone to the camera, I almost had a heart attack at the thought of Kirk Herbstreit doing the Collinsworth slide in. We almost had stolen valor live on our televisions.

Perhaps there’s a solution to be found in the middle. While his current concerts feature a lot of Beatles songs, Paul McCartney wasn’t making a habit out of singing those at concerts while performing with Wings. It just wouldn’t have made any sense. Perhaps, though, the slide can be done on special occasions. Maybe the shouldn’t be a weekly thing anymore, but it doesn’t need to completely vanish, either.