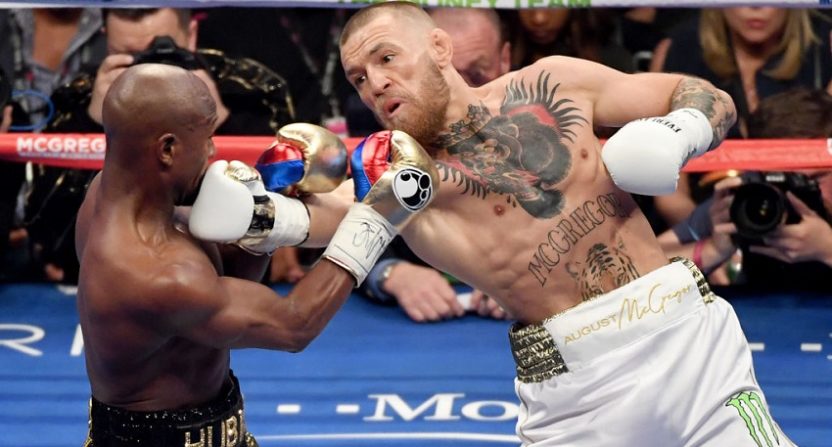 Conor McGregor would be crazy to return to the UFC.

Yes, McGregor’s career as a professional boxer now stands at 0-1, but even in defeat against Floyd Mayweather he did what very, very, very few people thought he could do: make it a competitive fight.

There were maybe a lot of people rooting for McGregor or placing bets on him in hopes of winning a long odds jackpot, but you’d be hard-pressed for anyone actually using their head to think that he had any hope of defeating the most accomplished boxer of this generation in his first professional fight.

In fact, I thought McGregor would have put in a great performance if he could have got out of the second round. Anything better than CM Punk’s much-hyped UFC debut would have been a moral victory for the Irishman in addition to his insane payday. (More on that in a minute.)

Instead of going down early, though, McGregor did the exact opposite. He actually won the first couple rounds and looked like he belonged against the world’s best. Predictably, McGregor tired as the later rounds wore on and Mayweather’s brilliant defense turned to rapid fire offense. McGregor was out on his feet during the devastating ninth round before the fight was finally stopped in the 10th. Although the Irishman may have objected to what he deemed an early stoppage, it was clear that his hands were down and he was unable to defend himself for much longer.

Mayweather was always expected to win the fight, the real question was about McGregor and his performance. The fact that he didn’t get knocked down and made it through 10 rounds is an incredible athletic accomplishment. Maybe the most astounding fact is that McGregor actually landed more punches against Mayweather than Manny Pacquaio did and Pacquiao is regarded as maybe the second-best pound-for-pound fighter of the 2000s behind Mayweather.

In case you think that number is a fluke, McGregor also landed more punches than the likes of Shane Mosley, Miguel Cotto, Andre Berto, and Juan Manuel Marquez. Yes, it was Mayweather’s first stoppage since 2011, but McGregor showed some impressive offensive spurts and an ability to take a punch once he was obviously fatigued.

Even though Mayweather is openly saying he’ll go back into retirement at 50-0, there are already rumblings about a potential rematch. And why not? Unlike most megafights in boxing in the past 30 years, this fight actually surpassed the hype instead of failing to live up to it or ending in disgrace. When was the last time the sport of boxing could actually say a super-fight delivered on its promise and potential to fans? Given how well McGregor performed, there would still be millions on the table if he and Mayweather ever entered the ring together again. Don’t ever count it out as a possibility, not as long as Mayweather has a couple hundred million more reasons to do so.

But let’s just entertain the thought that McGregor never gets another shot at Mayweather. What’s next for him? Where does he turn to from here?

There is simply nobody in boxing who can now generate the kind of interest in a fight that Conor McGregor can. Combine his performance against Mayweather with his showmanship (that sometimes crosses over into the incendiary) and you have a bonafide superstar on your hands. At the very least, boxing now has someone that can crossover into the mainstream as a recognizable, real life celebrity for the first time in years. Canelo, GGG, Andre Ward, and Anthony Joshua are all great fighters, but none of them are selling a fight like McGregor can.

Ask your average, everyday sports fan who those guys are and they might think they’re baseball or hockey players. On the other hand, everybody knows who Conor McGregor is now. Even friends and family members who think mixed martial arts is what the Teenage Mutant Ninja Turtles do have heard of Conor McGregor. And with the respect he gained on Saturday night, he has earned the right to move forward with a career as a boxer.

Not only is there more money for boxing in McGregor, there’s more money for McGregor in boxing. He’s going to make an estimated $100 million from the Mayweather fight. To put that number in perspective, he earned $15 million for his 2016 UFC bout with Nate Diaz.

Realistically speaking, if McGregor were to continue forward in boxing he could make multiples of what he would as a UFC fighter. Even if it wasn’t another big-ticket showdown, he could still earn way much more per fight than if he were to ever return to the octagon.

Everyone who witnessed that fight on Saturday night would love to see McGregor enter the ring again to see where his fledgling boxing career would go from here. It may not reach the same levels of interest as the Mayweather fight, but now that we all believe McGregor can make it as a legitimate professional boxer, his road forward is something that is incredibly enticing to follow.

Wouldn’t you want to follow that journey to see if McGregor can become the first man to win championships in the UFC and boxing? Imagine if McGregor goes back down the contender’s list and starts his way up the ladder, racking up victories and building up his stamina. (And polishing up his style that might be best described as “a bit rough around the edges.”) Or who knows, McGregor could take another big money payday against a top fighter and make enough money to call it a career, win or lose.

Either way, there’s definitely a future for McGregor in boxing, and it’d be a path forward that would be hugely beneficial to both.