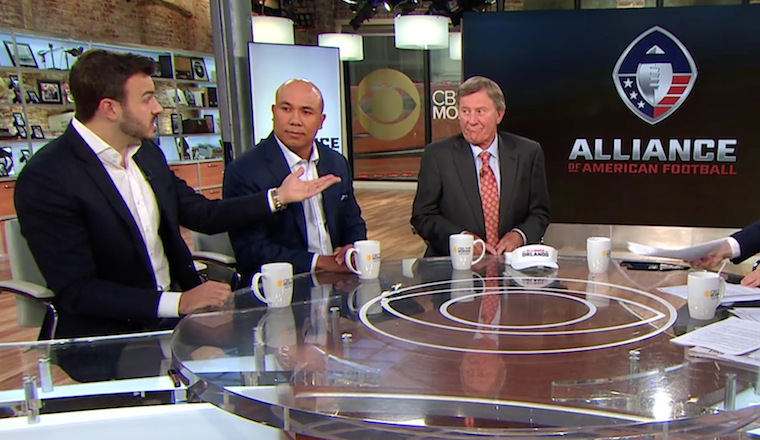 The Alliance of American Football has planted its first flag. On Saturday, the new football league’s co-founder and CEO Charlie Ebersol appeared on CBS This Morning with former Pittsburgh Steelers star Hines Ward to kick off the AAF’s rollout. Ward will serve as the league’s executive of player relations.

The league will make its debut on Feb. 9 next year, one week after the Super Bowl. Eight teams will play a 10-game season during the AAF’s inaugural campaign and Orlando was announced as the first city which will have a franchise. Furthermore, the Orlando AAF team will be coached by former University of Florida head coach (and Heisman Trophy winner) Steve Spurrier.

If the Alliance of American Football wanted a big name attached to its rollout, Spurrier certainly qualifies. The Head Ball Coach, as he referred to himself in Gainesville, led the Gators for 12 seasons, during which he compiled a 122-27 record with seven SEC titles and a national championship in 1996.

Spurrier, 72, also has experience as an NFL head coach, though he was less successful with the Washington Redskins, notching a 12-20 record in two seasons. And the Ole Ball Coach is familiar with start-up pro football leagues, coaching the USFL’s Tampa Bay Bandits for three seasons (with a 35-21 record).

The AAF intends to keep a relatively brisk pace compared to the NFL, aiming for two-and-a-half-hour games, a 30-second play clock, no kickoffs, no extra-point kicks, and fewer TV timeouts. On CBS, Spurrier cited the new rules as something that compelled his return to coaching after three years, in addition to a new challenge.

Ebersol explained to CBS’ Anthony Mason and Dana Jacobson how an onside kick will work with no kickoffs: A team looking to get the ball back will have it at the 35-yard line with a fourth-and-10. If it converts, they get to keep the ball. If not, the other team has the ball in prime field position. (Did Bill Polian and J.K. McKay come up with something better than any of the alternative ideas Matt Yoder proposed for the NFL?)

As previously reported, CBS will be a TV partner for the league, televising its debut game and championship contest on the network, while broadcasting one game a week on CBS Sports Network. Additionally, fans will be able to watch games on the AAF’s free streaming app.

According to Ebersol, the other seven teams to play in the AAF (along with their coaches) will be announced in the coming week. (The Comeback’s Sean Keeley is one-for-one in his predictions for which cities will get AAF teams!)