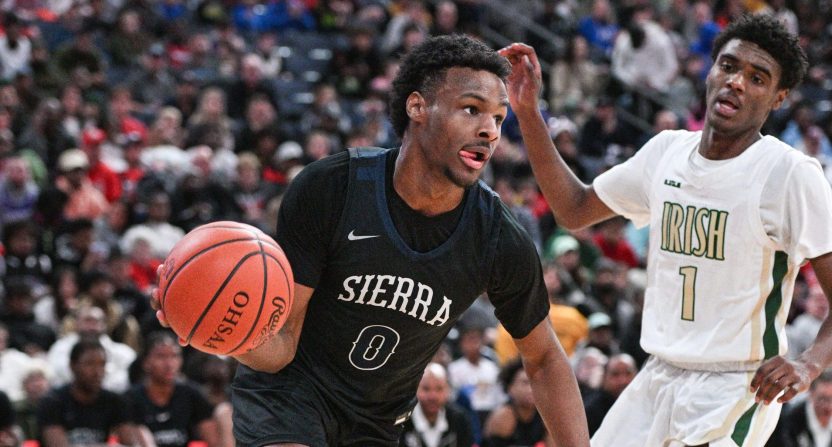 There’s been a ton of speculation over where Bronny James, son of Los Angeles Lakers superstar LeBron James, will play college basketball. Now, it sounds like we know that he’s down to three choices.

“According to a person with knowledge of the situation not authorized to speak publicly, James will make a decision on his college commitment after the season, and his top three schools are Ohio State — his father’s favorite — USC and Oregon,” said Los Angeles Times reporter Luca Evans. “LeBron James, 38, recently doubled down on previous remarks that he wants to finish his NBA career playing with his son.”

Reports are going around that Bronny James has named three finalists for college. This is not quite true. He has three top schools: Ohio State, USC, and Oregon, per source. Official finalists have not been named. A dark horse is still possible. https://t.co/ju6hFjJt4m

It was long assumed that Bronny would end up matriculating at Ohio State given his dad’s appreciation for the school and wish that he might have played for the Buckeyes had he gone to college. However, LeBron’s Los Angeles presence has shifted Bronny’s focus to the West Coast and LA. The potential for James to land in Columbus cooled recently, though it sounds like it’s still possible.

The family’s Nike relationship certainly gives credence to the Oregon possibility. The younger James has already signed a NIL deal with Nike.

Wherever he ends up, it sure sounds like the plan is for him to go pro sooner than later. There’s only so long that the 38-year-old LeBron can keep lacing them up, and if he wants to play alongside his son in the NBA, that’s still at least a few years away from the sound of it.