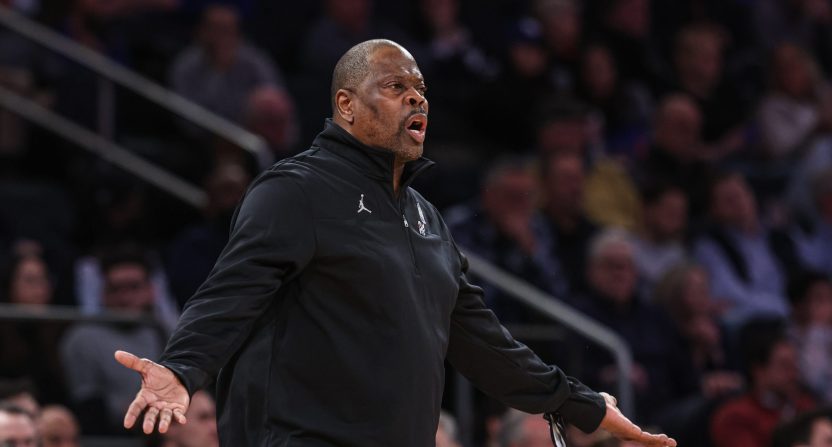 Coming off a 6-25 season that included an 0-19 Big East conference record and a 21-game losing streak, Ewing’s squad has sputtered to a 3-3 start and has now lost at home to American University for the first time since 1982. Not only is that a loss to a 13.5-point underdog (whom they led by 16 at one point) but it’s also the program’s first loss to a sub-300 KenPom opponent ever.

Georgetown falls to American at home as a 13.5-point favorite after leading by 16 points.

It’s the Hoyas’ first loss to a sub-300 KenPom opponent ever (2002-present). pic.twitter.com/hYkVnOJJYw

After a two-win start to the season, the Hoyas have now lost three of their last four to schools that a program like Georgetown has no business losing to (Northwestern, LMU, and American).

As bad as things got last season for Ewing and the Hoyas, the school decided to keep the legendary player as head coach under the assumption that he could get back on track. However, multiple players transferred during the offseason, signaling that this would not be the rebound year that everyone was hopeful for. And so far, it has not, leading many around the college basketball world to wonder when the school will cut Ewing loose and start over because it certainly needs to happen sooner or later.

The epitome of brutality.

Hoyas have now lost 3 of last 4 to Northwestern, LMU and now American.

The Patrick Ewing Coaching Era has been nothing short of a complete disaster.

American just beat Georgetown for the first time since 1982.

Program builder for the Mighty AU Eagles. For Georgetown, it’s time to change something.

Georgetown being this horrible right now is more of an indictment on Patrick Ewing as a coach than last year's debacle. In 2021-22, Hoyas did not have high-major talent. This team does! But they have gotten destroyed in four straight second halves and seemingly have no direction.

Georgetown couldn't take down the American Eagles. Maybe Aeropostale would be a better matchup for them.

Well this tweet made me to look at the Georgetown score and…yeah, it’s time. Failed experiment. https://t.co/5TorRxxFL0