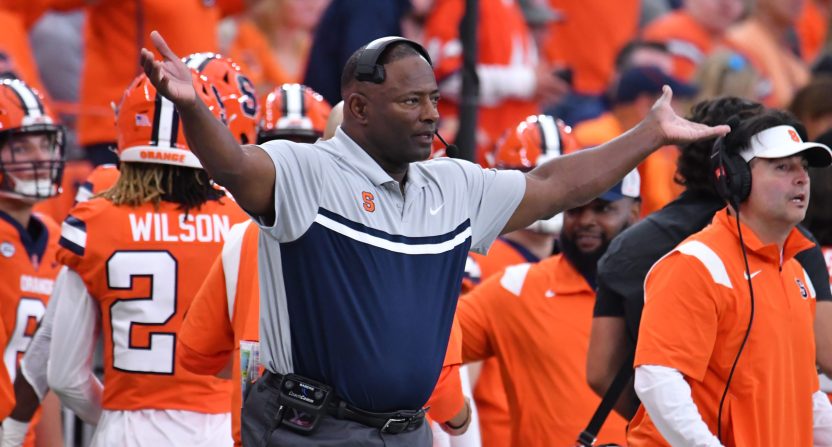 It’s still early in the 2022 season, but a few college football coaches have stood out. Here’s a look at five of them:

This was a tough call, and we considered Duke’s Mike Elko for this spot. While both he and Jake Dickert are 3-0, Washington State has a more impressive résumé with a 17-14 victory at then-No. 19 Wisconsin. Dickert’s rise came about unusually. He was promoted from defensive coordinator to interim coach mid-season of 2021 after Nick Rolovich was fired for his refusal to comply with the school’s COVID-19 vaccination policy. After Dickert went 3-3, including crushing archrival Washington 40-13, he was named to the permanent position.

The Cougars were picked to finish seventh in the Pac-12. That might be too low. They will play their conference opener Saturday when they host No. 15 Oregon (2-1). Washington State’s defense hasn’t given up more than 17 points in a game.

Appalachian State is the most exciting team in the nation right now. Every game has been decided by four points or less. The Mountaineers produced the play of the year with a game-winning Hail Mary to stun Troy 32-28. That amazing finish wasn’t even their biggest victory of the season. The previous week, Appalachian State shocked then-No. 6 Texas A&M 17-14. With a little luck, Shawn Clark’s cardiac kids could be unbeaten. They scored 40 (!) fourth-quarter points in their season-opener against North Carolina, but fell 63-61.

Clark was already on the national radar as a possible Power 5 candidate. He’s 22-8 in his career since taking over Appalachian State when Eliah Drinkwitz left for Missouri. The Mountaineers are favored to win the East Division of the Sun Belt.

Is Syracuse good? That’s a hard question to answer. Considering that Dino Babers entered this season on the hot seat, he’ll take whatever victories he can get. The Orange opened up with dominant performances against Louisville (1-2) and Connecticut (1-3). Louisville has only beaten UCF, and UConn hasn’t beaten an FBS school. Then last weekend, Syracuse stunned mistake-prone Purdue (1-2).

Syracuse has been 3-0 as recently as 2018 when it won its first four on way to a 10-3 record. That was Babers best season in his seven years at the program. Since then, the Orange hasn’t even finished with a winning record. But they have an excellent chance to improve to 5-0 with home games against Virginia and Wagner. The true test will come on Oct. 15 against visiting No. 12 N.C. State.

Kansas has traditionally been one of the worst Power 5 jobs in the country. Les Miles, who won a national championship at LSU, went 3-18 before being forced out due to sexual misconduct allegations when he was in Baton Rouge. Lance Leipold was hired from Buffalo in 2021 to clean up the mess and build some credibility. After going 2-10 last year, the Jayhawks have been one of the biggest surprises in the nation.

The Jayhawks, picked to finish last in the Big 12, have already won as many conference games as they did last year when they went 1-8 in league play. Kansas is off to its best start since 2009 after upsetting Houston in Texas. The Jayhawks are fifth in the nation in scoring (51 points per game), after ranking No. 105 (21.1) last year.

Kansas faces another surprising team Saturday when it takes on visiting Duke.

Not too long ago, Mike Norvell seemed like a dead man coaching. Last year, Florida State started 0-4, including that infamous loss to Jacksonville State. Norvell also lost high school cornerback Travis Hunter, the No. 1 recruit in the country, to Jackson State coach and Florida State alum Deion Sanders. But the Seminoles, perhaps motivated to avoid paying another hefty buyout, decided to stay the course. Patience has paid off. Florida State is 3-0 for the first time since 2015 when it won its first six games.

Florida State’s signature victory was that wild finish against LSU in New Orleans. Last week, the Seminoles overcame an injury to quarterback Jordan Travis to rally at Louisville.

The Seminoles have a great chance to keep rolling with Saturday’s home game against Boston College (1-2).

Various teachers have compared the Irish dancing industry as akin to the mafia.

Various teachers have compared the Irish dancing industry as akin to the mafia.