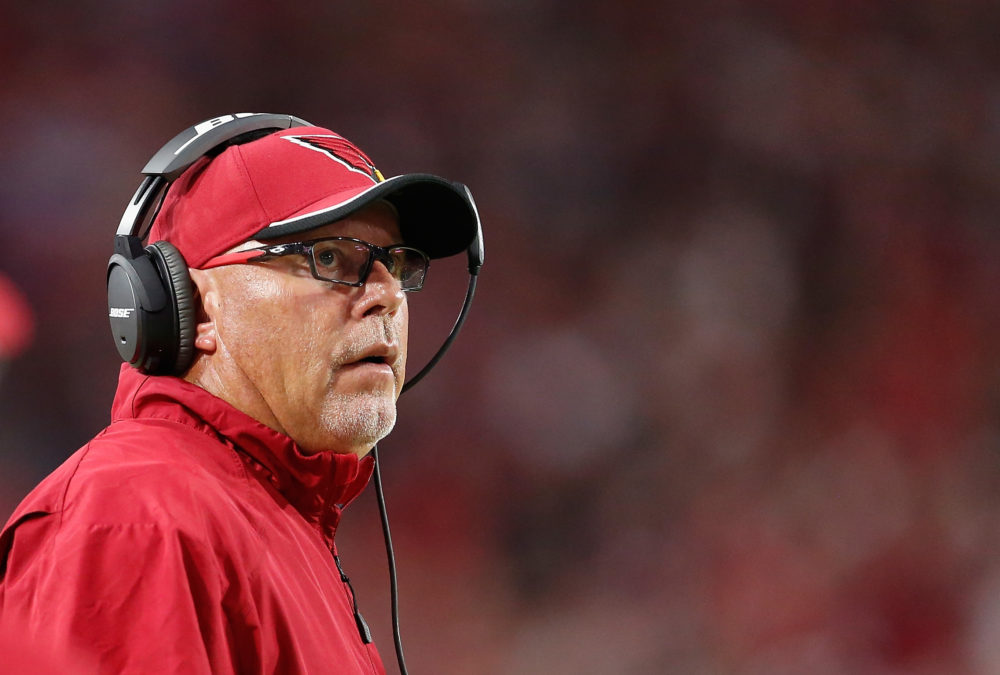 Arizona Cardinals’ head coach Bruce Arians is not happy about reports that he’s leaving the team after the season.

Those have been flying around for months, with the latest coming from Pro Football Weekly executive editor Hub Arkush Tuesday. Arkush wrote that multiple sources told him Arians “will agree to part ways with the Cardinals next week” and that “it will be an amicable split and that Arians is not being fired.” Arians had quite the response, as relayed by ESPN’s Josh Weinfuss:

Bruce Arians’ response to a report this morning that he and the Cardinals will part ways after the season: “If you want to ask me about this fake news story that has come up – I’m quoting the president now – nothing’s changed,” Arians said. “I don’t know where all that sh–’s came from. Nothing’s changed in the last month, and everybody keeps asking the same question.”

Arians’ usage of “fake news” there is going to draw some attention, and it’s also interesting that he’s taking this report on in such strong terms. The report seems to make some sense, especially considering that Arians is 65 and has battled multiple health scares (including prostate cancer), that the Cardinals have posted a disappointing 7-8 mark so far this year, and that they’re relying on countless aging veterans like Larry Fitzgerald and Carson Palmer. And it’s maybe also notable that Arians isn’t saying he won’t retire, just that he hasn’t decided on that yet:

Arians said he “never” thinks about whether he’ll retire, which is why he’s tired of being asked about it.

…”There’ll come a time and place when we decide what we’re going to do,” Arians, 65, said.

…”We’ll come back on the plane [Sunday night] and get everything finalized through the season, get all the reports like we always do, get all our end-of-the-season business done,” he said.

“[Then I’ll] sit down with my wife, son and daughter and we’ll talk about it and see what we want to do. Make a decision sometime between Monday and February.”

So, it’s far from certain that Arians will in fact be returning to the Cardinals, despite his denial of the claim he’s already planning to leave. And earlier this month, CBS’ Jason La Canfora reported that the Arizona front office is already making preparations in case Arians exits:

The Arizona Cardinals front office is preparing in case head coach Bruce Arians opts to retire at the end of the season, league sources said, something many of his peers believed was imminent at this time last year. Arians has not told the team he is retiring, but given his battles with cancer and his health scares in recent years, the team has discussed some contingencies in the event a coaching search is required.

Many close to Arians do not believe he will be back on the sidelines for 2018; he has denied the notion in the past and given no outward indication he is considering that now, but it’s something team officials have discussed.

We’ll see where this goes, and if the reports of Arians’ exit actually prove to be “fake news” or not. But he certainly doesn’t seem thrilled with the way people are writing about him leaving.

1 thought on “Bruce Arians calls report of him leaving Cardinals “fake news story,” says “I don’t know where all that sh– came from””