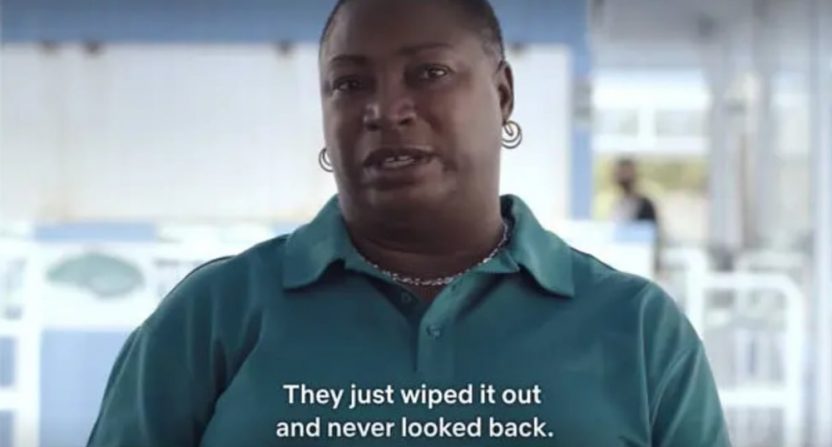 When the Fyre Festival imploded in real time across social media feeds worldwide, a whole lot of people took a great deal of pleasure in watching everything figuratively burn. Between the shady promoter and hip-hop mogul behind it and the many “influencers” who seemingly got duped to show up in the first place, it seemed like it was okay to mock and laugh because there were no “good people” involved.

What I appreciate about @netflix’s #FyreFestival doc is how it goes into detail about how it affected the locals and the damage it did to their businesses. If I’m lucky enough to travel to Exuma this sweet woman is getting ALL my coins. #FYRE pic.twitter.com/YWux60tA2g

After Hulu and Netflix released their dueling documentaries last weekend about the failure of the festival, most of us were introduced to some of the actual people who were harmed by the grift. We found out that hundreds of Bahamian workers toiled for days on end to make the festival work, only to get shafted when no one paid them. And then there was Maryann Rolle, the woman who became a de facto caterer for the festival. She hired staff and put thousands of dollars into supplies. And in the end, she got completely stiffed to the tune of $140,000. As she mentioned in the Netflix doc, she was forced to dig into her own savings for $50,000 to pay those she owed. As she put it, everyone involved in the festival got to go home, but she was left there to deal with the mess they created.

Thankfully, the documentary created a great opportunity for Rolle to take her message to the masses. So she created a GoFundMe page to ask for help.

Back in April 2017 I pushed myself to the limit catering no less than a 1000 meals per day. Breakfast, lunch and dinner were all prepared and delivered by Exuma Point to Coco Plum Beach and Roker’s Point where the main events were scheduled to take place. Organizers would also visit my Exuma Point location to enjoy the prepared meals.

Fyre Fest organizers were also checked into all the rooms at Exuma Point Resort.

As I make this plea it’s hard to believe and embarrassing to admit that I was not paid…I was left in a big hole! My life was changed forever, and my credit was ruined by Fyre Fest.

My only resource today is to appeal for help.

People who watched Fyre on Netflix and wondered what they could do had their answer. In fact, Rolle has now raised almost $150,000, which has surpassed her goal of $123,000 and should be able to get her back to where she was before the disaster of a music festival ruined things.

Billy McFarland obviously didn’t donate because he’s currently serving six years in jail. As for the other person behind the festival, Ja Rule, he’s spent much of the week tweeting through it, absolving himself of blame and pushing the idea that he was a victim as well (which does not jibe with how he acts before and after the festival). Mr. Rule did take to Instagram to leave a message for Maryann.

“My heart goes out to this lovely lady… MaryAnne Rolle we’ve never met but I’m devastated that something that was meant to be amazing, turn out to be such a disaster and hurt so many ppl… SORRY to anyone who has been negatively effected by the festival.”

The one thing he doesn’t mention is that he would be donating to help her. And as far as anyone can tell, he has not.