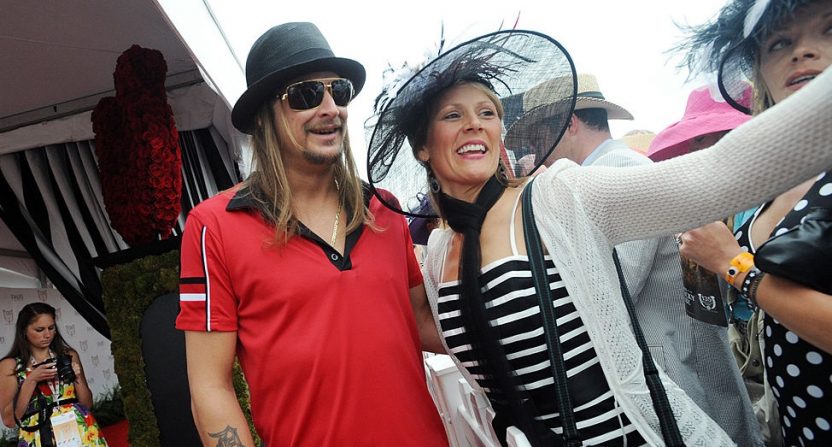 It’s Kentucky Derby week and Louisville is rolling out the red carpet. No town is as eager to embrace the famous. Send us your VIPs ASAP. Give us your pampered, your wealthy, your executive suite masses yearning to breathe free.

Let me tell you about the very rich. They are different from you and me. And that’s OK. In Louisville, you will see our “Celebrities are welcome here” signs on virtually every lawn.

New York City, Los Angeles, Miami and even Nashville: that’s where the stars reside, so occasionally spotting one isn’t a big surprise. “Wait a minute. Was that Taylor Swift shopping at Whole Foods?” Yes, it probably was.

In Louisville, the best you’re going to do is occasionally bump into University of Louisville basketball coach Rick Pitino in the produce aisle. On an extremely rare occasion, you might get lucky and see hometown girl and Oscar winner Jennifer Lawrence enjoying the nightlife. (Save your snide remarks. Our bars stay open until 4 a.m. and some until 6 a.m. Derby weekend.)

louisville is actually more beautiful in person. these pics don't do it justice. see you at the yum! @uofl @gocards pic.twitter.com/6TBW2qWf1n

Louisville is the biggest small town in America. We don’t have major professional sports, like nearby cities Indianapolis, Nashville and Cincinnati. It’s a quirky, fun place. It’s charming. But it’s not a place where you’ll see A-listers kicking it.

Unless it’s the Kentucky Derby.

For one weekend a year, the attention span of the world is focused here. Not many other places can say that. The Derby is the place to see and be seen. As a result, an armada of celebrities pours into town.

The rich and famous have been coming to the Derby for almost as long as the race itself. In 1877, Polish actress Helena Modjeska came to the third-ever running of the race. Ever since then, the hoopla has only gotten bigger. In 2007, Churchill Downs started a tradition of Red Carpet entrance for VIP attendees and their guests.

There are also several Derby Eve celebrity galas and the most famous is the Barnstable Brown Party. It’s a fundraiser, so many will pay top dollar to mingle with the elite. But sometimes, you’ll find celebrities away from the bright lights. On one Derby night at The Silver Dollar, John Cusack was trying his best to go incognito with a cap pulled over his head. But he left in a three-wheeled motorcycle, so how low-key was he trying to be?

The Silver Dollar, once a fire station, is a good place for a random celebrity encounter. One Derby evening, a group of NFL football players dined out. A tight end who shall remain nameless — no, it wasn’t Rob Gronkowski; good guess, though — tried to climb up a fire pole. He was unsuccessful.

Cusack was complimentary of Louisville and the football players had a good time and seemed to treat people well. Some celebs, not so much.

One must be careful and use common sense. Insulting the host city or its institutions is not the way to go. Take the case of actress Jenny Mollen. In May 2013, she came to the Derby with her more famous husband, actor Jason Biggs. The local paper, the Louisville Courier-Journal, posted pictures of the couple attending the Barnstable Brown Party. The caption identified the two as “Actor Jason Biggs of ‘American Pie’ fame and guest.”

Mollen didn’t take too kindly to being referred to as “guest” and got unreasonably angry.

When the C-J wrote a follow up story, she wasn’t happy about that either.

Perhaps Mollen was trying to be funny or maybe she has a greater sense of her own fame. Identifying everyone’s significant other in a celebrity gala isn’t an easy job – especially when on deadline. In either case, not a good look for her. Louisville is the South and manners are a big deal here.

Generally speaking, many celebrities are on their best behavior here. They are gracious and usually accommodating. If you’re a regular person in town for the Derby, what’s the key to a positive experience? Always have a good attitude when approaching celebrities and have reasonable expectations. They may not want to take a selfie or have much time to chat.

Here are some strategies for a few who are expected to be in town for Derby.

Aaron Rodgers – The Green Bay Packers star, and arguably the NFL’s greatest quarterback, is a regular Derby attendee. You might not have known, but there has been a change in Rodgers’ relationship status. For God’s sakes, don’t ask him about Olivia Munn. Rodgers has apparently moved on. And definitely don’t inquire about his parents. Rodgers can be extremely private, so don’t attempt to pry. Instead, your best bet might be to talk to Rodgers about music. He has his own record label and plays guitar. You might catch him off guard and spark his interest by just chatting about music.

Larry David – The Seinfeld co-creator and Curb Your Enthusiasm star is a comic genius. But most comedians don’t like it when you expect them to be immediately funny on cue all the time. Comics are not trained seals. And if David is anything like his Curb Your Enthusiasm character, he might be socially awkward and grumpy. Your best bet might be discussing baseball. In fact, a Curb Your Enthusiasm episode with a baseball scene once saved a man from being wrongly accused of murder.

Kid Rock – OK, admittedly it’s going to be difficult to resist the urge to ask him about the most famous and strangest photo of the Trump Administration thus far.

Ah, screw it. Go ahead and grill him about the White House. Also, see if you can find out if he’s actually interested in a political career.

These are just a few of the big names expected to be in town for the Derby. Look out for Tom Brady, Rob Gronkowski and a few more of the New England Patriots, Tracy Morgan, Kacey Musgraves and Jeff Bridges, too.

And of course, some celebrities just show up. Wouldn’t it be fun if one of Kentucky’s favorite sons popped in unannounced? George Clooney was born and raised in the Commonwealth. And guess what? Derby Day is his birthday. He turns 56 years old on Saturday.

If you spot Clooney, make sure you tell him about me.