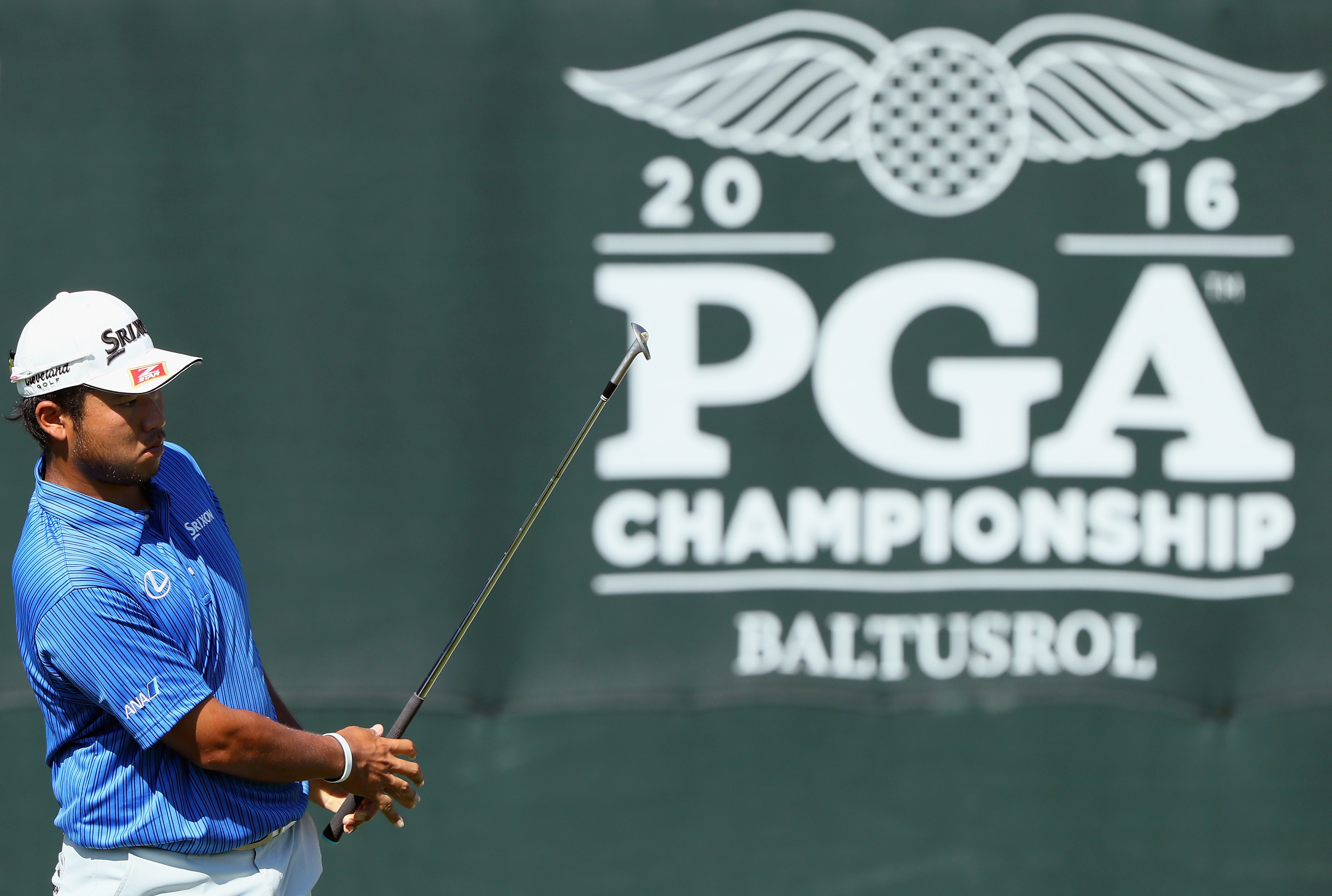 Wow, it feels like just a few weeks ago we were watching a thrilling duel on Sunday of the British Open. And, in fact, it was less than that! Just 10 days ago, we watched Henrik Stenson fire a closing 63 to hold off Phil Mickelson at Royal Troon.

The return of golf to the Olympics has compressed the golf calendar, meaning the PGA Championship, normally held in the middle of August, will instead be starting in July.

This year the tournament returns to the Lower Course at Baltusrol, the 121-year-old course in New Jersey that last hosted a PGA Championship in 2005. Baltusrol, along with having a name that’s very fun to say, has hosted seven U.S. Open tournaments, and was the site of Phil Mickelson’s second major victory at that 2005 PGA. The Lower Course is an A.W. Tillinghast design. Other courses he designed include Winged Foot and Bethpage Black in New York.

It’s a fairly straightforward course, with fast, challenging greens serving as the main defense. There’s a chance of storms on Friday and Sunday; in 2005, the finish was delayed until Monday due to weather.

Well, here’s the fun part. The PGA Championship, though normally fourth of the majors in terms of prestige, tends to have the deepest field. The Masters is a limited-field event, and the U.S. Open and British Open feature qualification procedures that allow for amateurs and others to make the event. Which is good and fun, in a lot of ways. But the PGA Championship sets up the qualification rules to essentially allow them to invite the top 100 players in the world. Slots are reserved for past champions, and PGA club pros as well, to fill in the other 56 slots. But these rules ensure the quality of competition and make it difficult to predict a winner.

Well, as I said, that’s difficult.

But this entire piece is ranking the field!

Sigh, fine. It’s a muddied process. The club pros aren’t going to win. A group of 20 who finished with the best scores in the PGA Professional National Championship, they can obviously play and some might make the cut. (There’s also the cool story of Wyatt Worthington II, the first African-American club pro to play in the PGA in 25 years.)

Then there’s the former champs and other entrants who haven’t played that well in a long time. Names like John Daly, Rich Beem, Shaun Micheel, and Y.E. Yang are on here. As is Rocco Mediate, the current Senior PGA champ. They’re not going to win either.

And then there’s a whole group of folks also likely to not contend. So it’s probably easiest to do it this way. Here are 30 players. About one-fifth the field. I’ll rank them from least likely to most likely, but my bet is that one of these players will be the winner. Not guaranteed!

The summer of Beef has been fun. He contended at the British Open, finishing eighth. And, of course, his nickname is Beef.

The man famed for wearing octopus-adorned pants had made 13 straight cuts until the British Open. But that’s a different style of golf entirely, and he’s made the cut at the past two PGAs.

Haas has made the cut at the past five PGA Championships, and finished T9 at the British.

I like Paul Casey. Always have. Finished T4 at the Masters, generally plays well on traditionally American courses.

My golf crush. He made the cut at both the U.S. Open and the British, and excels on courses like Baltusrol, straightforward with minimal bells and whistles.

Plus, he wore this hat combo at Troon: 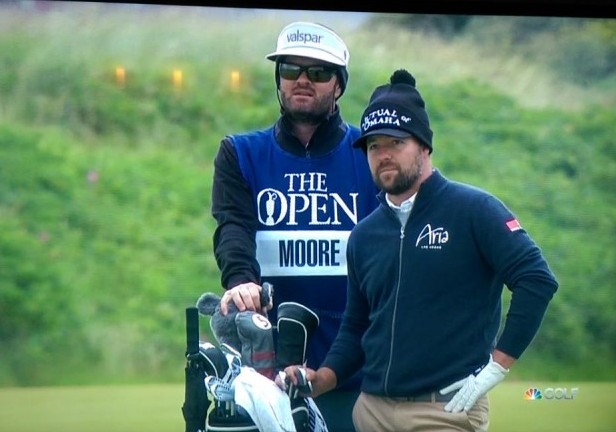 Piercy has hung around leaderboards for a long time, and at 37, is likely running out of chances. This is as good a time as any for him to break through. Can definitely go low.

The Englishman finished T12 at the British, and had two top-six finishes prior to that. A player on the rise, according to, well, this article.

A sentimental favorite after his comportment at the U.S. Open, Westwood is a solid ball-striker who played fairly well in 2005, the last time this championship was at Baltusrol.

A former PGA champion, Kaymer has had an underrated 2016. He’s made 11 straight cuts, including all three majors so far in 2016, and has obviously shown competence with the PGA setup.

He has the best swing when he’s on. It’s tough to guess when that will be.

Sergio has three straight T5 finishes, including both the U.S. and British Opens. He’s also never won a major. But I’m feeling magnanimous.

Like his fellow South African Oosthuizen, Schwartzel has a fantastic swing that only seems to work some of the time. May as well be now.

Hey, Patrick Reed! He’s due. Finished T12 at the British.

Sneds finished T5 last week, and played well at the British Open. He’s also an excellent putter (or at least he is when he’s playing well), and with greens being the main thing to conquer this week, he seems like a breakthrough pick.

He’s made seven straight cuts, including a T5 at the U.S. Open. Steady player. Could see him breaking through this week.

He’s very talented. (Which, I mean, come on. Obviously.) But he’s exactly the type of player who can jump onto a leaderboard on the weekend and make things happen.

The Masters champ hasn’t done a whole lot since winning the Masters. But then he hasn’t played that much either, competing in only seven tournaments since. That said, a traditional layout should suit him fairly well.

Fowler had a weird stretch in the summer where he missed three straight cuts at three big tournaments: the Players, the Memorial, and the U.S. Open. He’s rebounded since with three made cuts, and always played fairly well at the PGA, including a T3 in 2014.

Bubba is Bubba, at this point. He’s older than you might realize at 37, and he’s also super-consistent. He hasn’t missed a cut in a year, since the 2015 British Open. That’s 23 straight cuts made. He plays such a wildly variable game, doing things with the ball that few others can do, that it’s easy to think of him as inconsistent. I honestly didn’t know about that streak of cuts made until I researched it. There’s a reason he’s ranked sixth in the world.

He’s very handsome. And very good. He hasn’t missed a cut himself since last fall, and also he’s handsome.

He’s been fighting his own game for most of the year, though that’s by his own standard. He’s still got a win and a T3, with two made cuts at majors since the Masters. He’s always capable of finding his stroke, and his game is just so well-rounded.

I love Zach Johnson this week. Finished T12 at the British, and T17 back in 2005 at Baltusrol. Has the sort of no-frills approach that should work well.

Jason Day is super-talented, and always seemingly overcoming obstacles. I’m not sure how it’s possible for one player to be so, so unlucky, but he certainly always makes it known to us.

Not saying he’s a bit dramatic, but, well, yes, that’s what I’m saying. Having said all of that, he’s still well-suited to win another PGA.

He played some of the best major-championship golf we’ve ever seen less than two weeks ago. He’s also generally consistent, and if he can bring that game across the Atlantic, he’ll be in good shape.

He finished T5 at the British. Third at the French Open. He’s won two PGA Championships already, has two other third-place finishes. Stupid long. Has more potential to run away with a tournament than anyone else on the list.

He’s so, so good. Obviously won the U.S. Open. After that, he won the WGC-Bridgestone, then finished T9 at the British and T2 last weekend at the RBC-Canadian Open. He’s on fire. And since I’ve favored bombers, it’s tough to argue against the guy who hits it longer than just about anyone.

And the final pick is…

This might be a sentimental pick, in some ways. Phil lost a fantastic duel to Stenson at the British, after shooting an opening-round 63. He played nearly flawless golf. He also knows that he’s running out of chances to win majors. In 2013, after yet another narrow miss in the U.S. Open, he recovered and won the British. If he brings the game he had at Troon to Baltusrol, the course at which he won his first PGA Championship in 2005, he’ll have a better chance than anyone.

Of course, it’s Phil. So who knows?