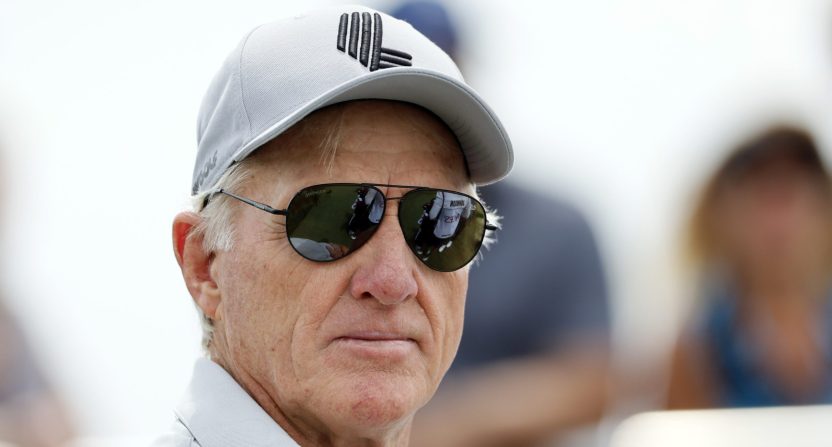 Greg Norman is a two-time winner of The Open Championship, otherwise known as the British Open. However, when the golf tournament begins later this week, The Shark will not be allowed to play at St. Andrews in Scotland and he can likely thank his association with LIV Golf for that.

Norman sought a special dispensation to play in the Open. Not only did the R&A, which organizes the Open, say no to LIV Golf’s CEO playing in the tournament, they even banished him from the traditional dinnertime gathering of past Open champions.

“The 150th Open is an extremely important milestone for golf and we want to ensure that the focus remains on celebrating the championship and its heritage,” the R&A said in a statement. “Unfortunately, we do not believe that would be the case if Greg were to attend. We hope that when circumstances allow Greg will be able to attend again in future.”

The Saudi-backed LIV Golf did not respond to a request to comment on the snub. However, Norman did tell Australian Golf Digest that he was “disappointed” and thought the decision was “petty.”

“I would have thought the R&A would have stayed above it all given their position in world golf,” said Norman.

Those associated with LIV Golf have missed quite a few golf events this year, either because they were disallowed or because of the negative attention surrounding their move to the upstart. The Department of Justice is currently looking into the PGA Tour and whether or not they’re violating antitrust rules by not allowing LIV Golf players to compete in some events. However, that’s unrelated to the Open Championship, which makes its own rules.

While some feel that Norman deserves the opportunity to at least attend the champions dinner, if not play, others have noted that he’s likely to use the opportunity to promote LIV Golf, which could make R&A complicit by default. Given some of his previous comments, it’s understandable that you might not want to be associated with them.

The situation that LIV Golf is creating in the golf world continues to create dramatic turns like these and there are plenty of strong reactions about it on social media.

It is to the Royal & Ancient's credit that it is willing to stiff-arm Greg Norman, a man who aims to cheapen the entire sport of golf just to enrich himself at the teat of a tyrant.@eamonlynch has the story. https://t.co/QM97uFVGy0

Even if he didn’t start the rebel league, they prob didn’t want him there anyway 🤣

Yet another massively biased opinion.

Greg Norman should have been invited as a two time past champion. LIV will not override any of the 150th celebrations. https://t.co/sjE17Gcq1X

The last thing you want to do is make a martyr of Greg Norman. #LIVgolf #TheOpen #Golf https://t.co/wXTl81uXrE

Just curious how many of the Champions dinners the shark has attended over the past 10 years. My guess is very few, so why is this year so important? https://t.co/QNJZ3droxf

It hadn’t occurred to me until now that Greg Norman’s request to play at St Andrews was nothing more and nothing less than an opportunity for him to promote LIV Golf.