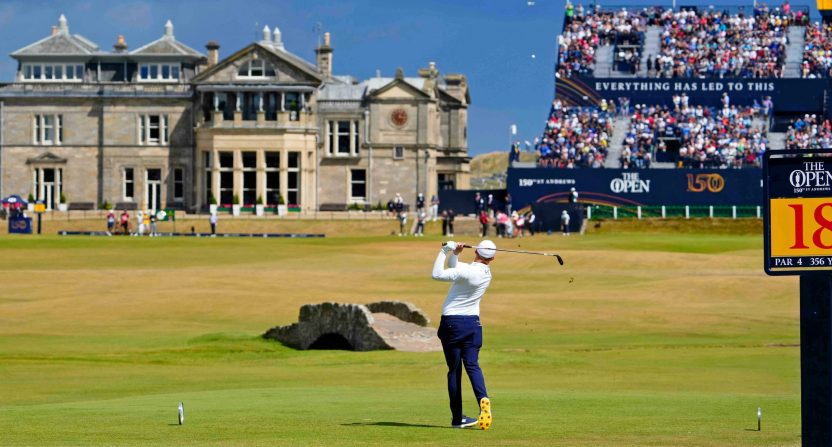 The Old Course at St. Andrews is the home of golf and where the modern game was first played. If it’s not the most iconic golf course in the world, it’s on a short list of them. But reigning U.S. Open Champion Matt Fitzpatrick isn’t a big fan.

Fitzpatrick is playing well at the 150th British Open. When he finished his third round, he was in a tie for seventh. His position dropped some after his round concluded but not much. By the time the third round at St. Andrews was complete, Fitzpatrick was tied for ninth. Despite that, when his round was over, Fitzpatrick made it known that he wasn’t particularly fond of the Old Course’s layout this week and generally speaking, doesn’t feel that the historic venue holds up well in the modern game.

Despite being T-7, Matt Fitzpatrick is not a huge fan of the Old Course or the setup. Says he feels a bunch of the pins are tricked up to protect the place, and that plenty of good shots are not being rewarded.

Asked if it holds up to the modern game, he paused…"Not really."

This take inspired some debate.

This is not it. https://t.co/PFay0bRGtg

Not surprising that a Northwestern dropout doesn’t enjoy using his brain. https://t.co/XwTz0lJbqx

Maybe good shots are good enough for t-7, and great shots are required for the win. https://t.co/VoxTiztq6B

Several other fans, though, felt that Fitzpatrick was speaking the truth.

He's not wrong. The game has far, far outpaced the course and there's a tremendous amount of luck involved, which is unfortunate because a Major Championship shouldn't be decided by that.

It will be unpopular, but he's not wrong. https://t.co/IA7XcT6O0g

It’s also worth noting that Fitzpatrick is not the only golfer in the field who feels this way. Luke Donald noted that many of the golfers were frustrated with the pin locations but noted it was the course’s only real defense.

Some of the guys shaking their heads at some of these pin positions, but when the wind isn’t up, it’s really the only way to stop the seriously low scores at the Old Course.

Viktor Hovland and Shane Lowry have both holed out eagle shots with near perfect lies from the fescue. Rory McIlroy, meanwhile, holed out for an eagle from one of St. Andrews’ notorious bunkers. These are lies that should be penalizing but weren’t. And these shots weren’t miraculous shots that hit the flag but would have gone 60 feet by if they hadn’t. These were all fantastic shots that would have finished in tap-in range had they missed the hole.

Additionally, those great shots weren’t isolated. The low scores for the week tell us that good shots are being rewarded more than they ever have.

When Nick Faldo was at 199 through 54 holes in 1990, he had a five-shot lead going into the final round. Tiger Woods, meanwhile, had a six-shot lead after shooting 200 over the first three days in 2000. For all intents and purposes, those tournaments were over heading into Sunday.

This tournament is nowhere close to being over. McIlroy and Hovland have to deal with each other, but Cameron Smith and Cameron Young are only four back, Si Woo Kim and Scottie Scheffler are five back and Dustin Johnson is six off of the pace. The scores are low. There’s a reason that seven-under is only good enough for a tie for ninth. That doesn’t happen if good shots aren’t being rewarded.

So, where is Fitzpatrick right?

With fairly benign weather and rough that isn’t too penalizing, there’s not too much keeping the world’s best players from going obscenely low.

Obviously, the R&A can’t control weather. And when the course is dry, the rough is going to be shorter and easier to move clubs through. If bad weather is needed to prevent the best players in the world from turning it into a birdie fest, the course probably can’t keep up with the modern game. The course was designed centuries before 300-yard drives were even possible, let alone commonplace.

So, from that perspective, Fitzpatrick is right.

This doesn’t mean that St. Andrews should be taken out of the rota. It does mean that low scores should be expected when the Open heads to the Old Course. If that means tougher flags, so be it.