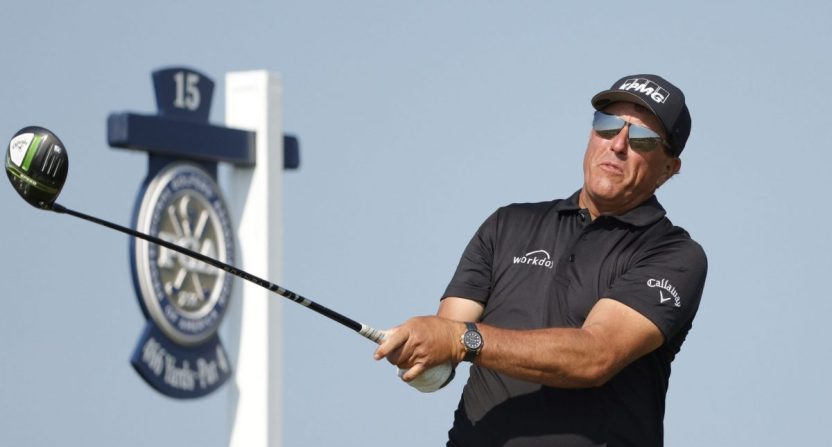 Phil Mickelson has been a topic in the golf world in recent months for all of the wrong reasons.

This is mostly due to his disturbing comments regarding human rights violations in Saudi Arabia while also publicly blasting the PGA Tour in favor of the new Saudi-backed LIV golf league. Mickelson is getting ready to make a return to the PGA Tour in the coming months after missing his first Masters since 1994 this past April.

Things have calmed down surrounding Mickelson and the criticism that he has received, but a shocking report has emerged on Thursday that Mickelson almost certainly isn’t too happy about getting out.

According to longtime golf writer Alan Shipnuck, Mickelson lost over $40 million due to gambling between 2010 and 2014.

The figure emerged from a forensic government audit into Mickelson’s finances during an insider trading investigation into professional gambler Billy Walters, whom Mickelson was initially linked to in the case.

“According to a source with direct access to the documents, Mickelson had gambling losses totaling more than $40 million in the four-year period (2010–14) that was scrutinized,” wrote Shipnuck. “In those prime earning years, his income was estimated to be just north of $40 million a year.

“That’s an obscene amount of money, but once he paid his taxes (including the California tariffs he publicly railed against), he was left with, what, low-20s? Then he had to cover his plane and mansions, plus his agent, caddie, pilots, chef, personal trainer, swing coaches, and sundry others.

“Throw in all the other expenses of a big life—like an actual T. Rex skull for a birthday present—and that leaves, what, $10 million? Per the government audit, that’s roughly how much Mickelson averaged in annual gambling losses. (And we don’t know what we don’t know.) In other words, it’s quite possible he was barely breaking even, or maybe even in the red. And Mickelson’s income dropped considerably during his winless years from 2014 to ’17.”

That is a ridiculous amount of money for anyone, even someone with the income of Phil Mickelson, to be losing from gambling.

Many around the golf world took to social media to share their shock at these staggering numbers that Mickelson reportedly gambled and lost.

don’t see any potential issues for phil mickelson here. im sure a man who runs up significant gambling debts will be just fine hopping into bed with the saudis https://t.co/3tk6JDrL94 pic.twitter.com/Ggg2k0rEWk

The narrative on Phil Mickelson was that he had to join the Saudis because he needed money to cover all his gambling losses.

There were never any specifics given.

Phil Mickelson trying to pay off that $40 million… pic.twitter.com/Rb3HZY6O9h

If Mickelson was attempting to lay low and let things cool down before he returned to the golf course, this news will definitely only add to the narrative that Mickelson was considering the LIV golf league for the huge financial payout.