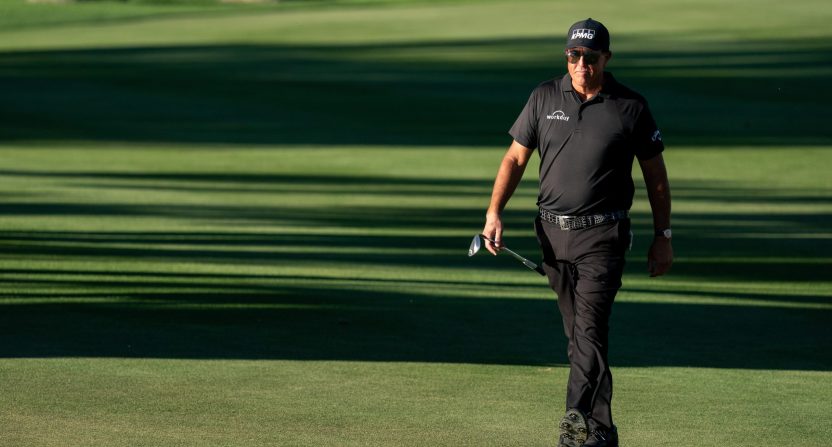 For the last three decades, Phil Mickelson has called the PGA Tour his professional home. After all that time, one of the greatest to ever do it is considering other golfing options.

Mickelson’s issues are based on what he perceives is the greed of the PGA Tour. Namely, the media rights that the Tour owns, even though the media it’s using was supplied by the golfers.

“There are many issues, but that is one of the biggest,” Mickelson said, per John Huggan, Golf Digest. “For me personally, it’s not enough that they are sitting on hundreds of millions of digital moments. They also have access to my shots, access I do not have. They also charge companies to use shots I have hit. And when I did ‘The Match’—there have been five of them—the tour forced me to pay them $1 million each time. For my own media rights. That type of greed is, to me, beyond obnoxious.”

The example cited by Huggan was a shot Mickelson hit at the 2010 Masters, whose media rights are owned by Augusta National. Facing a shot from the pine straw on the 13th hole, Mickelson attempted a daring shot to reach the Par-5 green in two, rather than lay up short of the creek in front of the green. The risk paid off, Mickelson hit the ball close to the hole and while he missed his eagle putt, the easy birdie all but wrapped up the Green Jacket.

The cost to use that shot was $30,000 per second upon each airing. All told, it cost $3.5 million to use it. That dwarfs the $1.35 million that Mickelson earned for winning the event.

What could potentially lure Mickelson away is the Super Golf League. While the league has yet to be officially born, it’s backed by the Saudis. It’s also seeking to land some big-name golfers. Not only is it alluring to Mickelson, but Huggan quotes him as saying that “pretty much every player in the top 100 has been contacted at some point.”

That’s backed up elsewhere. The Telegraph reported that Ian Poulter has been offered $30 million to join. Dustin Johnson wouldn’t talk about his offer but was quoted by James Hibbit of Golf Monthly as saying it’s “not similar” to Poulter’s. Finally, Derek Lewerson of the Daily Mail has reported that “Bryson DeChambeau has been offered a staggering £100million to be the face of the Saudi golf revolution,” which translates to $135 million. DeChambeau has denied that report.

Mickelson, who will be 52 in June, and Poulter, 46, Both would potentially be risking Ryder Cup captaincies. The PGA Tour and DP World Tour (FKA, the European Tour) have said that anyone going to the startup tour would be banned for life.

DeChambeau, though is 28 and Johnson will be 38 in June. They would be taking some risk in leaving the PGA Tour and potentially facing a lifetime ban. But the Tour would also be hurt by losing two of the best in the world in their primes. If those two go and if Mickelson is indeed right about the number of prominent players who have been contacted, other great players certainly will follow.

So, what could the PGA Tour do to ensure that the best golfers in the world stayed there? Mickelson has one idea.

“If the tour wanted to end any threat [from Saudi or anywhere else], they could just hand back the media rights to the players,” he said, per Huggan. “But they would rather throw $25 million here and $40 million there than give back the roughly $20 billion in digital assets they control. Or give up access to the $50-plus million they make every year on their own media channel.”

If Mickelson and others do indeed decide to go to the Saudi League once it gets going, the PGA Tour will certainly become more conciliatory. Maybe they won’t give up 100% of what Mickelson (and presumably other golfers) would want. But nobody with the PGA Tour or DP Tour wants to see the best golfers in the world playing for big money elsewhere. They want young golfers to dream of playing on their tours. If the best are playing on other tours, that won’t happen.