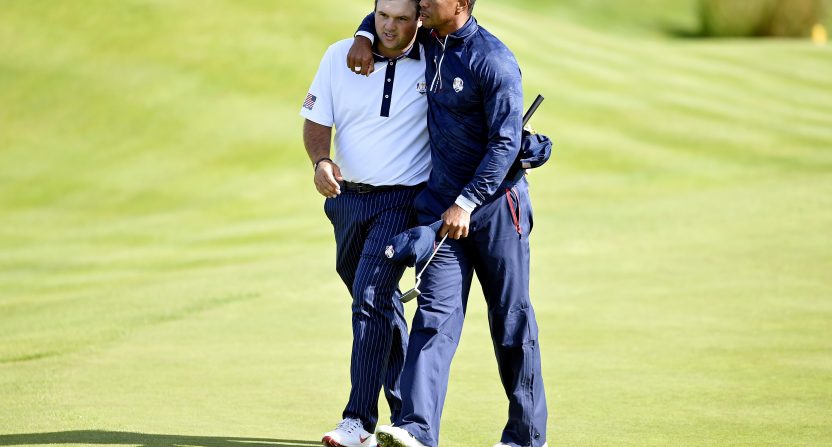 After day 1 in Paris, the United States was in a bit of trouble. The Americans won the opening session 3-1, but were swept 4-0 in alternate shot to fall behind 5-3 heading into Saturday.

American captain Jim Furyk decided to send out the exact same best ball pairings early Saturday morning, hoping to recapture the Friday magic, only to see the Europeans win three of four matches with ease. That put the Americans way behind, trailing 8-4 with a legitimate chance to be essentially eliminated during the afternoon alternate shot session.

That didn’t quite happen. Tiger Woods paired with Bryson DeChambeau to lose to the European juggernaut tandem of Francesco Molinari and Tommy Fleetwood. That win sent Molinari and Fleetwood to 4-0 together, with three wins coming against a team featuring Tiger. Molinari and Fleetwood have been so dominant they’ve only played past the 15th hole once in four matches. Tiger, meanwhile, played decent golf but went 0-3, dragged down by a disappointing Patrick Reed and a debuting Bryson DeChambeau.

Phil Mickelson was benched for the entire day Saturday, which made sense after his shaky performance on Friday afternoon; that means that he’ll go into Sunday having played just 14 holes in competition, during which he played just half the shots.

Phil’s figuratively sub-par play was not the only American problem; there were few bright spots in two days. The team of Jordan Spieth and Justin Thomas went 3-1 to account for half the team’s points, Webb Simpson played solid golf despite being attached to the ailing Bubba Watson, and…that’s about it, actually.

At the start of the week, @chambleebrandel said not to look at decision to split up Reed/Spieth as breaking up Seve/Ollie but rather starting a real Seve/Ollie redux with JT for the next 10-15 years.

The split Saturday afternoon session was key, though, as it kept the deficit at 10-6. There are 12 points available tomorrow in singles play, and while 10-6 is a big hole, it’s also identical to the situation in 1999 and 2o12, when the Americans and Europeans came back to win thrillers, respectively. It was also the score in 2014, a Ryder Cup that finished with a complete “overhaul” of the American system in an effort to avoid such a disastrous defeat again.

Anything can still happen tomorrow, and it looks like we’ll either get a thrilling comeback for a close finish or a European blowout, which we ranked as the most entertaining possible outcome ahead of the event.

So far, though, it’s hard to look at this as anything other than a humbling affair for the United States. Maybe that’s a good thing.