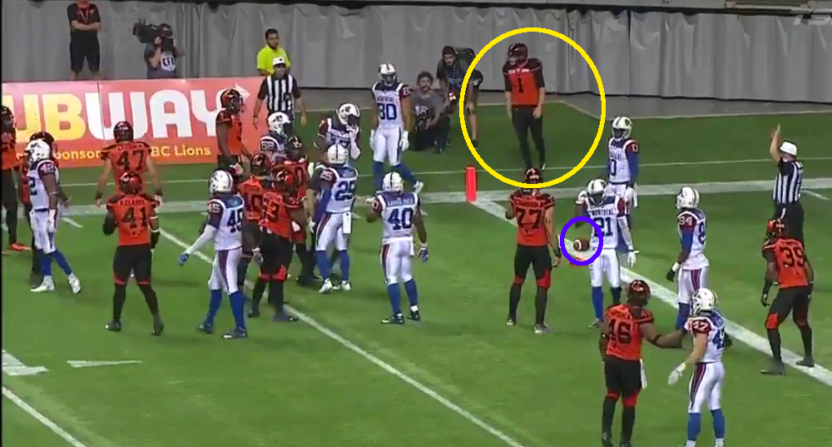 The Canadian Football League has long been known for some wacky plays, and that’s especially true in the kicking game. On that front, the CFL’s seen everything from punts back and forth to avoid a game-ending single, onside punts recovered for touchdowns, onside kicks on field goals, and pass-and-punt plays. Friday night’s Montreal Alouettes – B.C. Lions game brought one of the strangest yet, though, one plenty of veteran CFL fans and media said they hadn’t seen before, and one where a key player immediately told TSN’s cameras afterwards “I didn’t know the rule!” That would be B.C. punter Ty Long, and this all started with his punt:

The @BCLions earned a single point on this play after players on the field stalled for an extended period of time. #FridayNightFootball pic.twitter.com/CpntnSsLgu

So, this requires a bit of explanation, as the rules in question are different then in American football. Montreal returner Stefan Logan is a CFL veteran (and a former Lion, to boot), and he doesn’t immediately pick up the ball here (circled in blue above) because he’s hoping one of two things will happen; one, it will fully roll into the end zone, where he can then pick it up and kneel to concede a rouge, which gives B.C. a single point but gives Montreal the ball on their own 35-yard line. (Much better than if Logan picks it up inside the five and gets tackled.)

The other, but less promising, hope for Logan is if the ball stops short of the goal line, but if a Lions’ player is inside five yards of the ball when the returning team first touches it; that’s a no yards penalty, and while it would only be five yards in this case thanks to the ball having already hit the ground, that’s better than if Logan gets tackled inside the five without a no yards penalty. (That’s also why most of the Lions are hanging back.)

There’s one danger for Montreal in this approach, though, and it’s Long (circled in yellow above). In the CFL, anyone who’s behind the ball when it’s kicked can legally recover and advance it; that’s when you get onside punts and onside field goals. In a situation like this where it isn’t a fake or onside kick, the only player thus eligible is the kicker/punter. But Long is absolutely able to fall on that ball for a potential touchdown (it could have possibly been nullified thanks to no yards if teammates were inside five yards, and they’re close, but it’s worth a shot; the five yards is the radius of a circle centered on the ball, not just yard lines).

And it seems that Long realizes that part (or caught on to people yelling at him from the sidelines). You see him (#1) running down the sideline about 25 seconds in, but getting pushed out of bounds. And it’s after that, with Long making no effort to return and go for the ball, that the referees blow the play dead and award a single. This is what led to Long telling the camera “I didn’t know the rule!”

The rule in question doesn’t usually apply to kicking, and that explains why Long doesn’t know it. It’s from the illegal participation part of the rulebook (Rule 1, Section 9, Article 8 on page 21 here):

So Long could have come back in, and he could potentially have scored a touchdown. (Of course, Logan might have seen him coming and picked it up anyway. And the rules favor him there ) But the referees handled this correctly; they didn’t blow the whistle until it became clear that neither team was going to retrieve the ball. (That’s a valid option on page 44 of the rulebook: “If the kicked ball has not yet been touched and, in the judgment of the official, no effort is being made by either team to recover the ball, the ball may be declared dead and possession awarded to the receiving team.”)

Oh, and really, the actual rule error here may be Logan’s. This was eventually ruled a rouge, and that’s because the ball was determined to be in the goal area when it was dead, one of the conditions for a single (page 30). and there are examples in the rules citing that it’s a rouge (rather than a safety) if a returner fumbles it into his own end zone, recovers and is tackled, or if he picks up the ball in the field of play and momentum carries him into the end zone. (Update: And, as commenter Richard Olson notes, page 19 says “The ball is in goal if it is on or behind the Goal Line, even in the air,” so that seems to indicate a ball on the line counts as in for purposes of a single.) So Logan presumably could have picked this up sooner and not risked Long recovering and still had it called a rouge. As with Long’s mistake, though, those are uncommon situations. And it’s understandable that Logan would want to wait to try and avoid being tackled at the 1 or conceding a safety. As long as he remained vigilant for Long, his approach was fine.

Yes, Long maybe should have known the rule here (even kickers probably should be briefed on illegal participation in the case of needing to make downfield tackles), and he should have tried to recover even after he was pushed out of bounds. But, it didn’t wind up costing his team anyway. The Lions were up 33-12 at the time, and they went on to win 41-18 and improve to 6-5. But it’s the wacky punt play that may be remembered far longer than their victory. And Long will definitely know that rule the next time around.