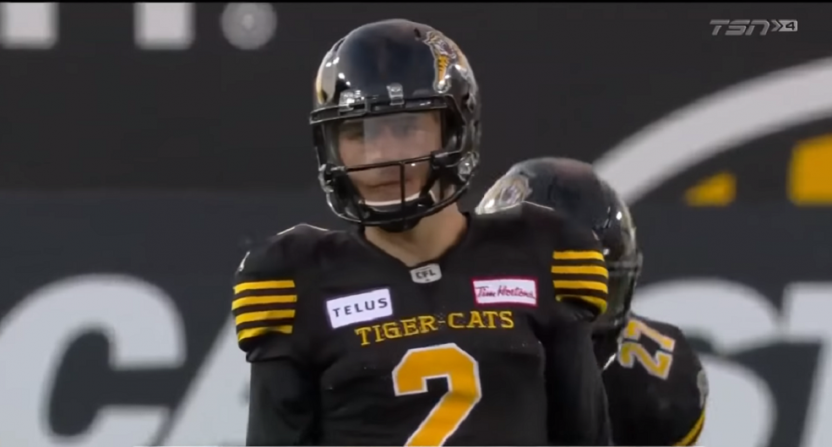 Johnny Manziel to Montreal is a done deal. Expect an announcement shortly.

The other players and picks here are significant too. Washington is a 31-year-old veteran offensive American lineman who started at left tackle for Hamilton this week (and for most of the season so far), while Rice is a 30-year-old Canadian backup guard. Westerman is a 33-year-old Canadian defensive tackle/defensive end who’s been starting for the Alouettes, while Williams is a 30-year-old American receiver and a four-time divisional (and one-time league all-star), albeit someone who hasn’t produced at a high level the last few years and is also battling a hamstring injury. (He’s going back to where he began his CFL career and where he controversially exited the league the first time, though.) And first-round picks in the CFL draft are important, and perhaps the biggest prize here.

The Tiger-Cats signed Manziel this offseason after a long courtship, and he showed some promise in the preseason against the Alouettes, creating some interest and even causing some TV schedule rearranging. But Hamilton starter Jeremiah Masoli has been playing well, posting nine straight games with 300-plus passing yards (tied for the CFL all-time record), so Manziel hasn’t gotten a chance to play in the regular season yet. And that’s despite Ticats’ head coach June Jones declaring that Manziel should be back in the NFL. Even with Masoli’s streak ending this week (he threw for 184 yards and an interception in a 31-20 loss to the Saskatchewan Roughriders Thursday), Manziel still wasn’t pulled off the bench, and Hamilton seems confident enough in Masoli to trade top backup Manziel for help at other positions. Of course, it’s also possible that Manziel was growing tired of being a backup and put some pressure on the Ticats to move him.

The Alouettes are a great potential destination for Manziel when it comes to playing time, as they have arguably the weakest quarterback situation in the CFL. The nominal starter is 31-year-old veteran Drew Willy, but he got hurt early on in their 25-8 loss to the Calgary Stampeders Saturday, and he hasn’t exactly shown a great deal of CFL promise in his career so far. (He began as a backup with Saskatchewan, then was Winnipeg’s starter in 2015 and 2016, but battled injuries and ineffectiveness and lost that job in 2016. He was traded to Toronto midway through that year, but didn’t accomplish much there and was cut last June. He then wound up in Montreal last year, started six games without putting up great numbers, and then started some more this year.) Backup Matthew Shiltz is younger (25), but hasn’t exactly impressed in his CFL action to date either, including completing just 16 of 25 passes for 160 yards with a touchdown and two interceptions in relief of Willy Saturday.

So Manziel could conceivably jump in pretty soon. Thursday’s game against Edmonton may be too quick for a start, but it may not. And Montreal’s next game after Thursday just so happens to be against Hamilton on Friday, August 3). And it should be noted that Manziel has some familiarity with Alouettes’ head coach Mike Sherman, who was the head coach at Texas A&M from 2008-2011; Manziel redshirted in 2011 behind Ryan Tannehill, but Sherman should have a sense of Manziel’s skillset, and Manziel should have a sense of what Sherman wants to run. And getting a chance to play could be great for Manziel; he’s made it clear he wants to show off his skills in hopes of getting back to the NFL, but most CFL teams are pretty set with experienced starters at quarterback. Montreal is not, so this could be a good fit for him in that department.

However, just bringing in Manziel isn’t necessarily going to solve the Alouettes’ problems. This is a team that’s struggled to get anything out of the quarterback position since legendary pivot Anthony Calvillo got injured during the 2013 campaign and retired afterwards, going through the likes of Josh Neiswander, Tanner Marsh, Troy Smith (yes, Manziel isn’t even the first Heisman winner there in recent years), Jonathan Crompton, Alex Brink, Rakeem Cato, Kevin Glenn, Brandon Bridge, Vernon Adams, Darian Durant, Willy and Shiltz. (And those are just the ones who have started regular-season games.) And while much of that is on the quarterbacks, they often haven’t been surrounded with a ton of skill-position talent either; the Alouettes have plenty of roster issues, and their 1-4 record this year (with just 69 points for and 148 against) isn’t all about the pivots. And this is a whole lot to give up for an unproven QB (particularly the picks). That’s particularly true when you consider that Manziel is more likely than most to leave (for the NFL, the AAFL , the XFL or whatever else), given his name recognition south of the border and the interest he’s still drawing from American scouts.

Still, Manziel has now landed in a CFL city where it looks like he’ll at least get a chance to start. And that’s especially true considering that the Alouettes gave up decent assets for him and that they’ve been struggling at the gate for years; they might think that a name like Manziel might draw some attention. But beyond that, there are good football reasons to take a chance on him; while numerous big-name American quarterbacks haven’t done well in the CFL, Manziel’s mobility and accuracy (at least at the college level) makes him more worth a shot than many.

Ad Manziel is only 25, so it’s possible he could even turn into a longer-term answer for the Alouettes. Of course, that’s presuming he both does well and then doesn’t head to another league, both significant questions. If Manziel does do well enough here, there’s still enough U.S. buzz around him that he might not be long for the CFL. And there’s no guarantee that he’ll do well in the CFL anyway. But for Montreal, the big gamble here makes some sense. If there’s any team that particularly needs to try something new at quarterback, it’s the Alouettes, and it looks like they’re doing that. We’ll see if Manziel proves to be the answer they hoped for.

1 thought on “Johnny Manziel traded to the 1-4 Montreal Alouettes, where he should get a chance to play. But how will he do?”