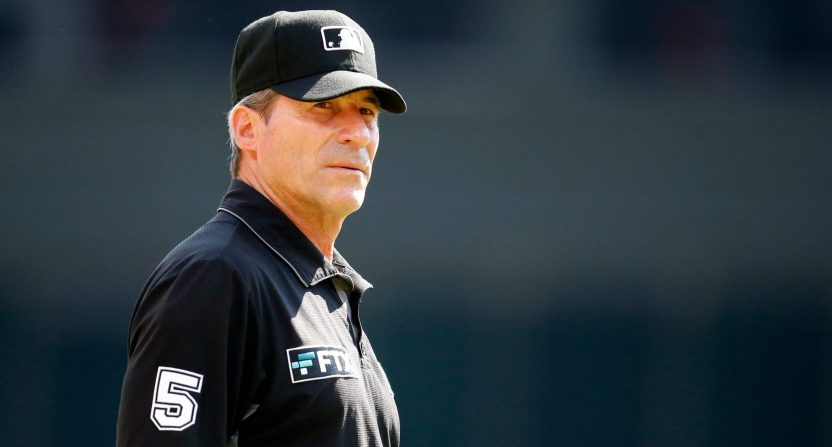 Doug Eddings did such a poor job as the home plate umpire in Tuesday’s game between the Toronto Blue Jays and Chicago White Sox that a Toronto coach was ejected before Wednesday’s game began, needing to continue the previous night’s argument.

He was so bad that some people even felt that Eddings had overtaken Angel Hernandez as MLB’s worst umpire. Hernandez was not about to let that kind of nonsense go unchecked. On Saturday, Hernandez reminded everyone that he’s still wearing the crown.

Tampa Bay Rays outfielder Brett Phillips hit what appeared to be a routine groundout in Saturday’s game against the Pittsburgh Pirates. To 99.9% of the people watching, Phillips was clearly out. Unfortunately, Hernandez, who was the first base umpire, was in the other 0.1%.

It may not be as bad as four umpires not knowing what the count was. But this is as bad as pretty much anything else we’ve seen throughout the year, and that covers some serious ground.

MLB umpires have been a hot topic throughout the season. Baseball fans were not going to let Herndanez’s Forgot About Dre moment go unnoticed.

Angel Hernandez calling this safe is… something pic.twitter.com/WJZnwEdjvy

Thought Chavis' foot came off the bag. Clearly didn't. Easiest overturned call of the season for the Pirates.

If you watch closely Angel Hernandez almost called him out… https://t.co/NFkFByhzN8

If you guessed that Angel Hernandez is the ump that called the runner safe here… you’re absolutely correct! pic.twitter.com/Do8wCIdEoJ

Angel Hernandez missed a call. Replay overturned it. The sky is blue.

When MLB finally does go to robot umpires, we can only hope that Hernandez is honored in some way as a constant reminder to why people were clamoring for them.

We also must remember one thing. As the first base umpire on Saturday, Hernandez will be calling balls and strikes on Sunday. If he could get this kind of reaction out of one call at first base, imagine what he’s capable of when he’s responsible for calling every pitch the hitters don’t swing at. If you’re going to Tropicana Field, buckle up. You’re in for a real treat.