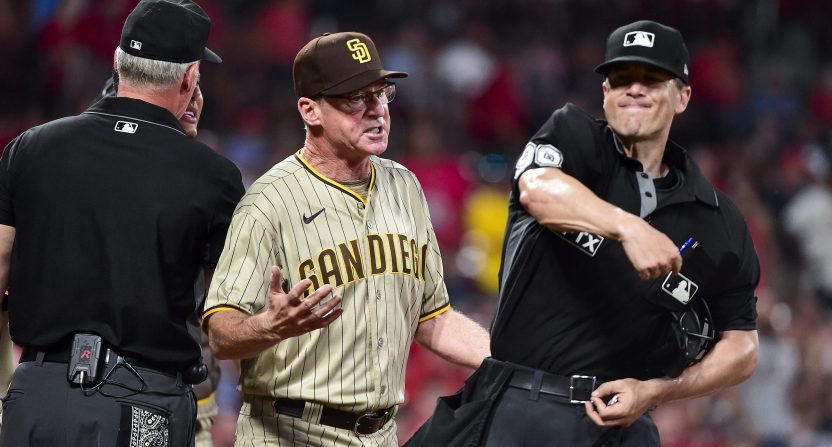 Imagine going into work one day and finding out that, while your employer isn’t planning on firing you imminently, you’re on the chopping block. What do you do?

Option No. 1 is to figure out where you’re lacking and see if you can reasonably improve. If they’re asking you to double your time at work while not offering any more money, it’s probably time to move on to another place of employment. If, however, the ways to improve are reasonable, it might be a good idea to try to make them, especially if it’s a job you like. This is even more true if you know that you can easily be replaced at your job by not a human, but a computer.

Option No. 2 is to double down on your flaws — giving everyone who might want to replace you a daily reminder of why.

For the average human, Option No. 1 seems like the obvious path to take. MLB umpires, however, don’t seem to be wired like average humans. We can’t say that every one of them has taken Option No. 2 during the 2022 season, but far too many have.

What we want, most of all, from umpires, is for them to get the calls right. But too often this year, that has not been the case. The most glaring issues come with balls and strikes, primarily because those calls can’t be reviewed. But time and time again, we’re seeing blatant errors on pitches. And while review does correct mistakes, we’ve seen it used for some baffling reasons, like four different umpires not knowing the correct count.

For some fans, the abundance of bad calls is enough of a reason to call on the Robot Umpires. Others, though, need more. Humans play baseball and humans make mistakes. Pitchers hang curveballs, fielders make errors, and hitters strike out. These are accepted parts of baseball. If human error is part of the game, an umpire making a bad call should be treated the same way as those mistakes, right? That’s one way of looking at it. And while we may not quite agree with the approach, we can understand it.

Here’s what we can’t understand or accept — umpires making themselves the show. We saw it early in the year with Dan Bellino baiting Arizona Diamondbacks pitcher Madison Bumgarner into an argument.

Bumgarner’s teammate, Zac Gallen, experienced the same thing on Memorial Day. Gallen was unhappy with the strike zone of John Libka. Libka, rather than give Gallen a warning or even eject him, decided to walk out to the pitcher’s mound. Libka was restrained by Arizona catcher Jose Herrera, and Diamondbacks manager Torey Lovullo came out to argue with Libka, leading to his own ejection but saving both of his players.

After the at bat, the umpire tried to approach Gallen on the mound which led to Torey Lovullo getting ejected pic.twitter.com/mkB7jNX3n0

How do we defend this? And if “Gallen was showing the umpire up” is your answer, we’d challenge you to try to come up with a response that people over the age of about eight would actually use. It’s the same tired nonsense that we hear every time a hitter gets beaned for flipping a bat or staring at a home run. Yes, Gallen argued the call, but he was walking away from Libka. So, even if “he was showing him up” was a valid argument, Libka was more guilty than Gallen.

And this isn’t isolated. Two days after that incident, we saw a similar one with umpire Mike Muchlinski and Oakland Athletics manager Mark Kotsay.

Yes, umpires need to control the game, and of course they shouldn’t be subjected to constant verbal abuse. But they also can’t be so thin-skinned that people objecting to a call draws such quick, passionate responses that only serve to stall the game and put themselves in the center of the spotlight.

And that really gets down to the heart of the issue. We always hear that umpires don’t want to be noticed. If a game goes by and nobody knows who’s umpiring or even knows the name of the umpires, that’s a great day. But repeatedly, we see umpires take action that flies in the face of these ideals.

One of the classic lines from the 1986 movie, Hoosiers, is “Look, mister, there’s two kinds of dumb: a guy that gets naked and runs out in the snow and barks at the moon, and a guy who does the same thing in my living room. The first one don’t matter. The second one, well, you’re kind of forced to deal with.”

That line sums up what’s happening with umpires. If they want to constantly make bad decisions and act immature in their own day-to-day lives, that’s really none of our business. But fans invest a lot of time and money into the MLB product. Players’ and managers’ jobs depend on their production, which can be altered if the umpires don’t do their jobs well. When they fail so regularly and make a spectacle of themselves, it’s something that must be dealt with.

If the human umpires don’t want to be replaced by robot umpires, they need to reverse course.