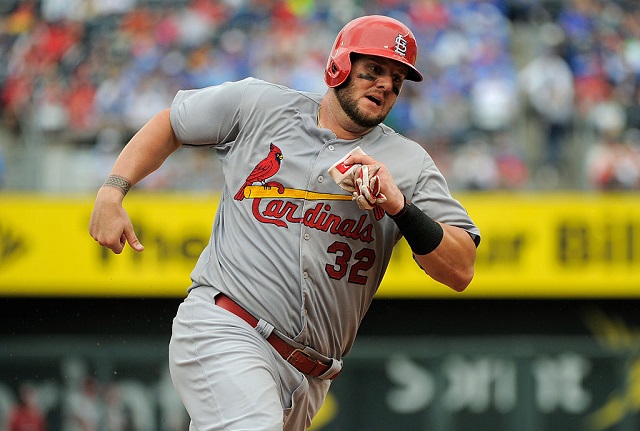 Is the designated hitter coming to a National League park near you?

This past weekend at a Cardinals fan event in St. Louis, general manager John Mozeliak said there is “more momentum” among MLB GMs and owners for putting the DH in the NL than there has been in previous years. According to the St. Louis Post-Dispatch‘s Derrick Goold, Mozeliak shared that conclusion based on conversations with fellow executives and their bosses. In the past, the topic never went anywhere when discussed among NL baseball people. But that’s apparently not happening anymore.

“I do feel like there were times I could look all of you in the face and say it’s a non-starter, it’s not being discussed at the owner level or GM,” Mozeliak told reporters. “But over the past year it has. I’m not suggesting you’re going to see a change but I definitely think the momentum (has changed).”

“Would I be interested in having talks about the DH in the National League?” Clark said to Goold at Cardinals camp in Jupiter, Fla. “I’ll offer you this, interestingly enough, that topic has come up independent of us bringing it up. It has been a topic, as I’m sure you know, a topic of discussion going back the last two bargaining agreements. Nothing has changed at this point in time. But I am guessing come 2016 that conversation will come up again.”

Well, here we are. MLB’s collective bargaining agreement between the owners and players expires in December, which is surely why this topic is being raised now. There are discussions to have, negotiations to be made. Does this mean that MLB could have a designated hitter in both leagues for the 2017 season? That would be the first opportunity for such a change to be made, but Mozeliak acknowledged that putting a DH in the NL one year from now “would seem to me a little fast.”

Before you say, “Hey, they have 11 months to work this out, and this has apparently been on table for at least a year,” look at how long it’s taken MLB to figure out the use of instant replay or the rule on home plate collisions. Those measures are still being worked out and been enforced through differing interpretations.

Yes, sometimes MLB can move quickly on a decision, as happened two years ago when umpires were told to strictly enforce the “secure possession” of a catch, only to disallow the out if a ball was dropped while the fielder was transferring it from his glove to throwing hand. Managers were using instant replay to exploit the rule. The calls were ridiculous, failing a simple eyeball test and going against everything baseball fans knew about one of the game’s most fundamental plays. Fortunately, MLB came to its senses, conceded to common sense and clarified how the catch-transfer rule should be interpreted.

Obviously, deciding to change the DH rule in the NL is a far more complicated process, one that requires a significant amount of negotiation between the players and owners.  The presumption is that the players would be in favor of the rule, which would create at least another 15 jobs for its workforce, allowing many careers to be extended and more money to be earned.

However, Clark said last March that such an assumption shouldn’t be made. Perhaps a sizable portion of the players have a purist view of the game. Or NL pitchers like the fact that they only have to regularly face eight hitters in a lineup, and the inclusion of a DH would suddenly make their jobs more difficult. The lack of a DH in the NL might also allow pitchers to extend their careers. (And it’s probably not a coincidence that four of the seven pitchers that signed the largest free agent deals this offseason went to NL clubs.) Some pitchers actually enjoy hitting. A few of them, such as Madison Bumgarner, Zack Greinke and Mike Leake, are even good at it. But those are the exceptions.

Mozeliak insists the Cardinals would not be in favor of changing the rule. But in looking at the St. Louis roster, it’s worth asking if the team should consider otherwise. The Cards already have two players who would be ideally suited for a DH role in Matt Adams and Brandon Moss. Outfielder Matt Holliday would surely benefit from taking some days off from the field, allowing his increasingly creaky body to get some rest.

Then there’s the larger benefit of the Cardinals not having their pitchers bat: allowing them to avoid getting injured at the plate or on the basepaths. St. Louis lost its ace early last season when Adam Wainwright tore his left Achilles tendon running out of the box and was essentially lost for the year. Sure, he could have suffered the same injury while pitching or fielding, during pregame warmups or even running up and down the dugout steps. But why put a pitcher in position to get hurt by asking him to do something with which he’s not comfortable or familiar enough?

I realize that’s not a new argument. But when seven of the 10 largest free agent contracts this offseason went to pitchers, it’s not difficult to believe that owners would prefer to protect those investments as much as possible.

As Mozeliak said, momentum is building in support of the DH. Offense is on the decline throughout the sport. Multiple pinch-hitting and pitching changes drag out the end of ballgames. (Yes, increased offense could make games longer too, but MLB is surely willing to make that trade.) Having year-round interleague play is the first step in a process that will likely make the National and American Leagues eventually play under the same set of rules. And it sounds as if those games could be a testing ground for implementing the DH, allowing NL teams to use the extra hitter in their home ballparks.

That could allow MLB to dip its toe in the pool before making a bigger change. While 2017 is probably too soon to put the DH in the NL, using it throughout interleague play might be a preliminary change that players and owners could agree to in the next collective bargaining agreement. Given that these deals last approximately four years, that provides enough time for MLB to decide whether or not to push forward for a DH in both leagues year-round, making whatever arguments or discussions that might be necessary until the next CBA is negotiated.

The change seems inevitable, a matter of when, rather than if. Even those opposed to it seem to now acknowledge that it’s only a matter of time before pitchers batting is a thing of baseball’s past.