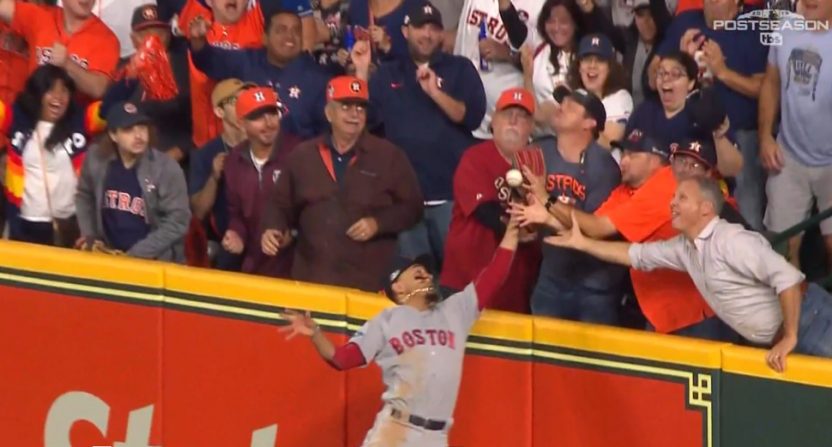 Fan interference calls (or lack thereof) in the baseball postseason have long been controversial, and that’s led to lots of brief fame or infamy from fans from Jeffrey Maier to Steve Bartman to Jay and Jared Macchirole. But what happened Wednesday night in Houston during Game 4 of the American League Championship Series was perhaps particularly notable, as Astros’ fan Troy Caldwell got to make his case to the public during the game that he didn’t interfere (despite umpire Joe West’s call that he did) with Mookie Betts’ attempted catch of a first-inning Jose Altuve home run. First, here’s the initial play, and the replay:

And here’s what Caldwell told Matt Young of The Houston Chronicle soon after:

“I’m going to need security to escort me out of here if the Astros don’t come back to win this,” said Caldwell, who grew up in Houston but currently lives in Atlanta and flew to town just for this game.

…”I think you know what I think of Joe West right about now,” Caldwell said.

At least early in Wednesday’s game, Caldwell had the support of Astros fans sitting around him, who were busier yelling at West than they were bothering Caldwell.

“I promise you I didn’t do anything wrong,” Caldwell said.

As noted by Caldwell, the rules do differentiate between interference that happens on the field and in the stands. Here’s the key part of that rule and the official comment on it in the MLB rulebook, as relayed in this helpful 2010 Fangraphs article by David Wade:

APPROVED RULING: If a spectator clearly prevents a fielder from catching a fly ball, the umpire shall declare the batter out.

…Rule 3.16 Comment: There is a difference between a ball which has been thrown or batted into the stands, touching a spectator thereby being out of play even though it rebounds onto the field and a spectator going onto the field or reaching over, under or through a barrier and touching a ball in play or touching or otherwise interfering with a player. In the latter case it is clearly intentional and shall be dealt with as intentional interference as in Rule 3.15. Batter and runners shall be placed where in the umpire’s judgment they would have been had the interference not occurred.

No interference shall be allowed when a fielder reaches over a fence, railing, rope or into a stand to catch a ball. He does so at his own risk. However, should a spectator reach out on the playing field side of such fence, railing or rope, and plainly prevent the fielder from catching the ball, then the batsman should be called out for the spectator’s interference.

So, it appears the key debate here is if the interference happened in the field of play or in the stands. West’s call seems to have been based on the former, while Caldwell is arguing for the latter. And, unsurprisingly, Astros’ manager A.J. Hinch weighed in in support of that idea during an in-game interview with TBS’ Lauren Shehadi, also arguing that it was unlikely Betts would actually have made the catch (which maybe ties into the “clearly prevents” part of the discussion):

“He just said that there was fan interference on the field. My argument was more about the fact that the ball was leaving the yard, the trajectory was there. Jose paid kind of the ultimate price for something that’s out of his control. I’m not sure if Mookie makes that catch. He’s a great athlete, but how it’s an assumed out is unbelievable.”

If that play winds up impacting the outcome of this game, it’s going to be debated for a long while to come. But there’s already been a lot of debate about it from fans of both teams, as well as from media members. And what’s really interesting is that in the middle of this game, we’ve already heard from the fan involved and from one of the managers. Good for Young and the Chronicle for getting comments from the fan, and good for TBS and Shehadi for getting Hinch to weigh in; it’s interesting to hear affected parties commenting while the game’s still up for grabs. But that’s a significant change from how some of these incidents played out in the past.