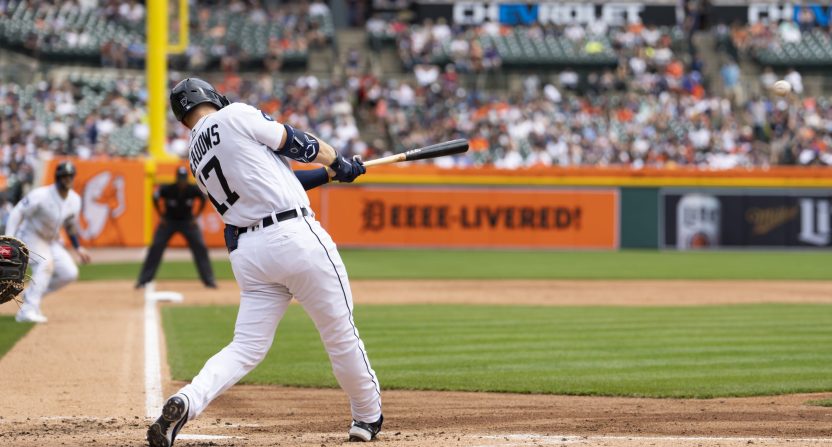 It’s been a trying year for the Detroit Tigers. They were a trendy pick as a darkhorse postseason contender at the beginning of the season but enter Friday at 50-81, the second-worst record in the American League. The 2022 season has also been trying for Austin Meadows, one of Detroit’s key offseason additions. On Friday, he took to Twitter to explain what has been going on.

Meadows shared that “This season has been an unfortunate struggle with a series of injuries and illness.” After briefly detailing those, he added “What I have told very few people is that I also have been struggling with my mental health in a way that has extended my time away from the game that I love so much. I’ve been dealing with this privately with a great team of professionals, but I need to continue to put in the hard work off the field towards feeling mentally healthy.”

Tigers manager A.J. Hinch praised Meadows for getting the help he needs.

A.J. Hinch on Austin Meadows: "I commend him for doing it, very proud of him, it's not easy in this sport, as an athlete, as a competitor, to admit when you need help outside the normal scope of baseball. … We’ll offer him all the support we can, and we have been." https://t.co/ql5Pd39H4X

He was not alone. The MLB world, as a whole, supported Meadows and his message.

Grateful to @austin_meadows for being vulnerable enough to share his journey in the hopes of helping others. All the love and support for you, Austin! https://t.co/0sjS8mu9qa

Kudos to Austin Meadows for sharing this message https://t.co/SBDeYMmKqP

Hope this post will help others realize it's OK to get help. https://t.co/zhmm6Rq89U

Sports have been almost universally bad on the important stuff forever, but finally allowing room for athletes to admit they need help and to actually get it is one of the few bright spots. It's okay to not be okay. https://t.co/CMZRdeu2xj

Kudos to Austin Meadows for being so open about his time away and his mental health. 👏 https://t.co/eAhFvMoW30

Brave, honest, vulnerable. You have a lot of people rooting for you, Austin. https://t.co/JaQWfVasSX

The Tigers acquired Meadows from the Tampa Bay Rays in April, days before the regular season began. Meadows has played in only 36 games this season and last played on June 15.