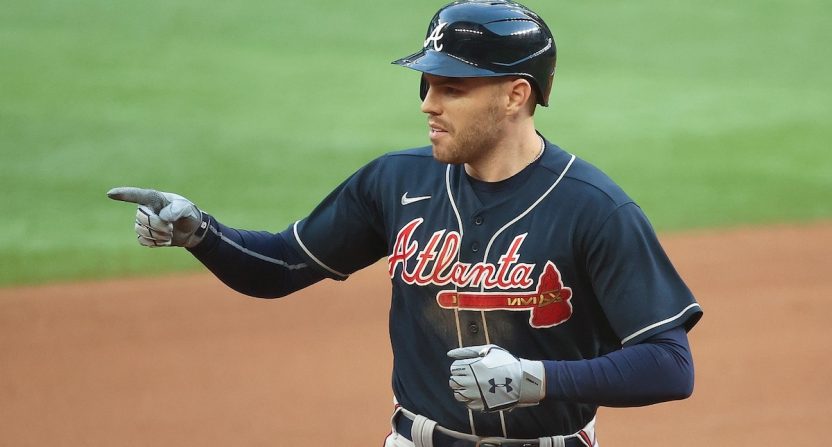 The Los Angeles Dodgers appear to be in trouble, though might still have a pulse.

No, an 0-2 deficit in the NLCS to the Atlanta Braves isn’t insurmountable. Just last year, the Astros were down 0-2 to the Nationals in the World Series and came back to force a Game 7. (Don’t tell Dodgers fans that Houston lost.) L.A. was also behind 2-1 in the 2018 NLCS to the Brewers and rallied to win in seven games.

But this feels different because Atlanta is in control of this series, despite a ninth-inning rally that made Game 2 close. Braves pitching has largely handcuffed a Dodgers lineup that scored the most runs in MLB (349) during the shortened regular season. Atlanta’s success going into the NLCS wasn’t just from facing the Reds and Marlins in the first two playoff rounds.

As was the case in Game 1, Freddie Freeman put the Braves on the board first with a home run. This time, it was a two-run shot that sent the Dodgers backpedaling early.

Freddie Freeman strikes first for the second game in a row. Dodgers down 2-0 to the Braves, fourth inning 💪 pic.twitter.com/BRm9lDyuEl

Tony Gonsolin wasn’t great making an emergency start for the Dodgers in place of Clayton Kershaw and pitching for the first time since Sept. 26. The rookie struck out seven batters in 4 1/3 innings, but allowed five runs on three hits.

With how Ian Anderson had been pitching for the Braves, allowing no runs in his first two postseason starts (and compiling a 1.95 ERA in six regular-season starts), Gonsolin needed to be really sharp and unfortunately wasn’t.

But even if Gonsolin threw five no-hit innings — or if Kershaw had been able to pitch — would it have mattered if the Dodgers lineup didn’t score any runs for him?

Corey Seager generated most of the offense, driving in four runs. But his three-run homer came with the Braves already leading 7-0 in the seventh inning and his RBI double was in the ninth, facing an 8-3 deficit.

Max Muncy added a two-run shot, followed by Cody Bellinger hitting an RBI triple in the ninth to make the Braves nervous, but that ultimately wasn’t enough.

As a whole, the Dodgers left nine runners on base. Smith squandered a chance to give L.A. an early lead when he grounded out to third with the bases loaded in the first inning. Yes, there were two outs, but Anderson was allowed to escape with no runs allowed.

Do the Dodgers have some confidence after scoring four runs in the ninth off Josh Tomlin? Maybe. At least they know scoring runs is possible against Atlanta pitching now. Bellinger’s run-scoring triple could be particularly big since he was 0-for-4 with two strikeouts before that.

Game 3 of the NLCS is scheduled for 6:05 p.m. ET. Kyle Wright gets the starting nod for the Braves. He threw six scoreless innings against the Marlins in the NLDS. But he might be facing a Dodgers lineup that’s feeling good again.

Julio Urias starts for the Dodgers, as Kershaw gets one more game to recuperate and possibly start Game 4. The left-hander has been outstanding in two appearances this postseason, allowing one run and four hits in eight innings with 11 strikeouts and one walk. He’ll need to be that good again, but his lineup needs to support him with some runs.