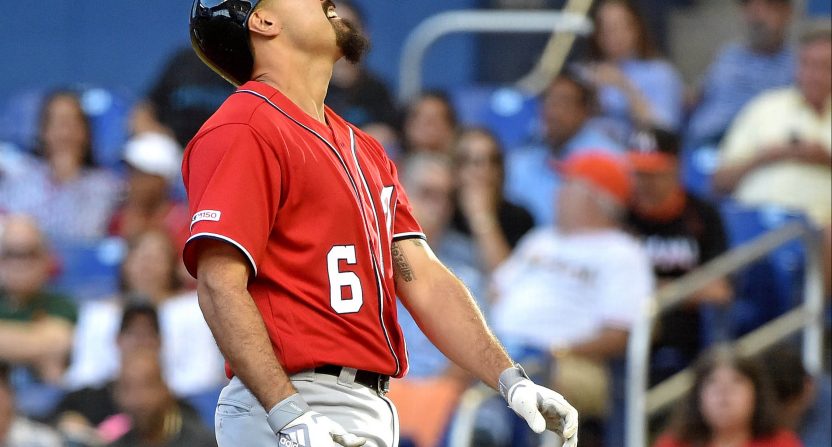 Pop quiz: which team has the worst record in the National League? That’s an easy question: the Miami Marlins are 10-24 and going nowhere fast. But which team has the *second* worst record in the National League? That would be the Washington Nationals, who are 14-20 and five games out in the NL East after roughly 20% of the season. Only the Marlins, Royals, and Orioles (rough season so far for baseball in the DC/Baltimore area) have worse records so far in 2019 than the Nationals, who came into 2019 as a contender in the loaded NL East.

Not all of these seasons are the same, of course. Matt Williams managed the 2015 team, which featured Bryce Harper, Jordan Zimmermann, Jayson Werth, Ian Desmond, and Yunel Escobar, among other departed players. The 2018 season, of course, was Harper’s final year with the Nationals.

The 2019 Nationals have been plagued with injuries so far, which has not helped them one bit. Anthony Rendon, in his walk year, has been their best player by far, but has played just 20 games while dealing with an elbow injury. His replacement at third has been veteran Howie Kendrick, who has admirably filled in, slashing .338/.405/.592 with five homers. Shortstop Trea Turner has played in just four games, but his replacements haven’t fared as well as Kendrick. Utilityman Wilmer Difo is hitting .239/.307/.326, while rookie Carter Kieboom is playing even worse with a .128/.209/.282 triple slash.

Ryan Zimmerman has been hurt (again), and hasn’t produced when actually healthy. Matt Adams has filled in at first and provided roughly the same level of production, but a combined six homers in 153 plate appearances between the two won’t get the job done (not to mention the sub-.300 OBP). Second baseman Brian Dozier has been healthy, but has been a total disaster offensively, homering five times to go along with a .181/.295/.333 slash line. NL Rookie of the Year runner-up Juan Soto is going through a sophomore slump compared to his stellar 2018 campaign (.248/.368/.467), and is on the DL. Adam Eaton, Victor Robles, and the new catching duo of Yan Gomes and Kurt Suzuki have all pulled their weight offensively.

Washington is also a terrible defensive team. Their -27 DRS and -13.3 UZR/150 are both the second-worst in baseball (ahead of just the Seattle Mariners), and in case you’re into more flawed, traditional stats like fielding percentage and errors, they rank in the bottom five in baseball in both of those stats too. The main culprits are Kieboom (-6 DRS and four errors in just 90 innings), Soto (-5 DRS in 251 innings), Rendon (-4 DRS in 169 innings), and Difo (-4 DRS in 184 innings). This isn’t exactly a new trend – the Nationals were poor defensively in both 2017 and 2018, but losing Harper and Daniel Murphy should have theoretically helped the defense. It hasn’t.

But the rest of the staff has been a disappointment, to put it mildly. Jeremy Hellickson and Anibal Sanchez both have ERAs over 5.00 and have combined for two starts (out of 12) of at least six innings. Trevor Rosenthal somehow allowed 12 runs in three innings over seven appearances. Matt Grace, Tony Sipp, and Wander Suero all have been used at least 16 times each and have ERAs of at least 6.00. Joe Ross has an ERA of over 12 in nine relief appearances with as many walks as strikeouts in his return from Tommy John surgery.

Overall, the Nationals need to be better across the board. Their offense is in the middle of the pack in baseball, ranking 15th in wOBA (.319) and 18th in wRC+ (96). The defense, as mentioned earlier, is one of the worst in baseball. The Nationals rotation ERA of 4.10 ranks 11th in MLB, though their 3.35 FIP ranks third (thanks, defense!) and only the Indians rotation strikes out more hitters per nine innings than Washington. The team’s bullpen ERA is nearly half a run worse than any other team in baseball, though their FIP is middle of the pack (and incredibly, second-best in the NL East).

Many of the Nationals’ struggles can be rectified by the team just getting healthy. Turner returning will bump Difo back to the bench and Kieboom to the minors, while Rendon’s return will allow Kendrick to stop playing every day. Getting Soto back will allow the team to roll out their full strength outfield (alongside Adam Eaton and Victor Robles, who are far from issues on this team) and keep the light-hitting Michael A. Taylor in the bench. The bullpen is a tougher problem to rectify, and firing pitching coach Derek Lilliquist just weeks into the season won’t be the fix that the team expects it to be. The team can probably cut the cord on Rosenthal (who is back on the DL), and there are zero issues with the performances of Doolittle and Barraclough thus far. Despite their terrible ERAs, Grace, Sipp, and Suero haven’t been nearly as bad as you might expect, and maybe their strand rates will actually clear 60% with some better defense behind them.

We’ll have a much better idea about the 2019 Nationals come Memorial Day. Over the next two weeks, Washington has two more games in Milwaukee, four in LA with the Dodgers, three with the Mets, three with the Cubs, and four in Flushing with the Mets. That’s a brutal stretch, featuring nine games against three of the NL’s top five teams and another seven with a division rival. Even if the Nationals split those 16 games, they’ll still be sitting at 22-28 nearly a third of the way through the season. If they’re not even able to split those 16 games, the team’s winning percentage could be under .400, and in a division like the NL East, having to leapfrog three teams in a little over 100 games could be a daunting task for any team – let alone a team with the issues that the Nationals have shown this year.