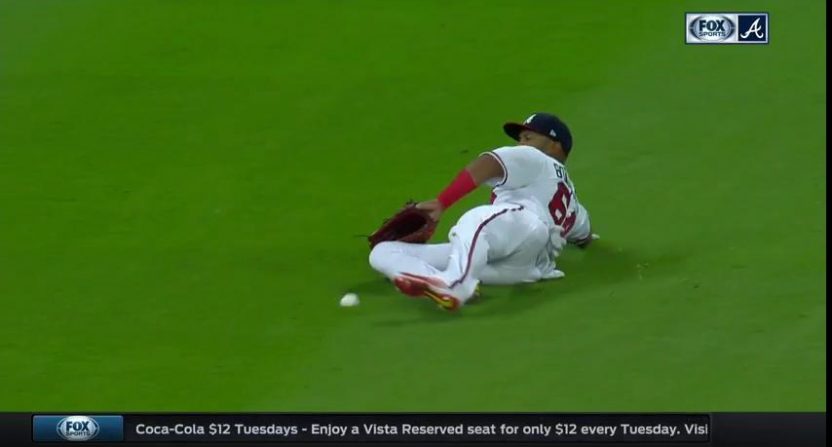 C.B. Bucknor must be trying to give us the belief that we can become MLB umpires. Because I have to imagine you or I would be way more competent at the job than this guy.

After almost ruining the end of the Nationals-Braves game last night, Bucknor came back for night two of his “Incredibly Incompetent Tour” of the major leagues.

While working third base tonight, Bucknor again bailed out the Braves with a bad call as he ruled a one-hopper hit by Bryce Harper toward Emilio Bonifacio as an out.

Yes, that was ruled an out. A one-hopper that fell and bounced a couple feet before landing in Bonifacio’s glove was ruled an out. Forget about the zoomed in replay angle, everyone in SunTrust Park other than the person who made the call thought that was an out. It was so bad that Bucknor’s call on a play that occurred in left field, had to be overruled by the first base umpire. That’s when you know you made a bad call.

I have sympathy for officials because they’re human and make mistakes but even I can’t defend someone making two horrific calls in consecutive nights. I mean seriously, if I was as incompetent at my job as C.B. Bucknor is with his, I would hope my bosses would have the decency to fire me. Or at the very least, let me know that I suck at my job and need to improve or else I’ll be fired.

Unsurprisingly, Bucknor was slayed in social media for the bad call.

Nothing brings the entire #MLB fan base together like our hate for CB Bucknor.

"If you take away the 2 grand slams, we have a tie game"
"Well i know where we can start, that man at 3rd [CB Bucknor]"
The braves tv crew ?

CB Bucknor is actually getting paid to be a MLB umpire. Let that simmer. #Braves

I mean is CB Bucknor doing this on purpose he has to be. I mean you can't b that bad lol

CB Bucknor says this is clearly an apple.. #Nats pic.twitter.com/t2p2KSAN67

@brody_marino We ought to just put CB Bucknor, Laz Diaz, Joe West, and Angel Hernandez on one crew to consolidate most of MLB's umpire problems.

CB Bucknor is awful. Just missed a ball bounce into a glove not more than 20 yards directly in front of him. Signaled Out. Was overruled.

I’m afraid to imagine what Bucknor could possibly come up with for a third edition. Hopefully when Braves and Nationals players talk about the game and talk about Bucknor’s abilities as an umpire, Major League Baseball takes it easy when it comes to any fines for criticizing officials. Because for what happened over the past two nights, they’re completely justified.