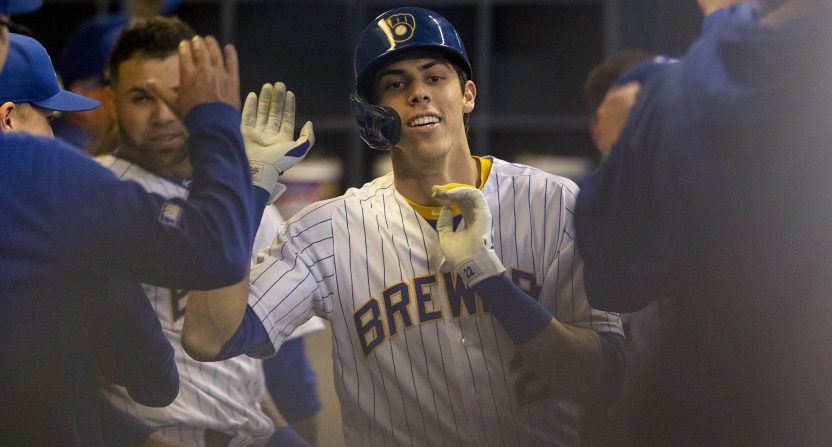 When the Milwaukee Brewers acquired Christian Yelich from the Miami Marlins in January 2018, it was viewed as a steal of a deal for the Brewers. Yelich was worth an average of 5.0 WAR according to FanGraphs (fWAR) over 2016-17, and he was entering his age-26 season with Milwaukee. Baseball evaluators believed there was more power potential in Yelich’s bat, with his career-high in homers being 21 with the Marlins in 2017.

Still, it was expected that Yelich would regress back to simply “awesome” territory in 2019, but it seems he may be the new Barry Bonds and keep up the absurd production shown in last season’s second half.

Yelich cranked two more dingers in the Brewers’ 5-0 win over the Los Angeles Dodgers on Saturday night, giving him 13 on the season.

The 13 homers are three more than anybody else in baseball has (the Dodgers’ Cody Bellinger has 10). Heck, it’s three more homers than the Detroit Tigers have as a team. And all 13 Yelich homers have come at Miller Park.

No one else thinks it's statistically crazy that every single one of Yelich's 13 homers so far this year have come at home, and 0 have come on the road? That's not a fun statistical quirk? I just think it's wild.

Not about fishy/not fishy, bc whatever. It's just a little crazy.

Some more numbers and factoids to show how insane Yelich has been:

He needs just one more homer to tie the record for most homers by May 1 (Albert Pujols and Alex Rodriguez hit 14).

The most home runs ever before May 1, per @ESPNStatsInfo: Albert Pujols and Alex Rodriguez with 14.

He's not Mike Trout. But calling Yelich the second-best player in baseball at this point is not a stretch.

Because the people want apples to apples, and I am but their humble servant, the following numbers are through 22 games:

He reached 13 homers in four fewer plate appearances than Bonds did in 2001, the year Bonds blasted 73 dingers.

Maybe Yelich slows down a bit at some point this season, but we’re at the point where we probably shouldn’t expect it. He’s showing that his 2018 Bonds-esque second half may be no fluke, and repeating as the NL MVP is a very real possibility. His efforts have led the Brewers to a 13-9 record.