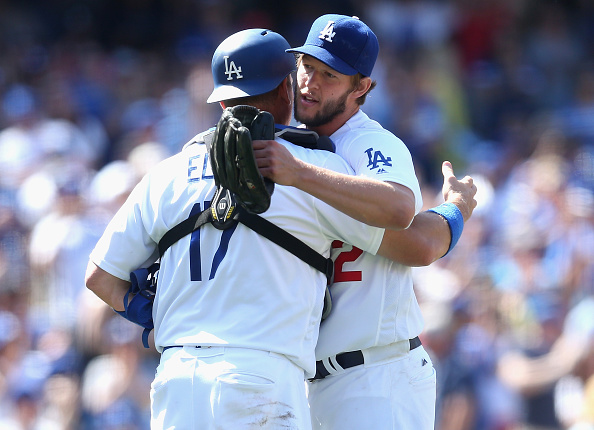 The Los Angeles Dodgers made a pretty surprising trade on Thursday, in dealing veteran catcher A.J. Ellis to the Philadelphia Phillies for another veteran catcher in Carlos Ruiz. The trade also included right-handed pitcher Tommy Bernjans and a player to be named later to the Phillies, as well as cash going to the Dodgers.

However, there is a lot more to this one, as Ellis was drafted by the Dodgers in 2003, and has been with the big-league club since 2008. And the main thing- he’s been Clayton Kershaw’s personal catcher for a long time.

So, it wasn’t just Ellis that took this news very hard, but the three-time Cy Young winner (and 2014 NL MVP) Kershaw as well:

AJ Ellis: “It’s a really sad day for me,” and added the trade “rips your heart out.” He looks crushed. Absolutely crushed.

Ellis described Kershaw as “shocked” by the trade. The two men wept together, he said.

AJ Ellis met with Clayton Kershaw in the dugout. He said was “absolutely devastated” to know he would never catch Kershaw again. — Andy McCullough (@McCulloughTimes) August 25, 2016

Ellis said he’s not angry, but he is sad and disappointed. But also grateful, honored and blessed to have been a Dodger. — Ken Gurnick (@kengurnick) August 25, 2016

Some very emotional stuff, and a reminder that professional sports can be a very cruel business. Fox Sports’ Ken Rosenthal says that the Dodgers really like the upgrade Ruiz gives them vs left-handed pitching — Yasmani Grandal is the starting catcher — and that Ruiz has similar veteran leadership qualities to Ellis:

What Ruiz doesn’t have is the relationship with Kershaw, of course.

Dodgers President of Baseball Operations Andrew Friedman explained more on why the Dodgers made the trade, and said how he didn’t consult with players before the move:

Friedman on why he didn’t consult with players prior to trading Ellis: https://t.co/njLbWMou7n — J.P. Hoornstra (@jphoornstra) August 25, 2016

The Dodgers have been red-hot while Clayton Kershaw has been on the disabled list, currently owning a 71-55 record and three-game lead over the San Francisco Giants in the NL West. Kershaw hopes to return in the next few weeks, and hopes to keep up the amazing success that he had with Ellis, with Grandal and Ruiz.