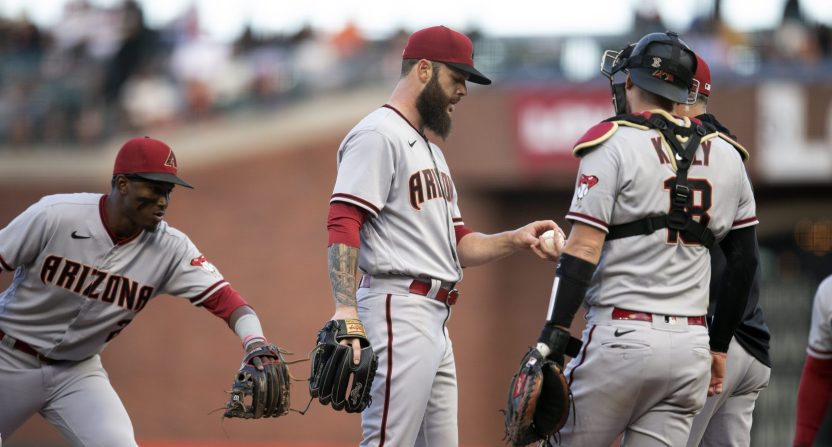 Any hopes that a quality start in his last outing might have sparked a resurgence for former Cy Young Award winner Dallas Keuchel were dashed on Tuesday.

Keuchel took the ball for the Arizona Diamondbacks against the San Francisco Giants and was sent to an early shower. He lasted 2 1/3 innings, allowed seven earned runs (eight total), surrendered eight hits, walked one, and struck out four. He did pitch into some bad luck when right fielder Jake McCarthy misplayed a potential inning-ending flyout. While not ruled an error, McCarthy’s miscue allowed two runs to score and a third scored on the play following a throwing error from Sergio Alcantara.

But even that misplay came on a well-hit ball, which was a theme of Keuchel’s outing. Five of the eight hits that Keuchel allowed were extra-base hits and three were home runs.

Sent to the Estradasphere ☄️ pic.twitter.com/IdQLknnlIB

Who’s Keuchel throwing to in the #HomeRunDerby?

Keuchel continues to be a historically amazing fade

Dallas Keuchel is so cooked that Gordon Ramsey is screaming at a chef about it.

Why is Dallas Keuchel still in the majors?

The 2022 season has been a miserable one for Keuchel. In eight starts for the Chicago White Sox, he had a 7.88 ERA and 2.16 WHIP, which led to him getting designated for assignment. Things have only been worse for Keuchel since signing with the Diamondbacks. In four starts with Arizona, he has a 9.64 ERA and 1.82 WHIP. Between the White Sox and Diamondbacks, Keuchel has an 8.53 ERA and 2.03 WHIP.

In terms of what he’s throwing, Keuchel bears no resemblance to the guy who was one of baseball’s best pitchers in the latter half of the 2010s.

It feels like overkill to say this, but this should be Keuchel’s last start as a DBack, maybe even as a major league pitcher

Time will tell if Tuesday will be Keuchel’s last start with Arizona. But if it’s not, it’s hard to imagine the Diamondbacks putting up with too many more similar outings before looking for other options to round out the rotation.