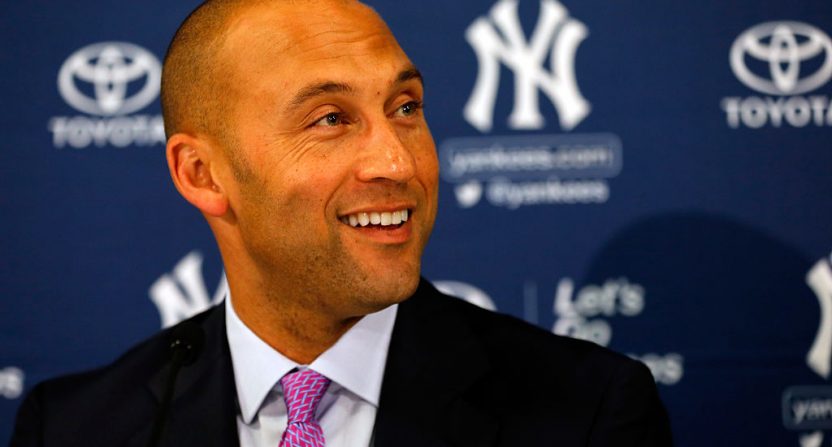 If you are a Marlins fan, you have had many reasons to dislike owner Jeffrey Loria, but one stands out above the others: He was consistently unwilling to raise the team’s payroll and invest in his roster. When he did open his wallet (such as when he signed Jose Reyes, Mark Buehrle and Heath Bell before the 2012 season), he tended to cut bait at the first opportunity. Even when he signed Giancarlo Stanton to the largest contract in baseball history, the deal was backloaded, with a player opt-out Stanton was always likely to exercise.

Loria is now on his way out, having sold the team to a group led by Derek Jeter and businessman Bruce Sherman. So will the new owners change the Marlins’ direction and turn the franchise into big spenders?

The Miami Herald reports that Jeter, Sherman and company actually plan to slash payroll quite dramatically.

In fact, a potential investor who was specifically briefed by the Bruce Sherman/Jeter group this summer said they spoke of a payroll being pulled back from $115 million to potentially as low as $55 million (if Giancarlo Stanton is traded) or $80 million to $85 million if Stanton is retained at $25 million next season.

Whether those numbers have changed since the investor was briefed is unclear, because those conversations happened before the Marlins surged back into wild card contention in recent weeks.

Now, we should note that this information comes second-hand and that even the Herald cautions it might be outdated. But it sounds safe to say that Jeter and Sherman will not be running a $150 million payroll. To be fair, the new Marlins owners are in a tough position. Reliably poor attendance had led to low stadium revenues, and the team is locked into a below-market television deal, reportedly the worst in baseball, for the next few years. Additionally, the Herald reports that Sherman, a billionaire who paid $400 million of the team’s $1.2 billion price tag, is short on liquid capital, which will make it tough for him to run a high payroll.

But if the Marlins are really serious about cutting back so dramatically, they’re basically giving up on making the playoffs anytime soon. According to Sportrac, Miami has almost $100 million in salary commitments for 2018 and $86.65 million for 2019. And that’s before factoring in potential extensions for Marcell Ozuna and J.T. Realmuto. In order to get payroll where they reportedly want it to be, the Marlins would probably have to salary-dump some combination of Martin Prado, Dee Gordon and Wei Yin Chen, then replace those guys with players making the league minimum, while essentially sitting out free agency. A middling farm system won’t help the cause.

In effect, if the Marlins’ new owners really want to shed payroll, their choices are 1.) build a consistently mediocre team around Stanton or 2.) trade their best player (plus maybe Ozuna and Christian Yelich) and begin a full-scare rebuild that will take half a decade to show results, if they’re lucky.

Buckle up, Marlins fans. Jeffrey Loria is gone, but things don’t seem to be getting any sunnier.