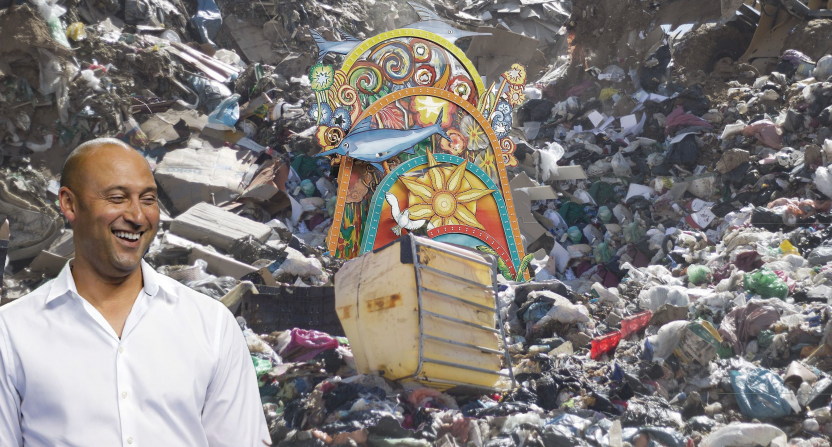 Derek Jeter will be remembered in New York as a clutch champion who never let his fans down. In Miami, however, he’s off to a pretty bad start.

Jeter seemed to have two goals when he took over as co-owner of the Miami Marlins. One, to purge the roster and attempt to rebuild from the ashes. Two, to get rid of the gaudy and glorious home run sculpture in center field at Marlins Park.

The iconic only-in-Miami artwork was designed by Red Grooms and budgeted at $2.5 million thanks to funding provided by the Miami-Dade County Art in Public Places department. Standing between 65 and 75 feet tall, it’s impossible to miss thanks to splashes of bright pink, aqua, orange, and blue colors. And then there are the animals and other items, a melange of clouds, flamingos, seagulls, and palm trees. All of which jumps, whirls, and lights up whenever the Marlins hit a home run. It was designed specifically for its place in center field and the artist said he would disavow it, thereby rendering it worthless in art circles, if it was ever moved.

While initially controversial, the artwork has taken on a cult appreciation and has come to make the ballpark seem rather unique and playful.

BREAKING: Derek Jeter gets his wish: The Marlins home-run sculpture is outta there. https://t.co/eZBBaZ0QGT pic.twitter.com/qSWaZX6Fa2

Enter Derek Jeter, who is not unique or playful, but rather an 80-year-old curmudgeon disguised in the body of a 44-year-old. Jeter has been pushing to get rid of the sculpture for over a year. He finally got his wish, according to the Miami Herald, as the Art in Public Places board of Miami-Dade County unanimously voted to relocate the sculpture to a new location outside the stadium.

In its new location, the sculpture will still whirl after home runs as well as after every home win. It will also active every day at 3:05 p.m. in honor of Miami’s original area code (305).

As for concerns about Grooms disavowing the sculpture, the Marlins had to promise the county to pay $2.5 million to them if the artist makes good on his threat.  No word yet on whether or not he will.

This sculpture is a work of art by Red Grooms. Beauty is subjective but to discard this work is so small-minded. Baseball is middle school, and Grooms’ work was deemed uncool. Art dealer Jeffrey Loria, for his flaws, knew what he was doing here. Ugh ugh ugh https://t.co/IKO5Fg633Y

Just in case you were wondering if Jeter’s true intention was because of a critical eye about the merits of public art, that’s not the real reason he wanted the sculpture gone. The real reason he and his fellow owners wanted it gone is so they could turn center field into a moneymaker. The plan is to build a “multi-story spectator area there designed for a new standing-room-only ticket that will sell for as little as $10.”

As for when this besmirchment of all that is good and just will happen, that remains unclear. Chip Bowers, president of business operations for the Marlins, told the art board that while the team plans to dismantle and move the sculpture ASAP, they’ll need to clear space outside the stadium for it first. He added that “we’d be hard-pressed to get it there by Opening Day,” so at least we’ll all be able to appreciate Homer as it was intended for a little while longer.

1 thought on “Derek Jeter, who is bad, gets his wish to remove the Marlins home run sculpture, which is good”