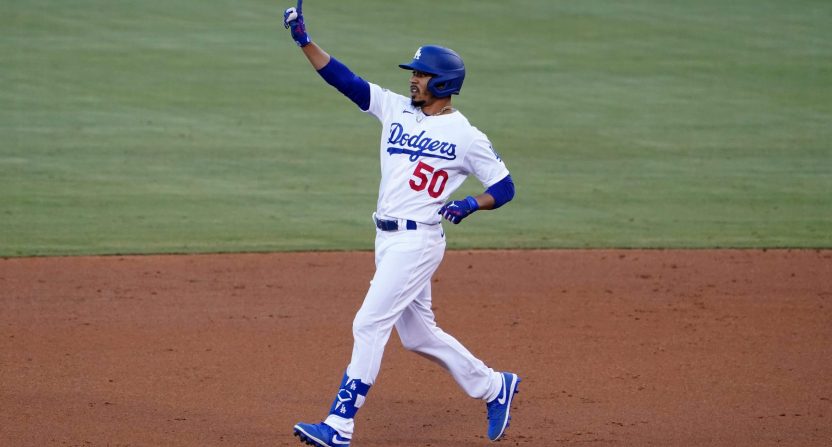 The Los Angeles Dodgers reportedly have agreed to an enormous contract extension with arguably the second-best player in baseball.

ESPN’s Jeff Passan reports that the Dodgers and outfielder Mookie Betts have agreed to a 12-year, $365 million extension. If we include Betts’ current one-year, $27 million deal, it’s a 13-year, $392 million contract in total.

Outfielder Mookie Betts and the Los Angeles Dodgers are in agreement on a 12-year, $365 million contract extension, sources familiar with the deal tell ESPN. Combined with the one-year, $27 million deal he’s currently under, the total is 13 years and $392 million.

Mookie Betts’ deal with the Dodgers adds $365 million in new money, topping the previous extension record of $360 million signed by Mike Trout, and will run through the 2032 season, sources tell ESPN. It also includes a record $65 million signing bonus.

The $365 million tops the money for Mike Trout’s extension with the Los Angeles Angels, which was $360 million (for 10 years).

The new money for Betts is technically more than the new money in Mike Trout’s extension, which was $360M/10 years. Trout’s total value, including the two years remaining on his previous deal, was $426.5M/12 years. Betts signed through age 39 season, Trout through age 38. https://t.co/PlylbvoysM

The Dodgers acquired Betts from the Boston Red Sox in a blockbuster three-team trade in February, and were surely frustrated about the idea of potentially only having Betts for 60 games, with Betts set to hit free agency after the shortened 2020 season. Well, the Dodgers no longer have to worry about that.

But, goodness, the price the Dodgers paid to make it happen, *during a pandemic*, is absolutely stunning. Yes, MLB owners are still very rich and don’t let them try to tell you otherwise, but the expectation has been that the COVID-19 pandemic — and likely not being able to sell tickets this season — would have a big impact on the market over the next year or two.

A common theory among others in the industry is that the LAD deal with Mookie Betts is so outsized in the face of financial uncertainty that the talks must've been well down the tracks, with a general understanding predating the COVID-19 shutdown. A great, great deal for Betts.

Key question being asked around the game: When did Dodgers reach agreement with Betts? If recently, contract does not acknowledge any shift in market due to pandemic. But if it was in spring – and parties were talking then – monster numbers would reflect market as it was then.

If Dodgers indeed struck deal with Betts in spring, they could not have backed out without torching relationship. Fair to ask why news didn’t leak sooner – transaction freeze ended on June 26, nearly a month ago. Then again, perhaps parties wanted to make sure season would begin. https://t.co/Anhkvm3LVn

Otherwise, it’s questionable to sign Betts to this contract now, when he possibly could’ve been had for a bit less — potentially a lot less — next offseason on the open market. While the Betts contract may suggest that, “Hey, maybe all of these rich owners will indeed keep acting rich even after losing some money during the pandemic,” that’s unlikely to be the reality. The amount of organizations willing to hand out big contracts by this winter is likely very small, and especially when talking contracts over $300 million. This contract is more likely just a juggernaut, massively-resourced organization acting as such, and — unfortunately for the players — should not be used as an example of how the upcoming free-agent market will go.

But if you can easily afford it like the Dodgers can, there’s value in just getting the player locked up as soon as possible. It’s a morale boost for everybody involved, and the Dodgers now know they have two of baseball’s best players under team control for several seasons in Betts and Cody Bellinger (he’ll be a free agent ahead of the 2024 season).

And while you never know when it comes to mega long-term contracts, Betts is unlikely to be a “bust” with this deal.

Betts is still young at 27 years old, and he put together 10.6 Wins Above Replacement (per Baseball Reference) in 2018, a higher WAR than Mike Trout has ever had in a single season. While Betts may not repeat a season like that again, he’s still annually a star player who brings value in so many different ways- he slugs, he hits for average, he takes walks, he doesn’t strike out much, he has speed and is one of the best baserunners in baseball, and he’s an elite defender in right field. Even if he declines in an area or two over time, he does so many things well that he’s still likely to be a very valuable ballplayer well into his 30s.

The Dodgers have been the team to beat in the NL West for many years, winning seven straight division titles. This signing would suggest that things won’t really change on that front anytime soon. The Dodgers should remain a juggernaut for a long while.