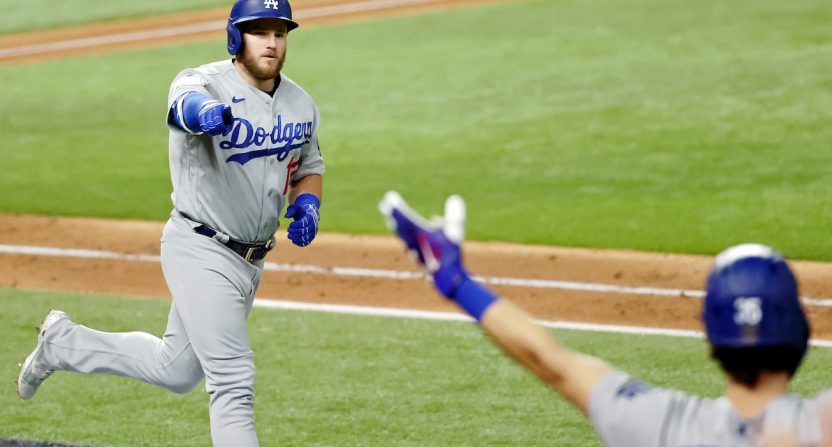 How would the Los Angeles Dodgers respond to letting Game 4 of the World Series slip away? Suffering one of the most improbable losses in postseason history had to linger into Game 5, right?

But the Dodgers jumped on Tampa Bay Rays starter Tyler Glasnow right away. Mookie Betts led off with a double and Corey Seager drove him in for a 1-0 lead. Just like that, Game 4 was in the distance.

Glasnow didn’t help himself with shaky mechanics leading to control difficulties. When he had to throw a strike, the Dodgers didn’t miss. That included Joc Pederson, who added a home run in the second to increase the margin to 3-0.

Clayton Kershaw wasn’t as dominant as in his Game 1 start, and the Rays scored two runs in the third to cut the margin to one run. But Tampa Bay probably blew its best chance to tie the score or take the lead in the fourth.

Kershaw walked Manuel Margot and Hunter Renfroe to begin the inning, and a fielding error by Chris Taylor gave the Rays runners on first and third with no outs. But Joey Wendle popped out and Willy Adames struck out, putting Tampa Bay in danger of squandering a scoring opportunity.

That compelled Margot to force the issue and take a big chance. With Kershaw’s long delivery (and his back to third base as a left-handed pitcher), Margot decided to try and steal home. Steal home? In the World Series?

Rays try to steal home! It… didn't work. But Manuel Margot made it close! pic.twitter.com/ZdwpE1U8k2

Well… no. But it was close. Margot got a great jump, but Kershaw threw a quick pitch without committing a balk, and Austin Barnes got a tag down just in time. The steal attempt was a bold risk that nearly paid off.

Dodgers manager Dave Roberts nearly put Kershaw in a position to fail again, letting him face the Rays’ lineup for a third time in the sixth inning. Was Roberts going to leave his longtime ace in a game too long again?

But Randy Arozarena and Brandon Lowe bailed Kershaw out by each making outs on the first pitch. Roberts smartly brought Dustin May in the game before Kershaw threw another strike that could cause damage.

Max Muncy effectively put the game away by crushing a fifth-inning homer and showing that the Dodgers hadn’t lost any confidence after Game 4’s heartbreaking loss. They weren’t going to sulk. They moved on, showing what a professional, resilient team this is.

You'd watch too if you hit a ball like this. Admire your work, Max Muncy pic.twitter.com/obCwGPPqcz

The Dodgers didn’t lose the World Series Saturday night, though it may have felt like it. And on Tuesday, they have a chance to win it.

Circumstances look in the Rays’ favor for Game 6, however. Blake Snell has been Tampa Bay’s best starting pitcher in the World Series and he’ll get the nod on Tuesday. The Dodgers will likely counter with Tony Gonsolin, who probably won’t pitch more than two innings. But with a day off on Monday, Los Angeles should have a full corps of relievers ready to go.

Will that be enough to stop the Rays from extending this World Series to a Game 7? First pitch for Tuesday’s Game 6 is scheduled for 8:08 p.m. ET.