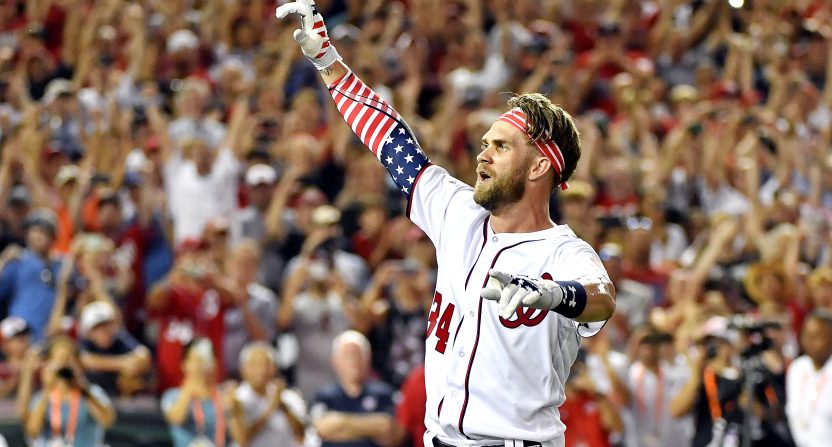 The most interesting part of the Los Angeles Dodgers’ giant trade with the Cincinnati Reds Friday may not actually be anyone involved. It’s certainly notable that Matt Kemp and Yasiel Puig are heading to Cincinnati, and that Homer Bailey is coming to Los Angeles, but the bigger implication here may be the financial savings for the Dodgers. And that has many thinking they’ll get into the sweepstakes for Bryce Harper. First, here’s the trade:

And here’s a bunch of the talk about how this might lead to Harper:

This Dodgers trade, sending Yasiel Puig and Matt Kemp to the Reds, certainly affects the Bryce Harper market. The Dodgers, tied to Harper since before the winter meetings, now have an open spot in their outfield.

Bryce Harper to the #Dodgers has a better chance of happening now than 24 hours ago. It's a long way from here to a press conference at Dodger Stadium, but the odds have improved. @MLB @MLBNetwork

That sound you hear is Scott Boras laughing as the Dodgers have opened up both a spot in the outfield and payroll room following their trade with the Reds. Let the Bryce Harper-to-the-Dodgers chatter officially begin.

You: But the Dodgers don't have room for Bryce Harper in their outfield.

You: The Dodgers don’t have the room for Bryce Harper

#Dodgers expected to DFA and release Homer Bailey once trade is completed. As I previously reported, no deal with Bryce Harper had been finalized, but team has his discussed multiple options (4, 5 and 10 years) with him.

Does this lead to Harper heading to Los Angeles? Not necessarily. There are a whole lot of teams in that competition, and just because they have a little more space now doesn’t mean that the Dodgers have him locked down. And as Yahoo’s Jeff Passan notes, the Dodgers would still wind up in luxury tax trouble if they signed Harper, but would be fine if they picked up any number of other big names. So maybe this move isn’t about Harper after all. But the chances of Harper heading to L.A. seem much higher than they did before this trade, and that’s added some more fuel to the winter hot stove.