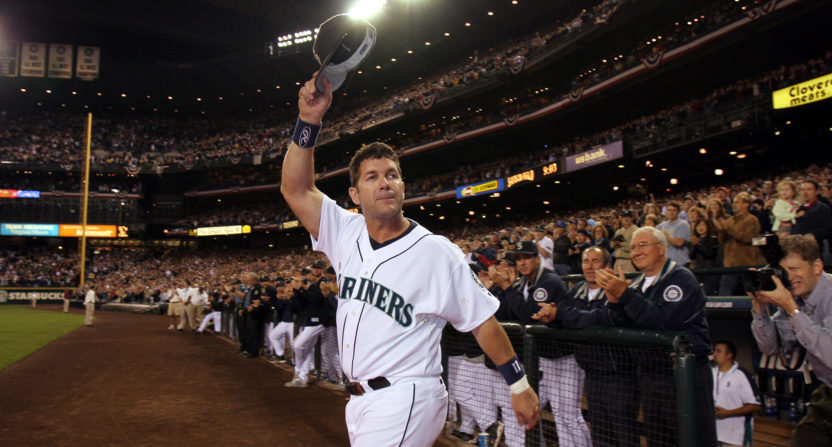 The votes are in (or at least postmarked) for the 2018 BBWAA Baseball Hall of Fame balloting, and although more public ballots will trickle in before the January 24 announcement of the results, Ryan Thibodaux’s ballot tracker has tallied more than enough votes for us to draw some conclusions.

With 159 ballots counted, or about 37.5 percent of the expected total, here’s what we have learned.

1. Cooperstown is likely to welcome a four-man BBWAA class in 2018

Though it’s too early to begin engraving plaques, four players appear destined to reach 75 percent of the BBWAA vote and join Modern Era Committee inductees Jack Morris and Alan Trammell on the Cooperstown stage next summer:

There is one more candidate with a shot at induction this year. We’ll get to him shortly.

2. Barry Bonds and Roger Clemens appear to be stalling out

Last year, arguably the biggest story in Hall voting was the rapid swell of support for Barry Bonds and Roger Clemens. But so far in this round of balloting, the steroid-tainted superstars seem to have hit a wall. Both stand just below 70 percent, but neither has netted a single new vote. Seeing as how both annually perform far worse on private ballots than public ones, they each appear headed back to the mid-50s purgatory they attained a year ago.

Joe Morgan’s letter to voters might be the most tempting explanation for Bonds and Clemens’ lack of progress, but there’s likely something else going on here: Players implicated in PED use could simply have a ceiling that won’t easily budge.

One of the reasons candidates tend to gain traction over their time on the ballot is that voters are confronted with new information. A stat about Mike Mussina or a testimonial about Larry Walker can swing a writer who’s on the fence about voting for those players. But the Bonds and Clemens arguments are so played-out and so picked-over that at this point maybe voters who have refused to vote for them simply can’t be swayed. Everyone has an opinion on steroids and the Hall of Fame and most people are loath to change their minds on the subject.

First-time voters will continue to help Bonds and Clemens (who each have four more years on the ballot after this one), but there simply might not be 75 percent of the electorate capable of coming around on them.

Last year, in his eighth round of eligibility, Larry Walker appeared on 21.9 percent of ballots. This year he’s currently at 40.3 percent, having added 23 new voters (second most of any candidate, behind only Vlad). Some of that surge likely owes to the extra spot or two on their ballots voters have after electing three candidates last year. But some of it also likely owes to greater awareness of the case modern metrics make for the former Expos and Rockies outfielder.

Obviously advanced stats didn’t just pop up in the past year. But 2017 did mark the publication of Jay Jaffe’s “Cooperstown Casebook,” which leaned heavily on Jaffe’s JAWS system and included an essay in support of Walker’s candidacy. As the book circulated and Jaffe embarked on a publicity tour, JAWS seemed to sneak into more and more Hall conversations. That has benefited Walker, who ranks as the 10th most qualified right fielder of all-time according to the metric, as well as other analytic darlings.

As younger writers gain access to Hall of Fame votes and older writers continue to look into new-age metrics, expect players who grade out well via advanced stats to perform strongly in Hall voting. JAWS is not going away.

4. Johan Santana is not getting the respect he deserves

With only 2,000 innings pitched and low counting-stat totals, Johan Santana was always going to be a long-shot for Hall of Fame induction. But it seems silly that the two-time (should-have-been three-time) Cy Young winner has received only three votes (1.9 percent) and will likely fall off the ballot after only one year.

Given his soaring peak and short career, Santana sometimes draws statistical comparison to Sandy Koufax, and although that side-by-side falls apart when you consider Koufax’s remarkable World Series record, Johan stacks up favorably with another legendary Hall of Famer with a short-lived prime.

Dean won an MVP and twice finished second (in the pre-Cy Young days), while Santana captured a pair of Cy Youngs and finished in the top 5 three other times. These two are close, but it’s tough not to conclude Santana was a bit better, relative to his era.

That comparison alone won’t get Santana to the Hall; if being better than a Hall of Famer were grounds for induction, Cooperstown would need a much bigger plaque room. But the Santana-Dean side-by-side is instructive because it illustrates how voters have previously valued players who shined bright for a short period of time. Santana may or may not deserve Hall of Fame induction, but he definitely warrants a longer stay on the ballot.

5. Edgar Martinez is headed for induction — but probably not this year

The good news for Edgar Martinez’s legion of fans is that the former Mariners designated hitter is on track for a plaque in Cooperstown. The bad news for Edgar supporters is that he will almost certainly have to wait another year to claim it.

A year after surging to 58.6 percent of the vote, Martinez has so far been named on 80.5 percent of ballots, thanks to a net gain of 17 supporters. And although that sounds promising for the hitting savant in his penultimate year of BBWAA eligibility, he is almost certain to take a tumble when private ballots are added to public ones, as he has in past years. After falling short by 73 votes last year, he’s got too much room left to make up.

That said, if Edgar can come in at, say, 68 percent of the vote this cycle, he’ll be well positioned to reach the 75-percent threshold next year, when he will likely receive a final-year boost. As is so often the case with Hall voting, patience seems to be paying for Martinez and his fans.