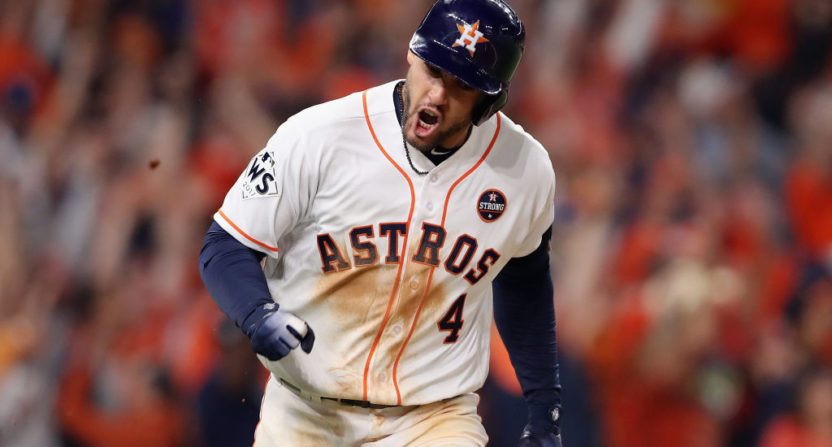 The Houston Astros are one win away from claiming their first World Championship. They’ve gotten to this point thanks to the contributions of a plethora of players, but as we head back to Los Angeles for the conclusion of the World Series, one player stands above the rest when the time comes to name a World Series MVP. That man is George Springer, the center fielder for the Astros and the catalyst for their offense this series.

Springer has been the best regular offensive player on either team in this series, slashing .333/.440/.847 with three home runs, the most of any player on either team. In fact, the only player with a better triple slash than Springer is his counterpart for the Dodgers, Joc Pederson, who is hitting .364/.462/1.091 with two homers. However, Pederson sat on the bench for all of Game 1, was double switched out of Game 2, and came off the bench into Game 5, leading to him playing less than Springer this series.

Another strong offensive candidate for the Astros is shortstop Carlos Correa, hitting .333/.364/.667 with a pair of homers and five RBI. If Correa delivers another big hit or two in Game 6 and/or Game 7, I don’t think anyone would have an issue with him being named the MVP.

The pickings for both sides are slim on the mound. Clayton Kershaw seemed like a good bet for the Dodgers, but his dud of a start in Game 5 pushed his ERA for the series to 5.40. Houston’s Game 5 starter, Dallas Keuchel, is staring at a 5.23 ERA for the series. A strong start by Justin Verlander in Game 6 could push him to the award, but his three run, six inning start in Game 2 won’t be enough to carry him to the award on its own.

The Game 6 starter for the Dodgers, Rich Hill, was pulled after just four innings in Game 2, but a similarly effective start on Tuesday night would leave his overall stats looking quite strong (four innings, one run, seven strikeouts, three walks in the first start).

I haven’t mentioned any pure relievers because of just how damn good a reliever needs to be in order to be named World Series MVP – John Wetteland won honors for the Yankees in 1996 after four saves in four appearances (also allowing a run, but hey, whatever), and Mariano Rivera took home the trophy for the 1999 Yankees following a win and two saves in three appearances. Given the shoddy performances of the bullpens in this series, the World Series MVP being a reliever is a ludicrous idea.

However, there’s one pitcher for the Astros that I didn’t mention that could have the best case for winning the MVP. Charlie Morton, who threw 6 1/3 innings of one run ball to go along with seven strikeouts and zero walks in Game 4, looks like quite a strong contender if he logs substantial innings during a potential Game 7. The Astros used a similar formula in Game 3, letting Lance McCullers go through 5 1/3 innings and having Brad Peacock take them the rest of the way home. Morton adding two or three scoreless innings in a potential clincher to his Postseason log could give him the edge, especially if the games back in Los Angeles don’t have much offense.