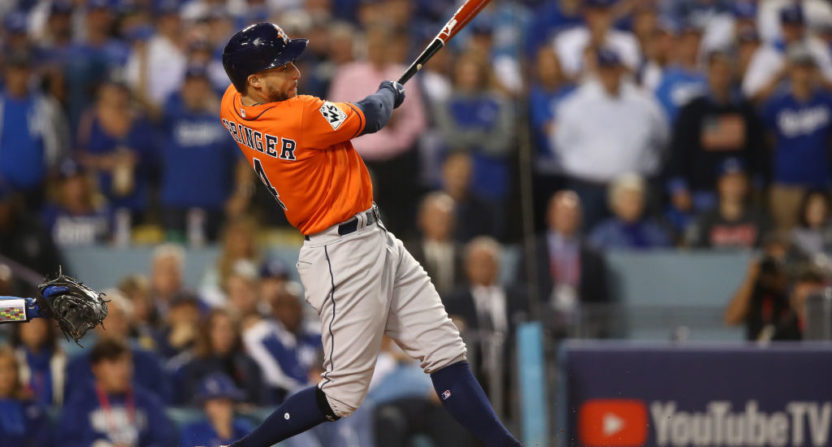 After his World Series got off to a rocky start with an 0-for-4 showing in Game 1, Houston Astros’ center fielder George Springer has been on fire. Springer was nine-for-24 entering Wednesday’s Game 7, hitting .375/.483/.958, and he’s since upped the ante even further, starting the game with a double and then hitting a two-run home run in the second. That’s given him a couple of World Series records, and very impressive ones. But first, here’s the home run:

This led to quite the reaction from Springer’s sister Lena:

I’ve never cried so much watching baseball in my life. I’m so proud of my brother man. pic.twitter.com/BmKiofduSM

I need to pull it together. There is no crying in baseball.

Fox broadcasters Joe Buck and John Smoltz later discussed all the history Springer has made:

Springer also has six postseason home runs overall, tying Lenny Dykstra’s record for playoff home runs by a leadoff hitter. But it’s his five World Series home runs that really stand out; he’s contributed a third of the Astros’ World Series record 15 home runs. That’s a remarkable showing from Springer, and one that should have him in strong contention for World Series MVP. He was already a favorite even before this, but this may put him over the top. And he’s certainly made an impressive amount of history here.