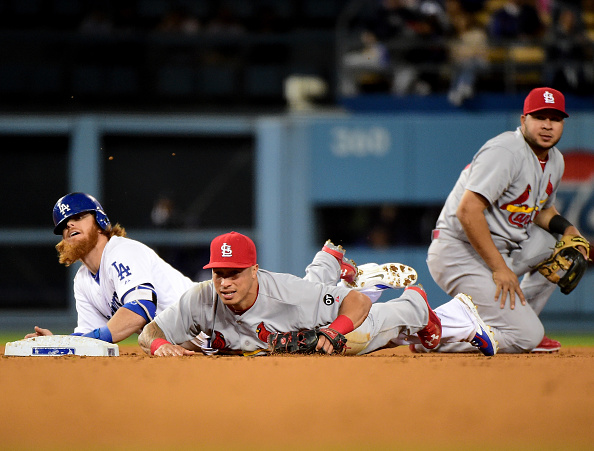 On Monday, the 2016 MLB season kicks off across the league after six teams get started on Sunday. This is looking like it’s going to be a pretty strange season. All but two American League teams look like contenders, while in the National League, half the league appears to be contenders, and the other half looks like they could all lose 90 games.

As we head into the season, why not go out on a limb and make some wild predictions for this season? Hot takes make the sports world go round these days, so we might as well jump into the fray.

Both the Cardinals and Dodgers miss the playoffs.

The Dodgers have won the NL West three seasons in a row and have finished under .500 (via an 80-82 season) just once in the past decade. The Cardinals have also won three straight division titles in the NL Central, but also made the playoffs as a Wild Card in the two seasons before their streak of division championships. Their string of above-.500 finishes is also more prolific than that of the Dodgers, finishing under .500 just once since the 2000 season.

So, how can two teams that have been so successful recently *both* miss the playoffs? For the Dodgers, it’s an issue of depth. Their starting rotation is battered by injuries. The team could start the season with no fewer than five starting pitchers (Brett Anderson, Mike Bolsinger, Brandon McCarthy, Frankie Montas, and Hyun-Jin Ryu) on the DL, and while the front office did attempt to mitigate these injury woes by signing Scott Kazmir and Kenta Maeda this winter, neither should immediately inspire confidence when placed up against the rotations that the Dodgers will be competing against in the NL West.

Furthermore, the Dodgers are also dealing with injuries of varying severity to Andre Ethier, Yasmani Grandal, and Howie Kendrick, which will require Carl Crawford, A.J. Ellis, and Chase Utley to step up for periods varying between days and months. It’s quite a tricky situation for a team that, even fully healthy, would be in a dogfight for the NL West crown.

As for the Cardinals, call it a hunch, spurred on by some competition within the NL Central. Even though St. Louis won the division crown (again) last year with 100 wins over the Pirates and Cubs, it’s not as if the gap between the three sides was massive. The Pirates won 98 games and finished two games back, while the Cubs won 97 and finished three games back. That’s a razor-thin margin, to the tune of one or two head-to-head games over the course of the season.

The Cubs obviously made improvements this offseason, including adding both Jason Heyward and John Lackey from the Cardinals. Pittsburgh didn’t make many adjustments to the side that won its third-straight NL Wild Card berth, only really adding to the back-end of their rotation and middle of their bullpen while also dealing Neil Walker to allow both Josh Harrison and Jung-ho Kang to play every day.

As for the Cardinals? Lackey was replaced in the rotation by Mike Leake, and Heyward will be replaced in right field by internal option Stephen Piscotty. They’ll also be without starter Lance Lynn all year following Tommy John surgery, and will be missing stud shortstop Jhonny Peralta for at least the season’s first month. Given the strength of the top-end of the National League, it’s certainly reasonable to envision a team winning 90+ games and getting shut out of the Postseason — and the Cardinals could be that side, considering the relative strength of the Cubs and Pirates.

Mike Trout is once again baseball’s best player, but doesn’t finish in the top three of AL MVP voting.

It’s becoming a tired narrative — Mike Trout dominates the American League, but doesn’t win the MVP. Over his first four seasons in the majors, Trout has hit .304/.397/.559 with 139 home runs and 113 stolen bases in 652 games, racking up a mind-blowing 38.5 fWAR before his 25th birthday. Yet, he has just one AL MVP and three runner-up finishes to his name, thanks to a pair of ridiculous seasons from Miguel Cabrera (including one that saw him become baseball’s first Triple Crown winner since Carl Yastrzemski) and one from Josh Donaldson that rivaled Trout in all-around dominance.

This shouldn’t matter, but Trout’s Angels have been contenders in three of his four seasons in the majors to this point, with 2013’s 78-84 campaign standing as an outlier. Perhaps coincidentally, that 2013 season saw Trout draw the least amount of support in the MVP voting, as he picked up just five first-place votes and 282 points in the balloting. This season, Trout has even less support in the Angels lineup (either a 36-year old, breaking down Albert Pujols or Kole Calhoun is their second-best hitter), and the team’s rotation is seemingly held together with bubble gum and rubber bands. Given how strong both the Rangers and Astros look in the AL West, third place looks like the ceiling for the Angels — and they could finish fourth if everything breaks right for the Mariners.

And given the projected struggles of Anaheim, voters will look to reward other players in the MVP voting, much like they did last season with Donaldson. Carlos Correa? George Springer? Mookie Betts? Michael Brantley? Lorenzo Cain? Eric Hosmer? Hell, maybe even a resurgent Cabrera again? There are plenty of players in the American League worthy of your attention, and while Trout is the best, I can envision a situation where several players from contending teams that had great seasons are voted ahead of him — just because their teams were better than Trout’s Angels. It’s probably not fair, but it’s realistic.

The American League Central was an odd division in 2015. The Royals ran away with the crown, going 95-67. They were followed by the Twins and Indians, finishing 83-79 and 81-80, respectively. In fourth and fifth were the White Sox and Tigers, who ended their seasons with records of 76-86 and 74-87. The only other division in baseball that didn’t have a 90-game loser was the AL East. Going into 2016, there’s a belief that any team can win the division, and while that’s true, that doesn’t mean the division is going to necessarily be “good.”

The Phillies don’t end up as baseball’s worst team.

Most prognostications going into the 2016 season have the Philadelphia Phillies projected as baseball’s worst team. Fangraphs? Yep. Baseball Prospectus? Uh huh. ESPN? Yessir. But not me, dammit! And really, there’s one reason for this — because the Phillies can’t really get worse as the season goes on, unlike many of the other bad teams across baseball.

The Phillies have already unloaded most of their veterans. Cole Hamels, Jonathan Papelbon, Ben Revere, Jimmy Rollins, Chase Utley? All dealt over the past year and a half. The only long-time veterans left with the team are Ryan Howard and Carlos Ruiz, who aren’t close to being the contributors that they were earlier in their careers. In the second half of 2016, it’s not as if the Phillies are going to be dumping major assets — maybe Howard and Ruiz, along with veteran starters Jeremy Hellickson and Charlie Morton (who aren’t expected to contribute much or fetch much in return).

Contrast the Phillies to some of the other teams expected to struggle this season, like the Braves, Brewers, Reds, and Rockies. All of those teams still have veterans they can move, pushing them further into the tank. Much like my argument above about the Cardinals in the NL Central, the Phillies weren’t far and away baseball’s worst team in 2015. Their 63-99 record was just one game better than Cincinnati’s 64-98 mark, and barely better than the 67-95 season put together by the Braves and the 68-94 record shared by the Athletics, Brewers, and Rockies. The Phillies aren’t measurably worse than those teams again this season, and I think the combination of the team’s youth and the veterans could deal could deal at the deadline might push Philadelphia out of the top spot in the 2017 MLB Draft order.

The state of Texas has the best winning percentage of any state with multiple teams.

We close with a prediction that may not be too much of a hot take. There are nine states (which includes the DC/Maryland/Virginia area) with multiple teams in Major League Baseball: California, Florida, Illinois, Missouri, New York, Ohio, Pennsylvania, Texas, and the aforementioned DC/Maryland/Virginia area. Of those nine states, Missouri had the best winning percentage last year at a whopping .601 for the Royals and Cardinals. New York came in second with a .546 mark, followed by Texas at .537 and Illinois at .534.

This year, I think it’s going to be the state of Texas at the top of the list. Missouri is a strong contender for the top spot once again, but as previously illustrated, I believe both the Cardinals and Royals will take a step back from their 195 combined wins last season. Illinois will be in the mix, considering the Cubs probably won’t win fewer than 94 games and the White Sox seem pretty likely to improve upon their total of 76 wins from a year ago.

That brings us to the state of Texas. Both the Rangers and Astros look like strong contenders in the AL West this season. In that division, the A’s are one of two AL teams that don’t look like contenders (along with the Royals), while both the Angels and Mariners are quite flawed and will likely end up struggling. If both Texas teams end up winning 90 games, they’ll wind up with at least a .556 winning percentage, which would have been better than all but seven teams last year. Is it possible that one state does what Missouri did last year? Sure — and I think that state will end up being Texas.