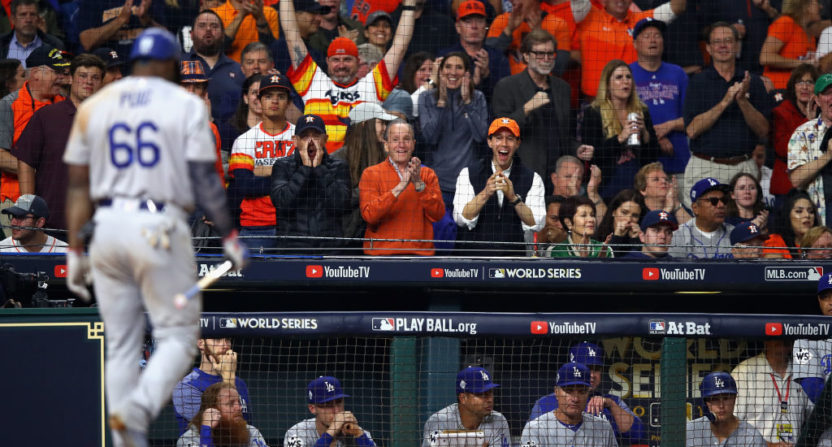 After a World Series Game 2 victory Wednesday that featured an exhausting succession of comebacks and lead changes, the Houston Astros made things easier for themselves in Friday’s Game 3.

The Astros scored four runs in the second inning off Dodgers starter Yu Darvish and held off Los Angeles from there, ultimately prevailing 5-3 to take a 2-1 lead in the best-of-seven series.

Houston’s second-inning rally showed off the unmatched lineup depth that gave A.J. Hinch’s team baseball’s best offense during the regular season. Yuli Gurriel (who later embarrassed himself and his team with a racist gesture) led off with a home run. Josh Reddick followed with a double, and Evan Gattis walked. Singles by Marwin Gonzalez and Brian McCann drove home two more runs, and a sacrifice fly from Alex Bregman brought in another. After a Jose Altuve double, Darvish exited the game with his team behind 4-0. It was the shortest start of his Major-League career and the very first time he failed to strike out a batter.

The Astros never gave back the lead, largely thanks to Brad Peacock, a starter in the regular season who became a fireman reliever Friday night. Peacock entered Game 3 in the sixth inning and shut down the Dodgers the rest of the way, allowing no hits and one walk while striking out four over 3 2/3 dominant innings.

Friday’s pitching matchup had appeared unfavorable for Houston on paper. While Darvish is known as one of baseball’s best pitchers, his opponent Lance McCullers entered as somewhat of a question mark. After spending the second half of the season hurt and/or ineffective, McCullers became an out-of-nowhere hero in the ALCS, allowing only one run in 10 innings thanks to a wicked curveball he employed devotedly. It was tough to say whether he would repeat his dominance from the previous round or revert to his shaky regular-season form.

As it turned out, McCullers was somewhere in between. Relying heavily on his curveball once again, the righty walked the bases loaded in the third inning before escaping with only one run on the board. He ran into trouble again in the sixth, giving up a walk and a double and ceding to the bullpen with one out. Peacock escaped only after an RBI groundout and a wild pitch, as the Dodgers cut their deficit to 5-3.

Los Angeles hung around largely due to its bullpen, which recovered from a poor Game 2 to concede only one unearned run in 6 1/3 innings. Dodgers relievers stranded two Astros runners apiece in the fifth, sixth and seventh inning to keep the game close despite a barrage of Houston hits (The Astros have 26 over the past two games, compared to 9 for L.A.).

But Peacock just kept retiring Dodgers hitters, ultimately inducing Yasmani Grandal to fly out to right to ice the Astros’ win and his 11-out save.

Friday’s victory puts the Astros in strong position moving forward in the series. They’ll send Charlie Morton to the mound against Alex Wood on Saturday in Houston, where they are now 7-0 this postseason. Thanks to Peacock’s performance, Hinch will have a fresh bullpen for Game 4, while his Dodgers counterpart, Dave Roberts, will have to finesse a worn-down staff. Meanwhile, Astros aces Dallas Keuchel and Justin Verlander wait for Games 5 and 6, respectively. A 2-1 lead is far from decisive, but Hinch and company have to like where they stand.