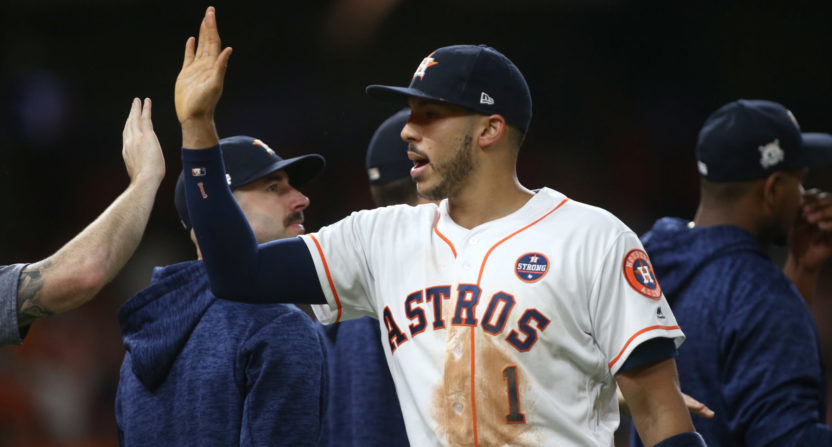 Baseball is currently awash in talented players — many of them young and already preposterously accomplished. And so we posed a simple question to our staff: Which one player, at his current age and under his current contract, would you most want to build a franchise around?

Here is what our writers came up with:

Matt Clapp:  This may be the toughest roundtable we’ve done. I view it as a near-tie between Carlos Correa, Kris Bryant, and Francisco Lindor. They’re all awesome, still young, and under team control for four more seasons before hitting free agency.

But I’ll go with Carlos Correa. The 23-year-old has already put together two 6-WAR seasons (and in only 109 games in 2017), while also being the starting shortstop for the defending world champion Astros.

And the scary thing is that Correa still has the upside to get much, much better. He’s a physical freak with the ability to become a 40-home run hitter from the shortstop position. He put up a .941 OPS in 2017, and didn’t turn 23 until the final two weeks of the regular season. We already know Correa is at least one of the top 10 position players in baseball, and there’s no reason he can’t soon become the clear No. 2 (behind Mike Trout, of course).

Ian Casselberry:  Looking around the majors, there’s one guy I wish I had on my team more than any other: Astros shortstop Carlos Correa. Just 23 years old, already with nearly three MLB seasons on his résumé. He hits for average and power, gets on base and can steal bases. No, he’s not the best defensive shortstop, according to advanced metrics like Ultimate Zone Rating. But the offensive production (.941 OPS, 5.2 WAR in an injury-shortened 2017) more than makes up for that, and it figures to get even better.

With one more season before he’s eligible for arbitration, Correa is under club control for four more years. He’ll be 28 years old when free agency comes around, on the tail end of his prime. Between his age and production, Correa might be unaffordable for many teams by the time he hits the open market. But my team will already have gotten four productive seasons out of him at a position where run production is a luxury.

Additionally, Correa can be a face of the franchise — a star player who cares about his role in the community and is proud of his roots. He’s not going to embarrass my team off the field and is someone who can strengthen the bond between the franchise and its fans. He would be a worthwhile investment across the board.

Joe Lucia:  The correct, and obvious, answer here is Mike Trout. He’s the best player in baseball, young enough (26 years old) that you can build around him, good enough right now that you won’t be in the 90-loss zone, and marketable enough that your team will have a must-see attraction.

Alex Putterman: For me, this question came down to four players: the three young stars Matt listed (Carlos Correa, Kris Bryant, Francisco Lindor), but also a fourth who is slightly younger than Bryant and Lindor, slightly more accomplished than Correa and under team control at least as long as all three.

I’m talking about Corey Seager, who finished third in MVP voting as a rookie in 2016 and would have ranked up there again in 2017 if not for nagging injuries in the final months. Seager is only 23 years old but has produced more WAR over the past two years (per FanGraphs) than all but four other players — all of whom are at least a couple years older. Meanwhile, he won’t be arbitration-eligible until 2019 or a free agent until 2022, making him a bargain for the near future. (Like the aforementioned young stars, Seager will make about 1/60 as much money in 2018 as Mike Trout and 1/12 as much as even the underpaid Jose Altuve.)

Seager may not have had the breakout playoff performances Lindor and Correa (and sort of Bryant) have had, but that’s coming. This guy is quietly one of the very best players in baseball, especially if his elbow and back injuries are fully behind him by the start of next season. There are plenty of good answers to this question, but I’m going with Seager.

Andrew Bucholtz:  For me, it’s Mike Trout. At 26 with two MVP awards and two 10-WAR seasons (funnily enough, both FanGraphs and Baseball Reference give him that, but in different seasons), Trout has been one of the most spectacular and most history-making young players ever. As Craig Edwards wrote this summer (when making the case for Trout as MVP despite him missing 39 games), “Most of the time when we talk about Mike Trout, we ask if anybody has ever done what he’s doing. Sometimes the answer is Mickey Mantle or Ty Cobb or Albert Pujols, but a lot of the time the answer is no and what Trout is doing is unprecedented.”

Trout’s overall impact really has been unprecedented, and there’s no sign it’s going to stop any time soon. Even his somewhat-down 2017 thanks to missing those games still produced a .306/.442/.629 batting line and 6.9 WAR per FanGraphs, numbers almost anyone else would love to have, and he finished fourth in AL MVP voting. Oh, and he’s under a very reasonable $24 million a year contract through 2020. Carlos Correa and Kris Bryant are other good options, but Trout seems like the best answer to me. We’re all used to his greatness by now, but that doesn’t detract from it.