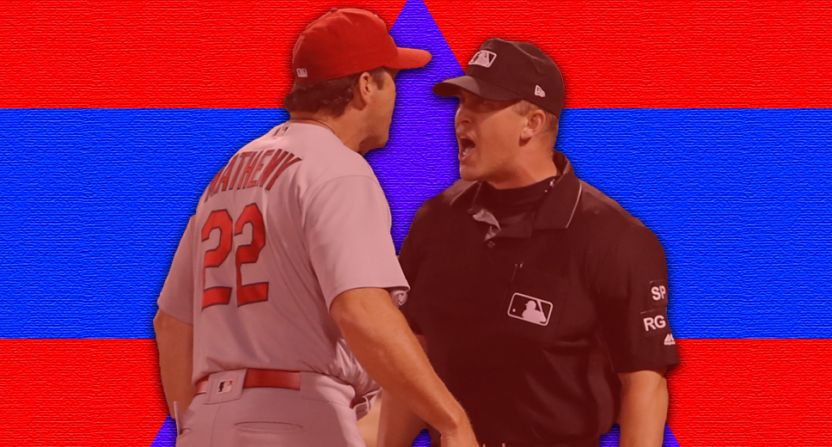 It’s an irresistible thought exercise for any baseball fan: If you were commissioner for a day, what would you do? What would be your first move, on or off the field, toward bettering the sport?

We asked our writers that question and got an interesting variety of answers. Here they are:

If you were commissioner for a day, what would you do?

Matt Clapp: Without question: ramping up the efforts for an automated strike zone.

I understand that the current tracking systems still aren’t near 100 percent accurate, but we’re making serious progress. And the fact it’s there for us to see as we follow along online with MLB Gameday or with the K-Zone on TV makes it even more maddening for fans.

While there are a few umpires who should no longer be employed by MLB, there’s not a human alive that would do anywhere close to a masterful job calling balls and strikes. It’s an insanely difficult job, especially when we’re talking so many 100-mph fastballs and 90-mph sliders these days. Especially when catchers are becoming so much better at framing pitches and deceiving the umpire.

The “human element” argument against it is particularly annoying. For one, human umpires would still be on the field, as Sports Illustrated’s Tom Verducci suggested in February:

You would still have umpires on the field — just as you still do a chair umpire in tennis despite the presence of Hawk-Eye – but for balls and strikes they would simply inform people whether the pitch passed through the automated zone.

And two, the “human element” should be human players and managers deciding the outcome of games.

Bad ball and strike calls absolutely impact games. Putting aside obvious game-changing calls, things like a bad call making a 2-1 count a 1-2 count, or a 1-2 count becoming a 2-1 count, completely change at-bats. That adds up over the course of a game.

Joe Lucia: Universal DH. For the love of god, universal DH. It’s absurd that there are different rules for the lineup based on what ballpark you’re playing in. Imagine if kickers were outlawed in NFC stadiums (but not AFC stadiums), or if there were no free throws in Western Conference arenas (but not Eastern Conference arenas). If a rule like that was passed today, it would be lambasted as ridiculous. Yet, we see this EVERY NIGHT in Major League Baseball, and no one bats an eye. It’s outrageous, egregious, preposterous and should have been changed years ago.

Andrew Bucholtz: It’s a challenging thing to do given the web of contracts involved, but my top priority as commissioner would be working towards a way to offer an in-market streaming solution to fans that could be purchased independently of a cable bundle. MLB.tv’s streaming of games outside of local blackouts is nice, as is the recent expansion of in-market streaming with authentication, but those are both targeting much smaller potential audiences. There needs to eventually be a way for in-market fans to be able to legally buy their team’s games over the top, whether that’s through getting the regional sports networks that have the in-market rights to offer an ability to buy just that channel or just selected games on that channel instead of a bundle (we’ve seen a RSN start to dip their toes in those waters with the NBA) or whether it’s through making those games available through a different subscription on the MLB.tv platform and giving the RSNs a cut of that revenue.

This is an issue faced by most sports, not just MLB, but I think it’s particularly important for MLB given their oft-stated desire to draw younger fans and given that 150-plus games from your favorite team (national broadcasts would still probably be exempt here) could be a pretty compelling content buy. And while there’s likely to be opposition to this from the RSNs, there’s enough potential money here to make it work. In-market streaming could be floated at a higher price with a cut going to those RSNs, and while some potential subscribers might balk at that, it would still probably find an audience if it’s at a price lower than a RSN-including cable bundle. There are plenty of people who want to watch their local team and don’t want a cable bundle, and those numbers are likely to continue to rise, but under the current state of affairs, there’s no legal offering for them. It’s not going to happen overnight, but if I ran MLB, my top priority would be finding a way to offer this.

Alex Putterman: To me, the biggest problem facing baseball right now is a surplus of strikeouts, which sap the sport of its action, so that’s what I would target as commissioner. If I truly had only a day, I would establish some sort of highly pedigreed committee to explore ways to lower the strikeout rate, preferably without increasing the home-run rate too drastically. If I have to figure out the answer on my own, I think the most sensible option is to ask that umpire enforce the bottom of the strike zone more strictly than they do currently. That would not only put a dent in called strikes but would also force pitchers to throw more hittable offerings.

One way or another, it is not acceptable for baseball to have more strikeouts than hits, as it has this season. The strikeout rate has to drop, and it’s the commissioner’s job to make that happen.

Jay Rigdon: While blackouts would probably be first on my list (seriously, imagine living in Iowa and trying to watch baseball on a regular basis; on the blackout map Iowa looks like a finely decorated Easter egg), it would also be the perfect time to institute a personal policy change I’ve brought up before: walks should be optional. And not just intentional walks, which no one likes or should like. Baseball’s a great sport, but it’s never fun when a star hitter is in a big spot late in the game with a base open.

In other sports, you can’t keep LeBron from taking the final shot, or Tom Brady from having the ball in his hands on the final drive. But in baseball, that is possible, and it’s already not likely, since teams can’t choose who they want to bat in the bottom of the ninth, which is a blessing and a curse. (It makes it much more of a team sport than it would otherwise be, which is the strength.) Weirdly, though, instead of looking into changing that rule (which would fundamentally alter the sport, so of course Rob Manfred was reportedly considering it), the walk would still be a thing.

So why not make them optional? That is, why should the batter have to take first base after four balls if he doesn’t want to? It’s theoretically an offensive advantage, but if there are situations where the pitching team thinks it’s advantageous to avoid pitching to the batter, then the rule isn’t working as designed. And not just intentional walks, of course, because teams could pitch around at that point; any walk at all should be optional. If the pitcher wants to wear himself out throwing ball after ball, that’s on the pitcher. Essentially, if there’s a three-ball count, a fourth ball is effectively not a pitch if the batter doesn’t want to accept the walk, and things continue.

It’s another strategic decision to argue about, and it’s a way to maximize the moments when the best players have a chance to do something special.

8 thoughts on “If you were MLB commissioner for a day…”