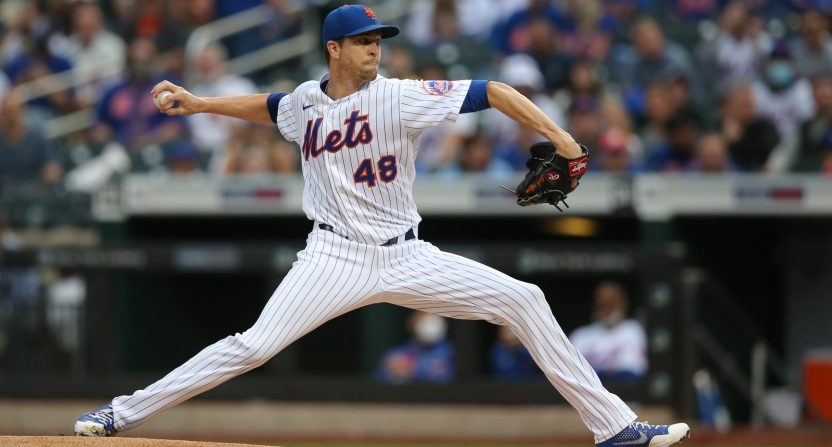 The New York Mets let the NL East slip away down the stretch, riling their fan base.

Now, those miffed fans are trying to make sense of the latest news — the Mets reportedly want to avoid using arguably their best player, ace Jacob deGrom, in the Wild Card Series that opens Friday against the San Diego Padres.

The New York Post reported Wednesday that the Mets are considering a plan that would see Max Scherzer start Game 1 against the Padres, and, if they win, Chris Bassitt would start Game 2 Saturday.  If they lose Game 2, deGrom would by necessity start the third and final game of the series.

But if they win, they’d then advance to face the Los Angeles Dodgers in the NLDS, and deGrom would be available to make two starts in the best-of-five series.

It’s a bold plan, to be sure, trying to win a series without using the two-time Cy Young Award winner. Showalter actually employed this type of strategy a few years ago — with disastrous results. As manager of the Baltimore Orioles in 2016, he did not use ace closer Zach Britton in the Wild Card Game against the Toronto Blue Jays. Edwin Encarnación ended up hitting a walk-off three-run homer off Orioles reliever Ubaldo Jiménez in the 11th inning.

However, as manager of the New York Yankees, Showalter used a similar strategy in saving ace David Cone for a potential elimination game late in the 1995 season, and that gamble paid off.

This is, at best, too cute by half. Win the Wild Card series then figure out the LCS. https://t.co/bnLHg2raTM

If I believed in bulletin-board material, skipping deGrom would qualify for Padres. https://t.co/iI41TvIfyD

I'm sure this won't backfire. The Mets have earned our trust. https://t.co/khTZUsoJ12

This is exactly what I expected out of NY. They don't want to leave 3 games of the LDS up to guys not named deGrom & Scherzer. It's interesting. But awful if you lose G2 of the WC round 9-7, but then get shutout in G3 2-0.

I'm a Braves fan but I think this is smart. You have to trust a pitcher other than Scherzer or DeGrom to win a game anyways and I would trust it to happen against the Padres over the Dodgers

OTD 6 years ago, Edwin Encarnacion made Buck Showalter pay for not using Zack Britton, delivering one of the biggest walk-offs in #BlueJays history.

This weekend is going to be special at the Rogers Centre. pic.twitter.com/SAjbXG1Soa