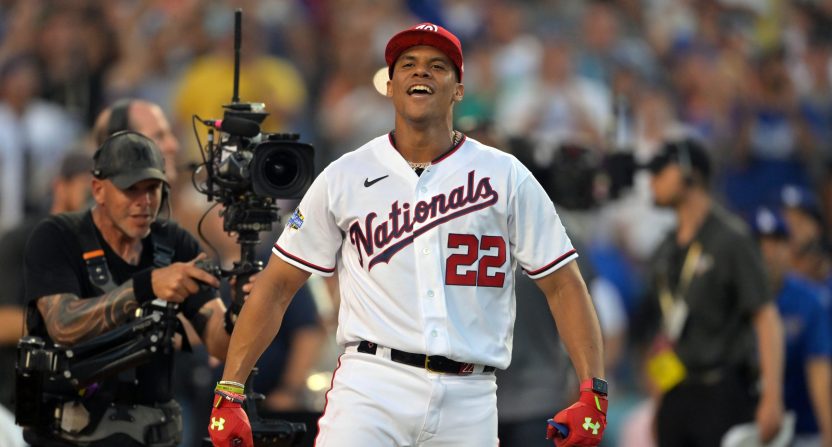 What do Oakland Athletics pitcher Paul Blackburn and Washington Nationals outfielder Juan Soto have in common? Both are 2022 All-Stars and play for teams that apparently look to save a few bucks on travel expenses.

On Monday, Blackburn shared that he was going to fly to the All-Star Game in Los Angeles commercial but was offered instead to fly with the Houston Astros, as his Athletics were in Houston immediately in the series before the All-Star Break. While having an All-Star fly commercial seemed like a uniquely A’s story, that’s not the case. The Nationals did the same thing with Soto. And while Blackburn eventually found his way onto a charter plane, Soto did not.

Contained within: a whole new level of cheapskate behavior on the part of Nationals ownership https://t.co/EcNw6opegU pic.twitter.com/hlGtLYWTBS

Baseball fans tore into the Nationals for making one of baseball’s best players fly across the country on a commercial flight.

Nats have Soto on spirit airlines to get to the ASG lmfao come on https://t.co/WOd8Z6Q5iP

Soto got the Oakland As @athletics treatment from the Nationals. @Nationals

Soto & Boras should have called the @astros for a ride #LevelUp https://t.co/N6wJD2YGmd

The Lerners didn’t charter a PJ for its superstar? This is a TERRIBLE look. https://t.co/IN066lArAM

nationals and athletics ownership should be launched to the sun 🗣 https://t.co/DuDZWA84Gu

We get on the Nationals for "Natitude" and all of that but frankly, Nationals fans deserve better than this ownership. https://t.co/TMNVsiH2jG

Can't pay for a chartered flight with deferred payments https://t.co/DMBicgJ6gf

the nationals are an unserious franchise and always have been https://t.co/FGeRYGyqOC

This puts Soto’s reported trade request in a different light. It also makes his victory at the Home Run Derby look even more impressive.

As was the case with Blackburn, there are two ways of looking at this.

The defense of the team (in this case, the Nationals) is that it’s environmentally responsible. Chartering a plane for one All-Star seems outrageous. Major League Baseball could easily have teams share a chartered plane from the final first-half series to the All-Star Game.

This kind of thing gets noticed around the league. Is it a dealbreaker? Probably not. If the Nationals are bidding on a free agent and have by far the best offer, the free agent will probably still sign in Washington and worry about flights to the All-Star Game later. But if two deals are close, this is not the kind of thing that will help the Nationals.