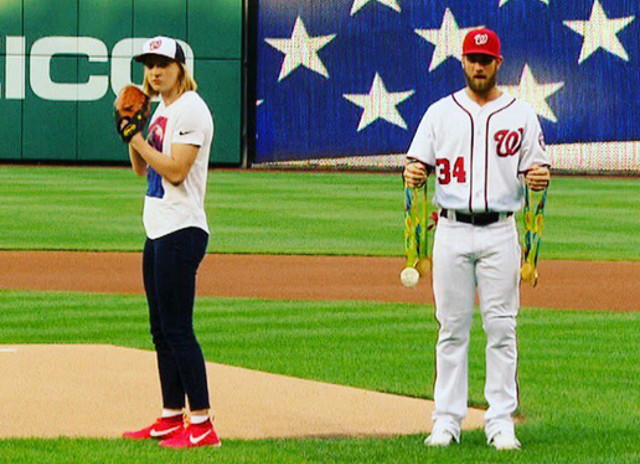 As a Washington D.C.-area native, it only seemed natural for the Washington Nationals to honor U.S. swimmer Katie Ledecky following her stellar performance at the 2016 Olympics in Rio.

So, on Wednesday, Ledecky was back in D.C. to throw out the first pitch prior to the Nationals’ game against the Baltimore Orioles. The U.S. swimmer said she practiced, and it showed. She delivered a strike. But the best part had to be her interaction with Washington outfielder Bryce Harper.

Walking out onto the field, Ledecky showed off all of her gold medals she received in Rio. Man, does that look heavy or what?

Olympic star and Bethesda native Katie Ledecky is here to throw out the first pitch. She said she's been practicing. pic.twitter.com/nf2XxE3t9H

Once Ledecky got to the mound, she had to do something with all of that hardware. Thankfully, Harper was there to lend Ledecky a hand.

When you have too many Olympic medals so you have to ask the MVP to hold them while you throw out the first pitch. pic.twitter.com/m6w8l02m5n

The picture spread like wildfire throughout Twitter and other platforms. With all of the weight of the medals gone, Ledecky delivered a quality first pitch.

It was no Jim Harbaugh first pitch, but it’s easy to see that Ledecky has had some experience throwing a baseball. Following the pitch, Ledecky thanked Harper via Twitter for assisting her.

Great time at the @Nationals game tonight! Thanks @Bharper3407 for the hand! https://t.co/9slpK6YC0g pic.twitter.com/dw3Be5pDvJ

As the 2015 National League MVP, it’s hard to imagine that Harper is asked to hold things for someone else very often. However, when you’re standing next to one of the most impressive Olympians of all time, you probably have to do what she says. Even if she’s only 19.