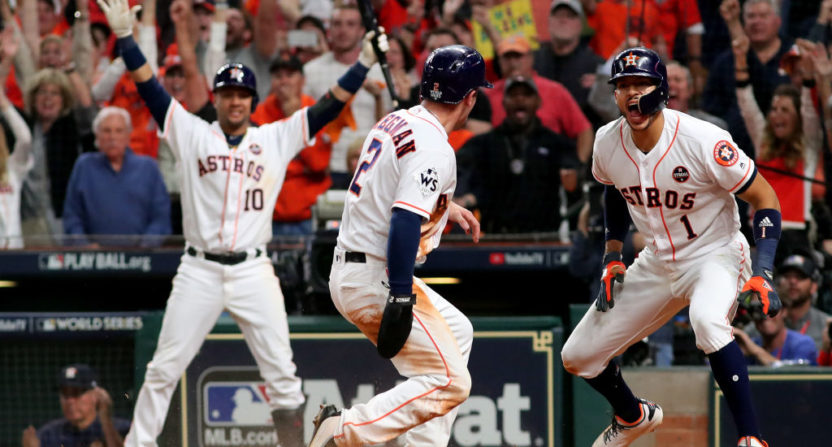 Don’t get me wrong. The Astros are amazing and deserve a ton of credit for winning an instant classic Sunday night in Houston. In one of the best World Series games in recent memory (and maybe all-time), Alex Bregman’s walk-off single in the 10th inning gave the Astros a 13-12 win and a 3-2 lead in the World Series.

Much will be made of the back-and-forth nature of the game. It took more than five hours and ended past midnight local time. The two teams combined for 24 hits and eight home runs. The top five hitters in Houston’s lineup — Springer, Bregman, Altuve, Correa and Gurriel — went 12-for-23 with 12 RBI.

That all deserves attention, but this was a game the Dodgers should’ve won. They staked Clayton Kershaw to leads of four and three runs. The greatest pitcher of our generation once again scuffled on a big stage, allowing six runs and not making it through five innings.

The Dodgers didn’t need a great start from Kershaw. A good start would’ve sufficed. A quality start likely would’ve resulted in the Dodgers taking a 3-2 series lead back to Los Angeles.

After a gem in Game 1, things were set up perfectly for Kershaw Sunday. The Dodgers scored three in the first inning and added another in the top of the fourth to make it 4-0. Kershaw had cruised through the first three innings, but lost his command in the fourth. A Carlos Correa double put the Astros on the board, and Yuli Gurriel knotted the game at four with a no-doubt home run.

It looked like the bad inning might just be a blip on the radar for Kershaw and the Dodgers. In the fifth, Cody Bellinger put the Dodgers on top 7-4 with a home run to continue his World Series turnaround.

The lead was short-lived, as Kershaw again struggled in the bottom of the inning. With two outs, he walked two batters and was pulled in favor of Kenta Maeda. José Altuve welcomed Maeda with a game-tying three-run home run.

We have run out of things to say about @JoseAltuve27. #WorldSeries pic.twitter.com/unwtJaxPpT

Maeda, like the rest of the Dodger bullpen, struggled on Sunday. What had been a strong spot for the Dodgers has become a weak link. Dave Roberts has leaned hard on his bullpen, and we’re finally seeing the downside of that strategy.

Brandon Morrow was the next previously dominant reliever to run into trouble for the Dodgers. The setup man was initially supposed to be unavailable Sunday, but he wound up pitching for a third-straight night and the fifth time in six days.

Morrow immediately coughed up an 8-7 lead for the Dodgers, the team’s third lead of the contest. The Astros took their first lead of the game two batters later on an Altuve double. Carlos Correa knocked Morrow out of the game with a 328-foot home run into the Crawford Boxes.

As was the case in Game 2, the Dodgers fought hard before ultimately losing. Down three in the ninth, Los Angeles cut the deficit to one with Yasiel Puig’s second home run of the World Series. Austin Barnes followed with a double to put the tying run into scoring position, and Chris Taylor ensured there would be a bottom of the ninth with a single up the middle.

The Dodgers did well to stay alive, but were forced to turn the ball over to another tired reliever in Kenley Jansen. Arguably the best closer in the regular season, Jansen would give up a run for a third-straight game. Yuli Gurriel nearly walked it off in the bottom of the ninth, but Jansen was able to work around the double to force extras.

Jansen was not as fortunate in the tenth inning. With two outs, he hit Brian McCann and walked George Springer. Alex Bregman came up with another big hit, roping the game-winning single to finish off a wild 13-12 win for Houston.

What were you doing at 23? @ABREG_1 is doing THIS. #WorldSeries pic.twitter.com/FS3u4XxTJw

The Astros deserve a ton of credit for coming out on top in an incredible game, but it’s the second time in this series Los Angeles has squandered a winnable game. In Game 2, the Dodgers had Jansen on the mound with a ninth-inning lead in what we thought was the best game of the series.

Game 5 might have been even better, but the Dodgers won’t see it that way. They lost a game in which they held three separate leads and had Clayton Kershaw on the mound. The team’s seemingly invincible bullpen looks totally gassed.

Houston is now a win away from a World Series title heading into Game 6 Tuesday in Los Angeles. If the Dodgers don’t come back and win two more games, we’re in for another offseason of Clayton Kershaw playoff takes.