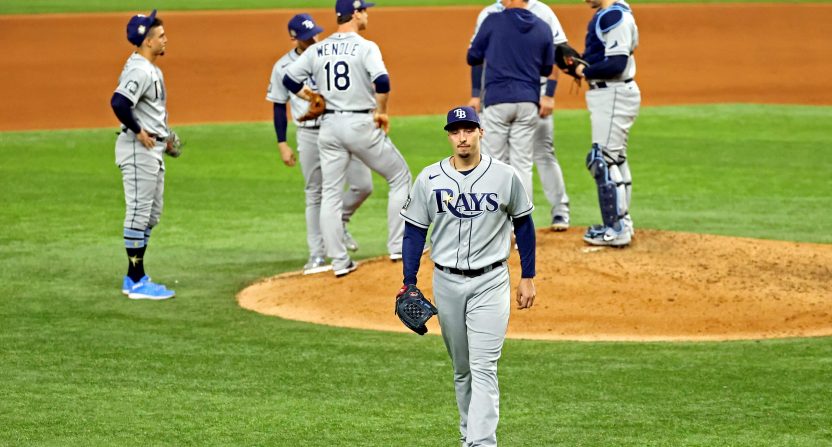 Tampa Bay Rays ace Blake Snell was cruising in Game 6 of the World Series, with his team in need of a win over the Los Angeles Dodgers to force a Game 7. Snell entered the bottom of the sixth with the Rays leading 1-0. He had allowed zero runs, one hit, and zero walks, while striking out nine. The first Dodgers batter of the sixth inning, AJ Pollock, popped out. The next batter, Austin Barnes, singled to center field.

And then Snell was taken out of the game, at 73 pitches. This is the kind of thing manager Kevin Cash and the Rays have done all season, mixing up matchups, relying on their bullpen frequently, preventing starters from facing a lineup the third time through, etc. This is an organization that has relied heavily on analytics, and with remarkable success.

The Dodgers' lineup is turning over. Rays manager Kevin Cash will not let them see Snell for a third time. Nick Anderson is in. Snell is out after 73 pitches. He was absolutely brilliant.

This is the Rays' process. It got them here, and they're not going to abandon it.

I know this is "how the Rays do things". But if I were Blake Snell right now, I'd have to be restrained.

Reactions around MLB to Blake Snell being pulled in the 6th inning. pic.twitter.com/qCyvZ20O7q

But this was the 2018 AL Cy Young Award winner dominating in a must-win game, with seemingly plenty left in the tank, and with no game to save him for. There’s a point where feel and what the eyes tell you outweigh your traditional pitching usage and the spreadsheet.  It’s hard to buy that the Rays’ relievers gave the team a better chance than Snell for *at least* the rest of the sixth inning.

Well, Nick Anderson came out of the bullpen to face Mookie Betts, who Snell had struck out in both of the previous plate appearances. Anderson fell behind 2-0, and Betts then ripped a double down the left field line to put runners on second and third with one out.

Nick Anderson: 1 fastball, 1 put in play (for a double)

Two pitches later, Anderson threw a wild pitch, allowing the tying run to score and the go-ahead run to advance to third.

The Rays make the questionable decision to pull a cruising Blake Snell at 73 pitches. And it's not going well for them.

And on the pitch after that, Seager hit a groundball that scored Mookie Betts to give the Dodgers a 2-1 lead.

And that's immediately followed by a Corey Seager groundball that scores Mookie Betts. The Dodgers take a 2-1 lead. #WorldSeries pic.twitter.com/VCWqYPkWwe

So, just two batters after Snell was pulled from his brilliant performance, the Rays trailed 2-1.

Nick Anderson has allowed at least 1 run in 8 of 10 postseason appearances this year.

Anderson allowed at least 1 run in 1 of 19 regular season appearances this year.

The Rays' removal of Blake Snell will be used as some indictment of analytics. That's wrong. Analytics are good and only make you smarter.

But analytics are meant to guide decisions, not force them. Managers must use discretion, too. Kevin Cash made a mistake.

If the Rays are unable to come back in this game, Cash is going to get a lot of blame for the season-ending loss. It will go down as possibly the most questioned decision in World Series history.