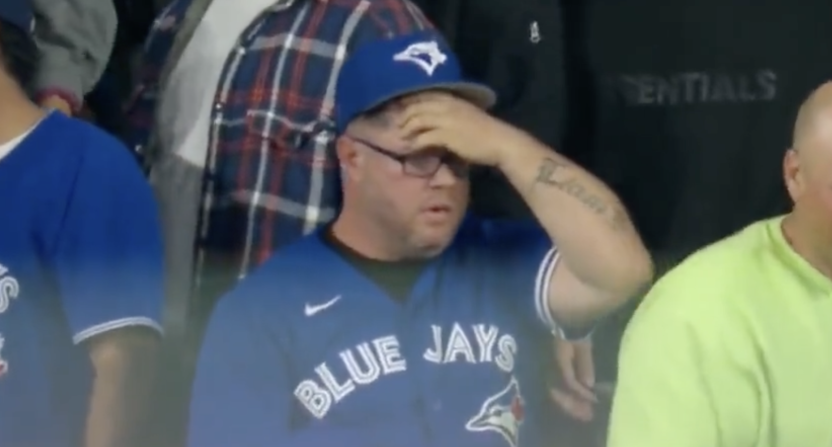 Following the scrum and battle in the stands for the historic baseball after Aaron Judge hit his 60th home run earlier this month, there was plenty of conversation about the chaos that would ensue when Judge eventually hit his 61st. Ultimately, that never happened as the baseball landed harmlessly into the bullpen. But one Toronto Blue Jays fan came just inches away from catching the ball – and he’s speaking out about it.

The man’s name is Kyle Mulligan, and he appeared on Jimmy Kimmel Live on Thursday night to talk about the experience that he said left him feeling “terrible.”

Kimmel asked him to re-live the gut-wrenching moment where he nearly caught the ball, and Mulligan explained that he was very confident he would catch the ball heading into the game, but that he missed it by “two inches.”

“From my perspective, I went to that game thinking I was going to catch that ball,” Mulligan said. “I told everyone I know I’m going to come home with that ball. I knew it was coming. I was ready for it. I went for it. And I think Frankie Lasagna – the guy that everyone thinks I am – bumped my glove a little and I missed it by two inches.”

Had Mulligan caught the ball, he said that he would have sold it to put his children through college.

“I would have put these kids of mine through college,” Mulligan said. “They’ll be alright still, but that would have helped. Six figures, right?”

For his misfortune, Kimmel is giving a kind, but hilariously fitting gift to Mulligan and his wife, paying for a trip to New York on New Year’s Eve “to watch the ball drop.”